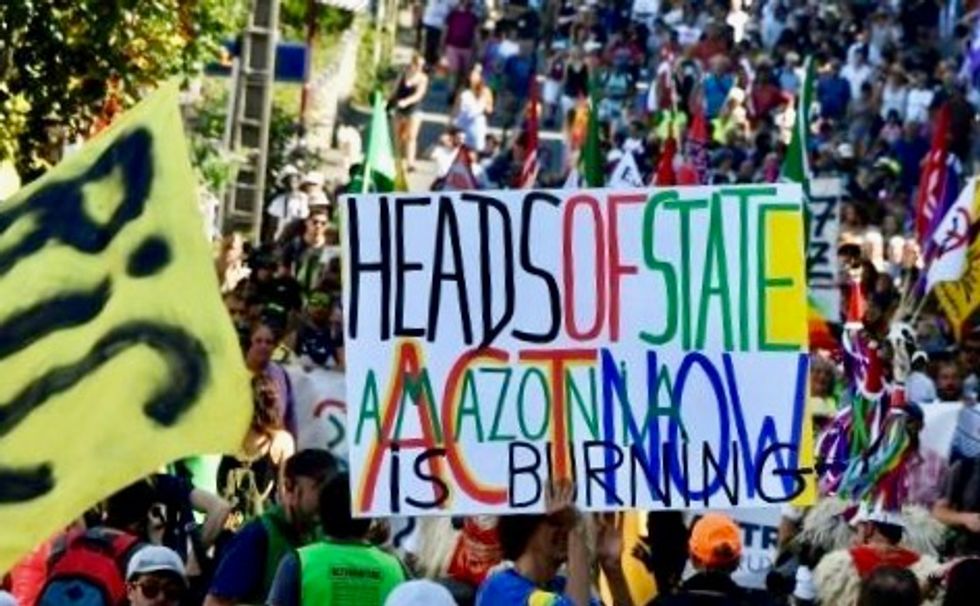 More than 9,000 anti-G7 protesters joined a mass march across the French-Spanish border on Saturday as world leaders arrived for a summit in Biarritz just hours after activists clashed with police.

Since Monday, anti-capitalist activists, environmentalists and other anti-globalisation groups have begun flocking to southwestern France for a counter-summit which they insist will be peaceful.

Biarritz is a popular tourist destination that would normally be basking in its annual summer boom, but with US President Donald Trump and other world leaders flying in for three days of talks, the resort was on lockdown.

"Heads of state: act now, Amazonia is burning!" read one banner as the huge crowd rallied under cloudless blue skies in the French coastal town of Hendaye, the slogan referring to the wildfires ravaging the world's largest rainforest.

Waving thousands of flags, they marched across the Bidassoa River heading for the Spanish town of Irun, chanting slogans and playing drums.

The demonstrators were an eclectic mix of environmental activists, families and anti-globalists, AFP correspondents said.

Among the crowd were even a group dressed in traditional Basque shepherd costumes, with red, white and green Basque flags as far as the eye could see.

The rally ended shortly before 2:00 pm (1200 GMT) with no major incidents, according to an AFP reporter on the scene.

But authorities remain on high alert, with Biarritz on lockdown and police deployed en masse in the neighbouring town of Bayonne as well to keep protesters at bay.

Overnight, 17 people were arrested and four police lightly injured when clashed erupted in Urrugne near the Spanish border some 25 kilometres (15 miles) south of the resort.

"I want to call for calm and for unity," French President Emmanuel Macron said in an address to the nation just hours before the official opening of the summit at which world leaders were to address the Amazon crisis along with other divisive global issues.

"We won't be able to face all these big challenges if we don't act together," he said.

Friday night's confrontation occurred as activists tried to block police from reaching a site where they had set up camp, with police firing tear gas and using controversial rubber rounds known as LBDs to disperse them, AFP correspondents said.

Earlier on Friday, police blocked several hundred demonstrators from reaching a roundabout on the road between Biarritz and the Spanish border.

France has deployed more than 13,000 police and gendarmes to secure the event amid fears of disturbances by radical anti-capitalist groups, anarchists and the "yellow vests" who have staged months of anti-government protests.

But demonstrators insist their protests will be peaceful.

"It's important to show that people are mobilised and do not accept the type of world they're offering us," said Elise Dilet, a 47-year-old activist with Bizi, a Basque anti-globalisation group.

"We want the march to be totally peaceful and even if we are concerned about scuffles, we have tried to put everything in place so that doesn't happen."

A raft of unprecedented security measures has been put in place for the summit, with the picturesque Grand Plage beach off-limits to everyone except delegates and those accredited for the summit.

Earlier this week, police arrested three young activists from Germany who were carrying a tear gas canister, an icepick and wrenches along with documents "linked to the extreme left", prosecutors said.

They were charged with planning violence, sentenced to several months prison and banned from returning to France.

In anticipation of trouble, France has set up a special magistrates' court, with 17 prosecutors and 70 lawyers on hand, as well as holding cells with capacity for 300 people for anyone caught breaking the law.

On Monday, they also briefly detained another five people for calling for attack on a hotel slated to accommodate police during the summit.