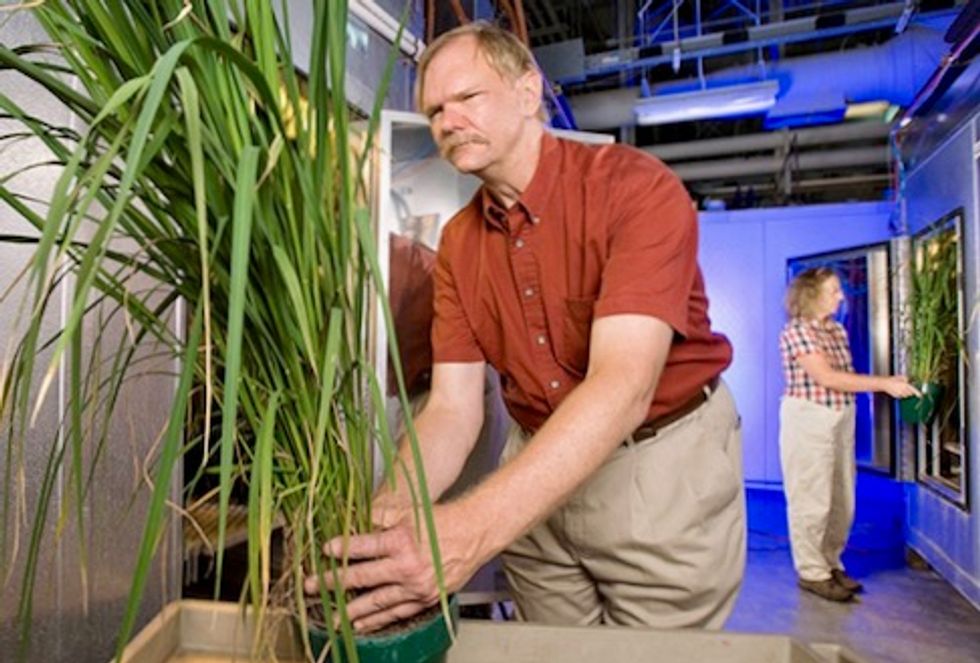 Rep. Chellie Pingree tweeted, "Once again, the Trump admin is silencing our scientists."

The exodus of federal scientists in the era of President Donald Trump continued Friday as 62-year-old plant physiologist Lewis Ziska left the U.S. Department of Agriculture "over the Trump administration's efforts to bury his groundbreaking study about how rice loses nutrients due to rising carbon dioxide in the atmosphere," Politico reported Monday.

Ziska—who worked at USDA under five presidents, both Republicans and Democrats—charged in an interview with Politico that he left the department's Agricultural Research Service (ARS) because the USDA tried to block the public dissemination of his research on how the human-caused climate crisis's impact on rice could threaten the nutrition of 600 million people. The study, Politico reported, was internally cleared at the department and peer reviewed prior to its publication in the journal Science Advances last year.

USDA, in a statement to the outlet, said that "this was a joint decision by ARS national program leaders—all career scientists—not to send out a press release on this paper" based on scientific disagreement, and the decisions involving the study weren't politically motivated.

"You get the sense that things have changed, that this is not a place for you to be exploring things that don't agree with someone's political views," Ziska said about the current environment at the USDA. "That's so sad. I can't even begin to tell you how sad that is."

Ziska's resignation comes after the departures of Rod Schoonover, a State Department official who claimed the administration blocked the submission of his report on the climate crisis and national security to a U.S. House committee, and Maria Caffrey, a National Park Service employee who wrote for The Guardian last month, "In February 2019, I lost my job because I was a climate scientist in a climate-denying administration."

Politco previously reported on the Trump USDA refusing to publicize dozens of government-funded studies that warn about the climate emergency's consequences or to release a "multiyear plan that outlines how the department should help agriculture understand, adapt to, and minimize the effects" of the crisis.

Turns out the "swamp" that @realDonaldTrump wants to drain isn't lobbyists it's civil-servant scientists. #USDA rel… https://t.co/MzDDxeCDHF
— Timothy A. Wise (@Timothy A. Wise)1565014623.0

The overriding fear among scientists within USDA, Ziska said, was that the administration would take an axe to the department's science budget, and research priorities that perhaps didn't align with the administration's agenda would be the first to go. (The Trump administration has repeatedly proposed significant cuts to ARS' budget, but Congress has so far largely kept funding flat.)

Anything related to climate change was seen as extremely vulnerable, he said.

"We were careful," he explained. "And then it got to the point where language started to change. No one wanted to say climate change, you would say climate uncertainty or you would say extreme events. Or you would use whatever euphemism was available to not draw attention."

Ziska told Politico that by politicizing climate science, the administration is jeopardizing the future of agriculture on a global scale, which could have devastating consequences for human health. As he put it:

To ignore it. To just dismiss it and say 'oh that's political' ...I don't have the words to describe that. It's surreal. It feels like something out of a bad sci-fi movie.

Congresswoman Chellie Pingree (D-Maine), a member of the U.S. House Agriculture Committee, was among those who responded to news of Ziska's resignation by calling out the Trump administration for "silencing our scientists."

The Politico interview was not the only report that cast a spotlight Monday on the Trump administration's impact on government-backed climate research.

In a blog post for Scientific American, Jacob Carter, a research scientist for the Center for Science and Democracy at the Union of Concerned Scientists (UCS), wrote that  "the Trump administration has suppressed, censored, and threatened to fire many of its experts for the work they do, or simply for discussing scientific information that is politically contentious. In some cases, the Trump administration's actions are driving experts out." He pointed to Schoonover and former Environmental Protection Agency official Betsy Southerland as examples.

"Imagine the working culture for federal experts watching the Trump administration go on the offense against their own staff. What do you do to get your day-to-day work done? How do you continue to get your work funded? One option is to censor politically contentious words or phrases," Carter continued. "Self-censorship may not make headlines, but there is a lot of evidence that it's happening in the chilling environment the Trump administration has created for federal government experts."

Carter referenced his organization's August 2018 survey of 63,000 scientific experts across 16 federal agencies which revealed, as Common Dreams reported at the time, that "as the Trump administration continues to brazenly attack national environmental regulations, it is also 'sidelining science' within agencies, with staffers reporting issues including 'censorship and self-censorship, political interference in scientists' work, low morale, decreased agency effectiveness, and dwindling resources.'"

Next week, UCS and other partners will host a panel discussion in Albany, New York about the importance of federal science and how it can be safeguarded from political manipulation:

Hundreds of thousands of Americans in states led by Republican governors are expected to see drastic reductions in unemployment benefits.

"More than 1 million Americans will lose unemployment benefits early as a result of states' decisions to cut off federal aid to workers," CNBC reported Thursday. "By Thursday morning, at least 14 states, all led by Republican governors, had announced they would end their participation in pandemic-era unemployment programs."

Florida Gov. Ron DeSantis (R) is facing blowback for his continued efforts to spite the federal government and Centers for Disease Control and Prevention (CDC) at the expense of his own state's economic lifeline: the cruise industry in South Florida.

At the beginning of April, DeSantis signed an executive order to place a ban on vaccine passports. Even as the Norwegian Cruise Line CEO threatens to pull their ships from the Port of Miami if DeSantis does not lift the recently-passed measure, he is still refusing to do so. Because of DeSantis' order, businesses and other entities cannot require residents to show proof of vaccination.