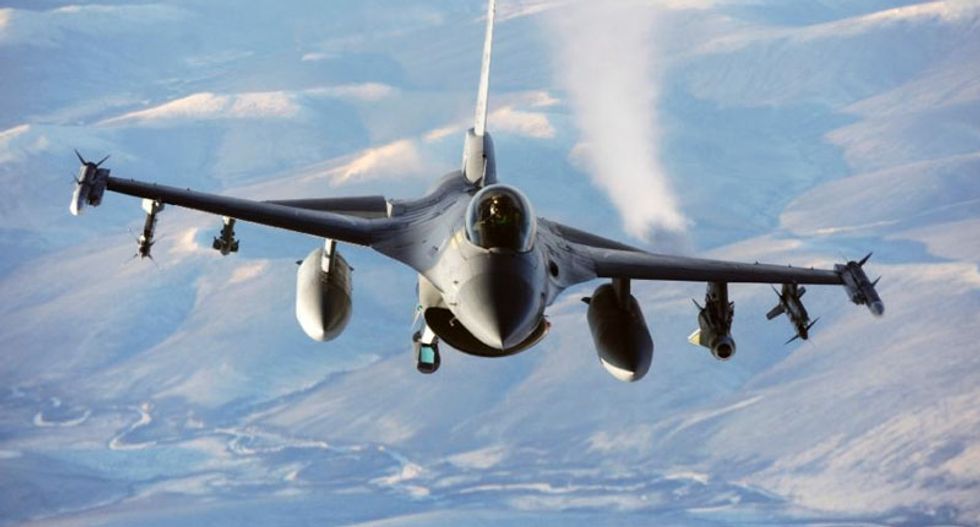 This US Department of Defense photo shows an F-16 Fighting Falcon aircraft as it flies over the Pacific Alaskan Range Complex on October 16, 2008 (AFP Photo/Jonathan Synder)

The Trump administration is reportedly advancing a massive arms sales to Taiwan as White House tensions with Beijing are rising.

According to the Washington Post, "The State Department late Thursday submitted the package for informal review, said the people familiar with the sale."

The $8 billion package includes 66 F-16 fighter jets and tees up the possibility that China could sanction the U.S. companies involved in the weapons sales.

Democratic and Republican lawmakers, the Post continued, "questioned whether the White House would scuttle the sale to soften the ground for a U.S.-China trade deal, or otherwise use the fighter jets as a bargaining chip in deadlocked negotiations."

The fighter jets are seen as particularly irksome to Beijing as it would give Taipei an enhanced capability to potentially conduct military operations in the Taiwan Strait, the narrow waterway that separates China from Taiwan.

While the U.S. has long provided arms to Taiwan as part of the 40-year-old Taiwan Relations Act, Beijing has frequently chafed at those sales, protesting them as a violation of China's sovereignty despite the Chinese Communist Party having never governed the island.

President Donald Trump, however, has taken a different approach from previous administrations by ramping up arms sales to Taiwan. Writing at South China Morning Post last month, Cary Huanglaid out the contrast.

However, presidents Bill Clinton, George W. Bush, and Barack Obama were all largely reluctant to approve large or regular arms deals to Taiwan, out of fear of angering Beijing.

Since coming into office, the Trump administration, which is stacked with China hawks and friends of Taiwan, has pushed for what is called the "normalization of arms packages," both big and small. A new system of "normalized and multilevel" arms sales has resulted in more such "frequent" sales. Indeed, in the past two years, Trump has approved four separate packages, more than any of his predecessors since 1979. The first, valued at US$1.4 billion, came in June 2017; the second, worth US$330 million, last September; the third, a US$500 million F-16 upgrading package, in April; and the fourth, last [month].

That July sale was worth $2.2 billion and included over 100 Abrams tanks and 250 Stinger missiles.

Reuters reported Thursday on what Taiwan sees as a backdrop for the weapons aquisition:

China, which suspects [Taiwan President] Tsai of pushing for the island's formal independence, has been ramping up military pressure on Taiwan, which includes encirclement drills around it and flying jets across a maritime border separating the two sides, a move Taipei called "provocative."

"To react to the enemy's threat and to ensure national security," Taiwan's defense ministry said in a statement, "the defense budget continues to grow stably."