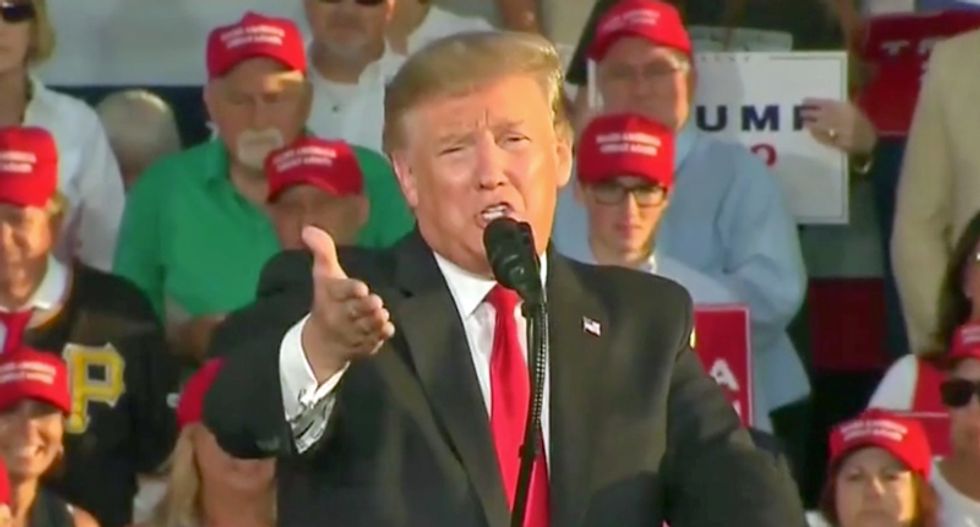 President Donald Trump heads to Ohio Thursday for his first rally since the infamous "send her back" chant. He told the press that he's hoping his supporters don't do the chant but "you'll see" what happens if they do. Trump likes to leave cliffhangers, treating his presidency like a reality television show.

Political pundits aren't sure if he'll stop the chant, egg it on or tell his supporters that the "fake news" thinks they're racists for chanting. One Republican analyst on CNN, however, said that it's clear the president can't control his white supremacist supporters.

"He's not in control of this," said Amanda Carpenter. "Look, President Trump opened the Pandora’s box of racism during the 2016 election talking about Judge Curiel, David Duke, and he’s not in control of this thing anymore. It’s how we ended up with something like Charlottesville. Then he had to make a statement about how there are 'very fine people on both sides.' Because, those are the people, not all, some of the loyal base that shows up to these rallies. So, to me the more interesting question isn’t how he reacts, how he’s being led around by the nose by the worst elements in this country."

Intercept contributor Mehdi Hasan agreed that Trump gets "led around by lots of people," but that he is the one "clearly inciting" this.

"Stuff that he's doing deliberately, his advisers are briefing the Washington Post that this is part of the strategy to get the base out. It's disgusting," he continued. "He knows what he's doing when he's tweeting about these four American citizens (three of them born in this country), saying they should 'go back to the crime-infested places from which they come.' Using the word 'infestation' always in relation to people of color."

He went on to say that telling someone to "go back to where they came from is the literal definition of racism, as experienced by those of us who grew up listening to that chant."

Hasan warned that the rally Thursday night is likely going to be "really depressing" and "another hate rally" and Trump likely "won't control the crowd" because "he's the one inciting the crowd."