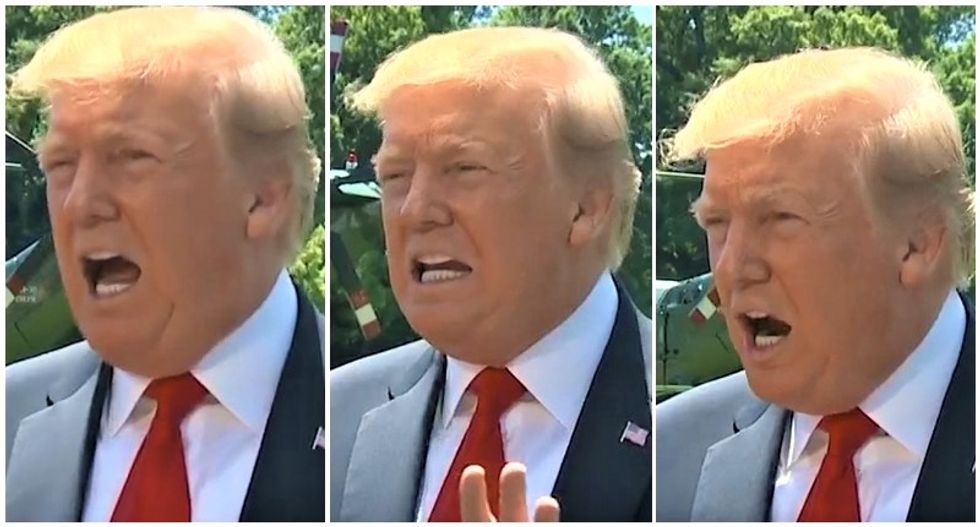 President Donald Trump on Wednesday spoke in front of reporters for a full 40 minutes in which he made numerous unhinged statements about American Jews, the Prime Minister of Denmark, and the economy.

Trump's lengthy rant featured too many strange and offensive moments to quickly summarize -- so we've written up a rundown of the seven insane moments.

2.) Trump bizarrely declares himself "the chosen one" in a rant about trade with China. While discussing his trade war with Beijing, the president insisted that someone had to do something about trade imbalances and then evoked explicitly religious imagery to back up his point.

"I am the chose one!" he said while looking upward toward the sky. "Somebody had to do it!"

3.) Trump erupts at the Danish prime minister for spurning his plan to buy Greenland. After Trump abruptly canceled his planned visit to Denmark on Tuesday night, he went off on a tirade against the country's leader for supposedly treating him poorly.

"I thought the prime minister's statement that [buying Greenland] was an 'absurd idea' was nasty," the president fumed. "I thought it was an inappropriate statement. All she had to do was say, 'No we wouldn't be interested!' We can't treat the United States of America the way they treated us under President Obama. I thought it was a very not nice way of saying something."

4.) Trump yells at NBC News' Peter Alexander. Although the president regularly complains about the "fake news media," he singled out NBC's Alexander for particular scorn.

"This guy is the most biased reporter!" he shouted. "NBC -- you know, I made a lot of money for NBC with 'The Apprentice,' and I used to like them, but they are the most biased. Peter is such a biased -- you should be able to ask the same question in a better way."

5.) Trump threatens to release ISIS fighters into Germany and France. The president chided key American allies for not taking on ISIS fighters captured over the past few years and said that unless they met his demands, he would simply release them back to their countries of origin.

"We're holding thousands of ISIS fighters right now," the president said. "And Europe has to take them. And if Europe doesn't take them, I'll have no choice but to release them into the countries from which they came. Which is Germany and France and other places."

7.) Trump lobbies for Russia to be let back into the G8 because their only crime was "outsmarting Obama." The president once again made a push for Russia to be readmitted to the G8 despite the fact that the country illegally annexed the territory of Crimea and still hasn't given it up.

"That was outsmarting Obama," Trump said. "They took over Crimea during his term, not mine... Putin made a living on outsmarting President Obama."