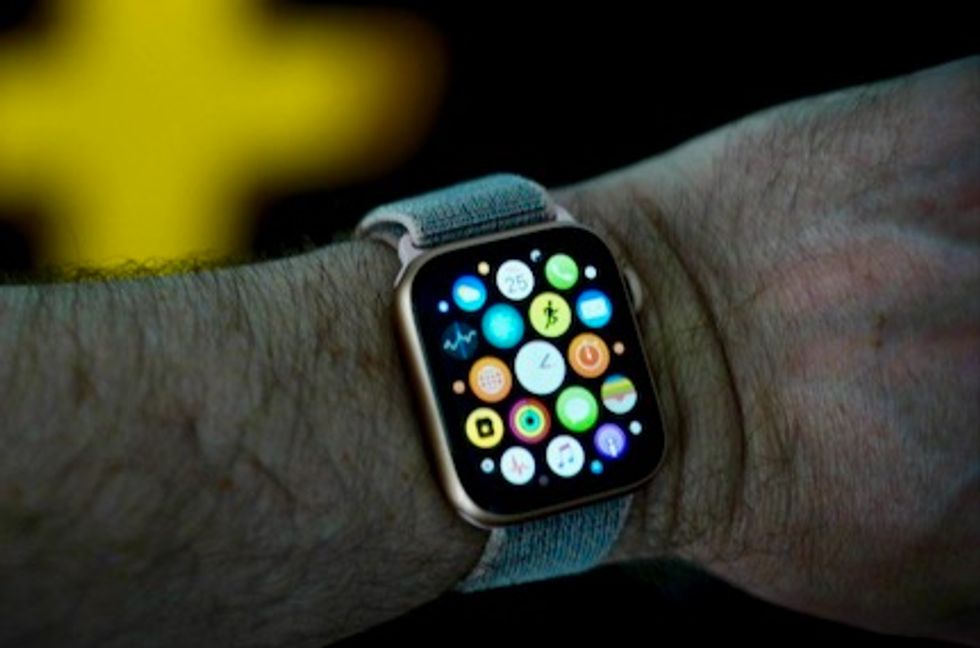 The Apple Watch is among the personal technology devices which could be used by a newly-proposed agency to draw information about people's health and behavior, with the stated goal of identifying risk factors for a mass shooting. (Photo: Jaap Arriens/NurPhoto via Getty Images)

One critic called the proposal, which expands on Trump's claim that mental illnesses, not guns, are to blame for gun violence, "nothing less than chilling."

In keeping with his insistence that people with mental illnesses, and not the wide availability of guns, are to blame for the epidemic of gun violence and mass shootings in the U.S., President Donald Trump is reportedly considering a new project aimed at detecting mental health issues to stop shootings before they happen.

As The Washington Post reported Thursday, the Trump administration has worked with Bob Wright, a close friend of Trump's and his collaborator on the reality show "The Apprentice," to develop a proposal for a new federal agency that would be called the Health Advanced Research Projects Agency (HARPA), within the Health and Human Services Department.

HARPA would be modeled after and led by a top official at the Pentagon's research office, the Defense Advanced Research Projects Agency (DARPA), which has developed drones, artificial intelligence meant to merge with deadly weapons, and technology to help U.S. soldiers detect safety threats during deployments.

Instead of developing military equipment, HARPA would draw information from people—gathered strictly from people who opt in to the program, the administration says—to identify "neurobehavioral signs" of "someone headed toward a violent explosive act."

As Sarah Orem, a postdoctoral fellow who researches disability rights, wrote on social media, HARPA's technology "deeply resembles" the Pentagon's, "which scans for 'possible threats' to soldiers at war."

"Except the 'threat' here is mentally ill Americans," Orem said.

Orem called the proposal "nothing less than chilling."

The Post reported that Wright first proposed the program in June 2017. He approached the administration again last week in the wake of two mass shootings in El Paso, Texas and Dayton, Ohio, in which 31 people were killed this month.

Talks about HARPA were reopened as Trump was assuring the NRA that he would not pursue universal background check legislation to prevent mass shootings, and doubling down on previous claims that people with mental health challenges are the primary cause of shootings—suggesting to reporters last week that the U.S. should institutionalize mentally ill people en masse to prevent violence.

Contrary to the president's claims, studies have shown that mental health issues are not a major risk factor for perpetrating violence.

Trump has reportedly been receptive to the HARPA proposal and the administration is currently considering a potential project within the agency called "Safe Home" (Stopping Aberrant Fatal Events by Helping Overcome Mental Extremes), which would involve a "sensor suite" using AI to identify people who could be prone to violence.

Just as DARPA has partnered with private companies, HARPA would potentially use personal technology devices like Apple Watches, Google Home, and FitBit to identify behavioral or mental health changes.

Although officials insist the information would be gathered from people who volunteer it, some critics raised alarm about the use of products which have already come under scrutiny for violating users' privacy, to gather health information.

"While mental health research is, in and of itself, a worthy and important endeavor, the prospect of a computer culling people's smart home data in the pursuit of red-flagging potential mass shooters feels uniquely dystopian, particularly given America's long, dark history of domestic surveillance," wrote Rafi Schwartz at Splinter News.

Others noted that the details which have been released about HARPA thus far are vague—leading to questions about what the government plans to do after it determines that someone exhibits signs that they could be dangerous to the community.

"This agency isn't being proposed to stem gun violence. It never was," wrote Orem. "Tons of research suggests that gun violence does not correlate or stem from mental illness. This is about policing disability and cognitive difference."

"And remember: because diagnoses of mental illness have been used to police people of color...women, and queer people, policing disability results in policing broader networks of minority groups," she added.

by
Julia Conley, staff writer
Guns
Report typos and corrections to: corrections@rawstory.com.
Like this article ? Text `Support` to 50123 to donate.
READ COMMENTS - JOIN THE DISCUSSION