Trump orders freeze on all Venezuelan government assets in US 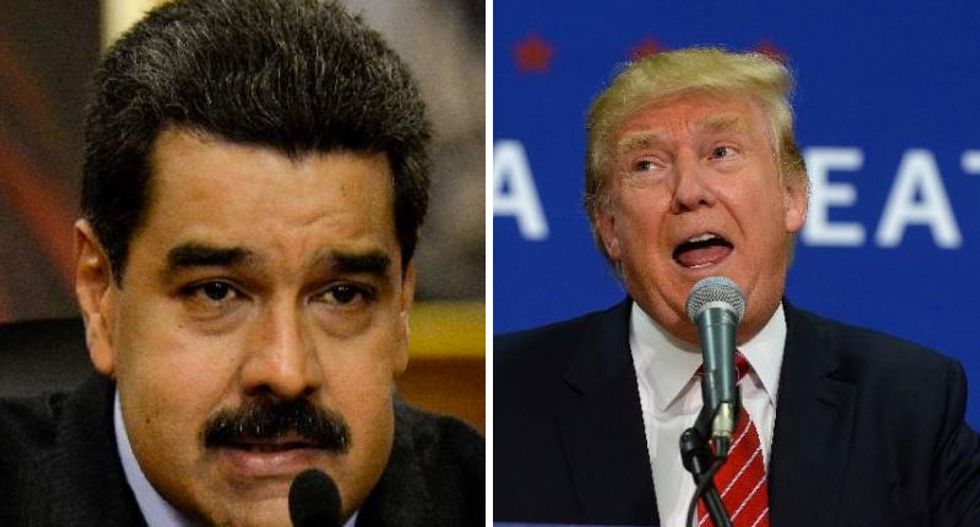 President Donald Trump on Monday ordered a freeze on all Venezuelan government assets in the United States and barred transactions with its authorities, in Washington's latest move against President Nicolas Maduro.

Trump took the step "in light of the continued usurpation of power by Nicolas Maduro and persons affiliated with him, as well as human rights abuses," according to the order.

The Wall Street Journal said the move was the first against a Western Hemisphere government in over 30 years, and imposes restrictions on Caracas similar to those faced by North Korea, Iran, Syria and Cuba.

Asked last week if he was considering a "blockade or quarantine" of Venezuela, Trump responded: "Yes, I am."

These assets "are blocked and may not be transferred, paid, exported, withdrawn, or otherwise dealt in," the order said.

The measure also bars transactions with Venezuelan authorities whose assets are blocked.

Venezuelan opposition leader Juan Guaido declared himself interim president earlier this year in a bid to oust Maduro that was backed by the United States and dozens of other countries.

But Maduro has refused to yield, and in the executive order Trump blamed his government for "ongoing attempts to undermine Interim President Juan Guaido and the Venezuelan National Assembly's exercise of legitimate authority in Venezuela."

Guaido's efforts have meanwhile stalled despite the international support and widespread discontent with Maduro, who has been able to cling to power with the backing of the country's security forces.

The two sides began negotiating in Norway in May, with the most recent round of talks opening last week in Barbados.

Both Guaido and Maduro have "reiterated their willingness" to resolve the political crisis, mediator Norway has said, but the talks have produced no resolution yet.

The two sides have in the past laid out starkly opposing positions, with Guaido and the opposition calling Maduro an "usurper" and accusing him of having rigged the 2018 poll that saw him re-elected.

They want him to stand down so new elections can be held.

Maduro has refused to resign and says the negotiations must lead to "democratic coexistence" and an end to what he describes as an attempted "coup" orchestrated by the United States.

Despite the loss of momentum, Guaido -- the speaker of the opposition-controlled National Assembly -- remains the greatest threat to Maduro, even though the body has been effectively rendered powerless by Caracas.

The oil-rich, cash-poor country has been in a deep recession for five years. Shortages of food and medicine are frequent, and public services are progressively failing.

Around a quarter of Venezuela's 30 million-strong population is in need of aid, according to the United Nations, while 3.3 million people have left the country since the start of 2016.

The International Monetary Fund says inflation will hit a staggering one million percent this year while the economy -- already in recession for five years -- will shrink by 35 percent.

Topeka man tells judge he will defend himself from charges in Jan. 6 attack on US Capitol

A Topeka man who faces federal charges for his role in the Jan. 6, 2021, attack on the U.S. Capitol wants to represent himself because his court-appointed attorney lacks computer skills.

Will Pope, in a letter to the Washington, D.C., judge who is handling his case, also claims his indictment was based on inaccurate information presented by prosecutors.