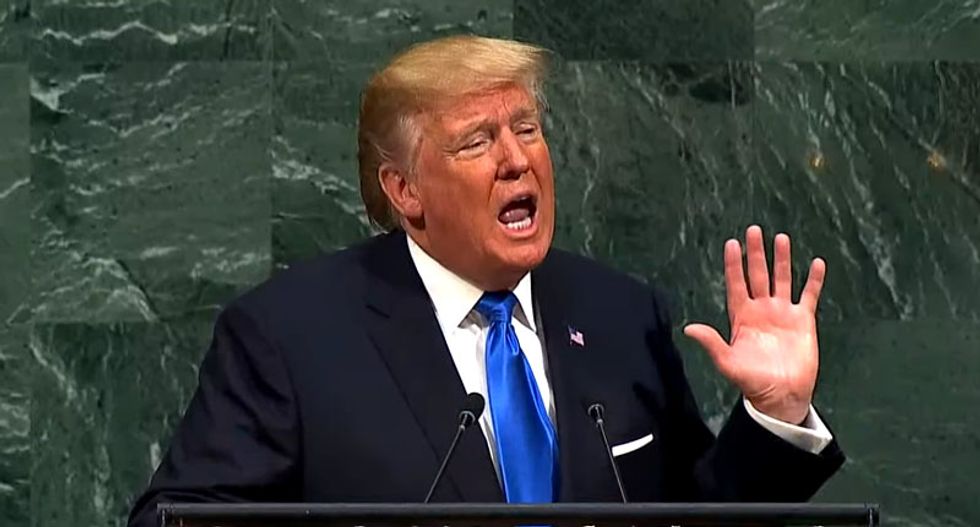 President Donald Trump has vowed multiple times over the past two-and-a-half years to unveil his own replacement plan for the Affordable Care Act, but so far no actual plan has come to light.

As noted by CNN fact checker Daniel Dale, Trump was asked by a reporter in New Hampshire this week to describe his health care plan, and the president responded with a stream of gobbledygook.

Instead of talking about his own health care plan, the president then proceeded to make false statements about Medicare for All.

"On top of everything else, they're looking at 80, 90, 95 percent tax, because there's no -- there's no way they can afford it," he said. "But people don't want to go to a hospital, to go to a doctor. They don't want to go. They want to have their own doctor, number one, and we went through this with Obamacare, which we got rid of the individual mandate, by the way, which is very important."

After all this, the president finally pivoted back to talking about his own health care plan, but he offered zero details about what it would contain.

"But we have a great health care plan," he said. "If we get the House, we hold the Senate, we keep the presidency, we're going to have great health care, much better than Obamacare, at much less cost."

'Every day is the Red Wedding': Turmoil in Kanye West camp after 'disastrous media appearances'

According to a report from the Daily Beast, multiple members of Kanye West's rightwing entourage have been purged or left their employment with the rapper following a series of "disastrous media appearances" where he has praised Adolph Hitler among other controversial statements.

As the Beast reports, conservative demagogue Milo Yiannopoulos is now on the outs with West -- also known as "Ye" -- following his brief tenure as an adviser to West's fledgling 2024 presidential campaign.

When they were just eight years old, Spanish twins Sergio and Javier Torres set a goal: they wanted to become chefs who were among the top in their field.

To achieve this they strategically split up to get training in different esteemed kitchens around the world, published books on cooking and presented a popular TV show.