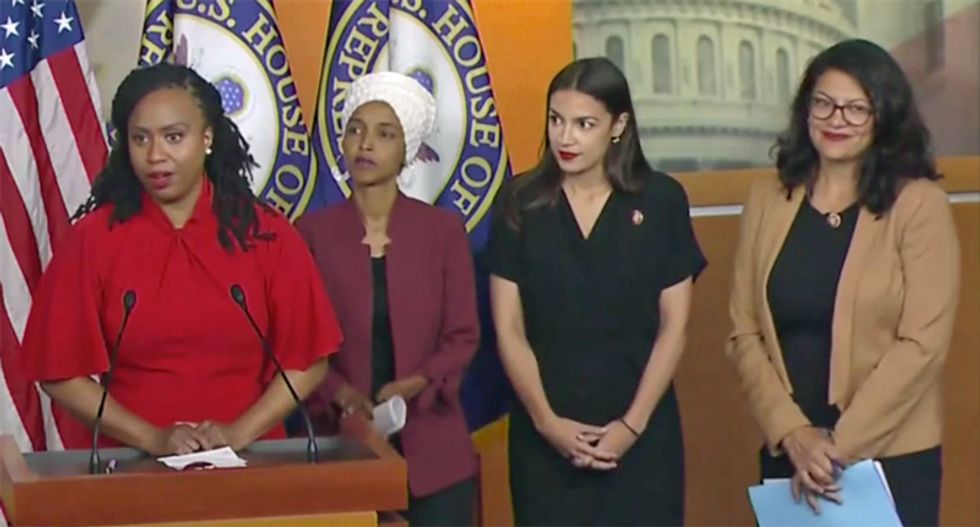 While on vacation at his New Jersey golf club, President Donald Trump took to his favorite social media platform for another attack on a woman of color in Congress.

The commander-in-chief blasted Rep. Rashida Tlaib (D-MI) -- and her grandmother.

Trump had demanded that Israel deny Tlaib and Rep. Ilhan Omar (D-MN) entry into the country. The two are the first two female Muslims elected to Congress.

Tlaib responded that she refused to allow Israel to "humiliate me and my family."

"Visiting my grandmother under these oppressive conditions meant to humiliate me would break my grandmother's heart. Silencing me with treatment to make me feel less-than is not what she wants for me – it would kill a piece of me that always stands up against racism and injustice," Tlaib said.

"Rep. Tlaib wrote a letter to Israeli officials desperately wanting to visit her grandmother. Permission was quickly granted, whereupon Tlaib obnoxiously turned the approval down, a complete setup," Trump claimed, neglecting to mention that he had urged Israel deny approval or that there were onerous conditions placed on the approval.

"The only real winner here is Tlaib’s grandmother. She doesn’t have to see her now!" Trump added.

Trump the claimed Rep. Alexandria Ocasio-Cortez (D-NY) was jealous that other members of The Squad were in the spotlight.

"Like it or not, Tlaib and Omar are fast becoming the face of the Democrat Party. Cortez (AOC) is fuming, not happy about this," Trump claimed, without offering any evidence.