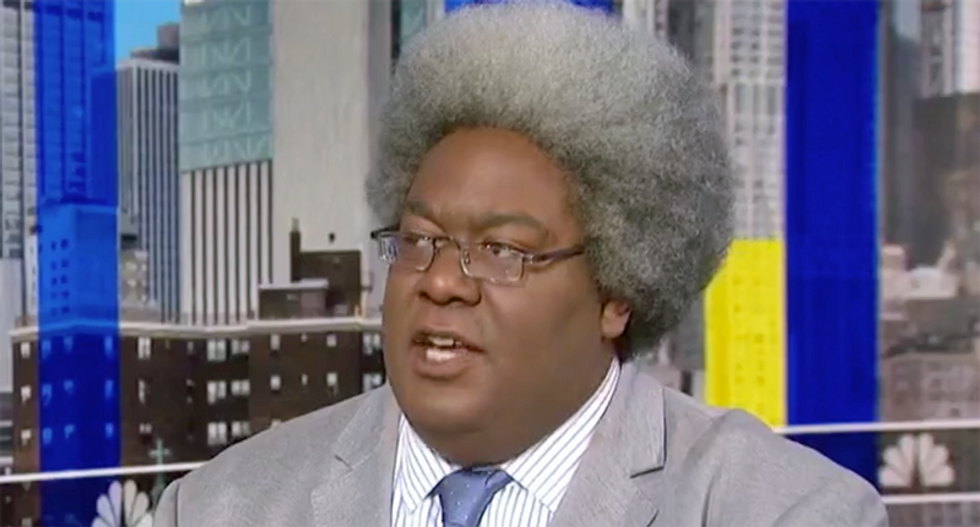 Above the Law executive editor Elie Mystal on MSNBC (screengrab)

On Friday, Trump demanded that American companies look for alternatives to China.

"Our great American companies are hereby ordered to immediately start looking for an alternative to China, including bringing your companies home and making your products in the USA," Trump tweeted.

Of course, the president has no power to order such a thing.

For all of the Fake News Reporters that don’t have a clue as to what the law is relative to Presidential powers, Ch… https://t.co/pdIWsorYfC
— Donald J. Trump (@Donald J. Trump) 1566619112.0

However, that power may not exist in this case, Above the Law executive editor Elie Mystal explained to MSNBC Joy Reid.

"The authority Trump is arguing that he has is something called the International Emergency Economic Powers Act. It works much like the National Emergencies Act, which when the president says, i feel like this is an emergency, he wide latitude to do all kinds of crazy things much like a centrally planned economy like China would have the authority to do," Mystal explained.

"First of all, there is an important part of the statute which says he can only declare an emergency under unusual and extraordinary circumstances. China existing is not unusual or extraordinary, it's just a thing that always has happened," he noted. "So there is very little legally binding precedent to suggest that Trump can declare a national emergency, a national economic emergency, based on China existing."

"The times this has been used before were against Iran when they took actual American hostages -- that's one of the last time this was used," he noted.