US blacklists Iranian tanker in Mediterranean 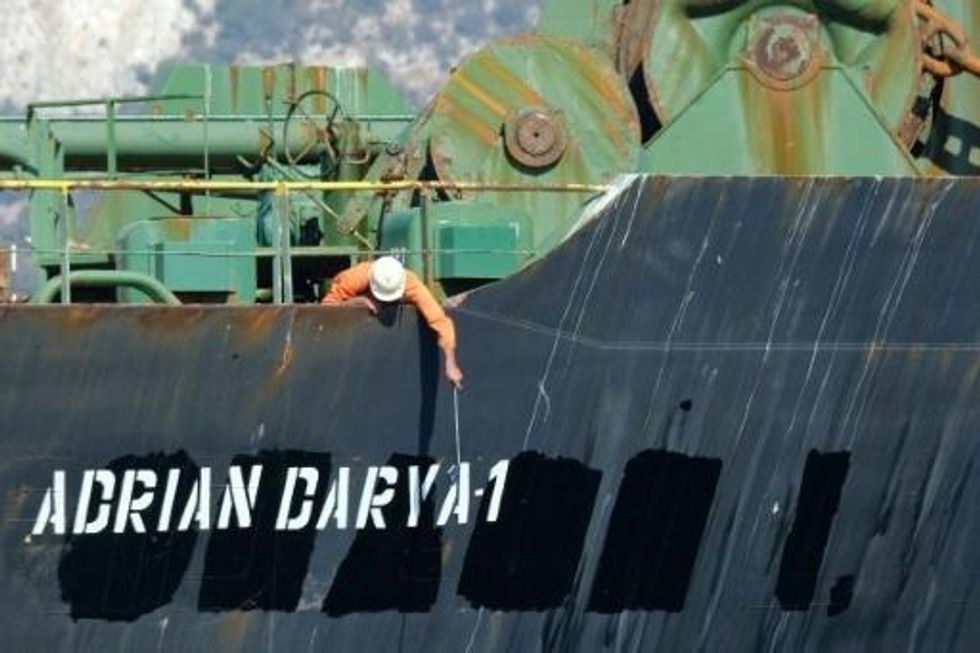 The United States has blacklisted the Iranian tanker Adrian Darya, saying it had "reliable information" it was transporting oil to Syria in defiance of wide-ranging sanctions on the regime of Bashar al-Assad.

Previously known as Grace 1, the vessel was seized in July by British Royal Marines and held in Gibraltar for six weeks on suspicion it was delivering oil for Tehran's ally Damascus.

The British territory released the ship -- despite US protests -- after it said it had received written assurances from Iran that the vessel would not head for countries under European Union sanctions.

Tehran later denied it had made any promises about the ship's destination.

"We have reliable information that the tanker is underway and headed to Tartus, Syria," US Secretary of State Mike Pompeo said in a tweet Friday.

The US Department of Treasury said the vessel was "blocked property" under an anti-terrorist order, and "anyone providing support to the Adrian Darya 1 risks being sanctioned".

The ship's captain, Akhilesh Kumar, was also blacklisted under the order.

Since its release from Gibraltar, the Adrian Darya has been bouncing around the Mediterranean, its every move followed with intense speculation. The vessel was in waters north of Cyprus as of 0745 GMT, according to the MarineTraffic tracking website.

Lebanon had earlier dismissed Turkish claims that it would receive the ship, which has a cargo of 2.1 million barrels worth around $140 million.

While Iran has denied selling the oil to Damascus, experts said the likely scenario was for a ship-to-ship transfer, with a Syrian port as the final destination.

Maritime traffic monitors had shown that the Adrian Darya's latest listed destinations, which are not necessarily the next approved port of call, were in Turkey.

After tracking sites showed Mersin as its destination, it then switched to Iskenderun, prompting a reaction from Turkey's foreign minister Friday.

"This tanker is not heading actually to Iskenderun (in Turkey), this tanker is heading to Lebanon," Mevlut Cavusoglu said during a visit to Oslo.

Lebanon swiftly dismissed the scenario, stressing that it never buys crude oil because it does not have refineries, and adding that it had not received any docking requests from the tanker.

Iran said Monday it had "sold the oil" aboard the tanker and that the owner will decide the destination.

It did not identify the buyer or say whether the oil had been sold before or after the tanker's detention in the Strait of Gibraltar.

It also said it could not name the actual destination due to "economic terrorism" by the United States and its sanctions on Iran's oil sales.

The Adrian Darya 1 set sail for the eastern Mediterranean three days after it was released.

The specialized TankerTrackers social media account noted Friday after the vessel listed Iskenderun as its destination that little could be read into it.

"Consider this just a record update rather than anything substantial. We believe a transfer is still a few days away. Turkey will not import this oil," it said.

It earlier described it as "aimlessly moseying around the Med".

Tensions between arch-enemies Iran and the US have soared ever since Washington stepped up its campaign of "maximum pressure" against Tehran and reimposed sanctions after leaving the landmark 2015 nuclear deal last year.

Syria, which has ports on the Mediterranean, is also under a raft of US and European sanctions over its eight-year-old conflict.