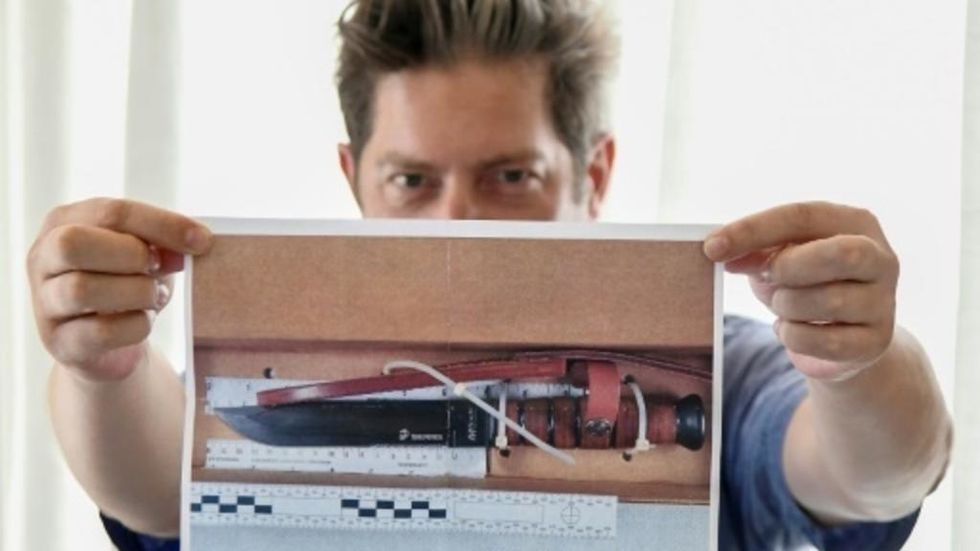 The father of a US teen arrested in Rome over the killing of an Italian police officer said Thursday his son didn't know his friend was carrying a knife.

Gabriel Natale Hjorth, 18, has been charged with aggravated homicide along with his friend Finnegan Elder, 19, following the death of officer Mario Cerciello Rega, who was stabbed to death in a botched drug bust last week.

Elder has confessed to stabbing Cerciello, 35, with a US Marine partially-serrated, close-quarters combat knife, according to police. But he says he mistook the plain-clothes officer for a dangerous drug dealer and used the weapon in self-defence.

"Gabriel didn't know his friend was armed. He only found out what happened, that the officer had died, after his arrest," Fabrizio Natale told the Corriere della Sera daily after visiting his son in Rome's Regina Coeli jail.

Elder was carrying the knife on his person, and police said Tuesday it was "impossible" Natale did not know he had it.

"The meeting was emotional but very hard for both of us. He's in a bad state," Fabrizio Natale said after seeing his son.

The 18-year-old is alleged to have held Cerciello's partner Andrea Varriale down during the attack in Rome's upmarket Prati neighbourhood, and possibly hidden the murder weapon afterwards.

"I share the pain of the officer's family. But I am convinced my son is innocent," Natale said.

The teen spent the hour-long meeting with his father in tears, the Corriere said.

Natale brought his son a copy of Ernest Hemingway's novel "The Old Man and the Sea" and an Italian-English dictionary, but was forbidden to give him the latter as it was a hardback with corners considered too sharp to be safe, the daily reported.

He was allowed to hand over bread and cold cuts, but not toothpaste, deodorant, an electric toothbrush, or a large towel considered a hanging risk, it added.

The two Californian teens had been drinking when the attack took place, and Elder was also on prescription drugs, police said.

Cerciello and Varriale had been tasked with intercepting the pair after an intermediary on a drug deal reported them to the police for stealing his bag after they were sold aspirin in the place of cocaine.

The teens have accused each other of being the one to have hidden the hastily-cleaned knife, which has an 18-centimetre (seven-inch) blade, in the false ceiling of their hotel room.

Police on Wednesday returned to the room to dust the ceiling for prints.