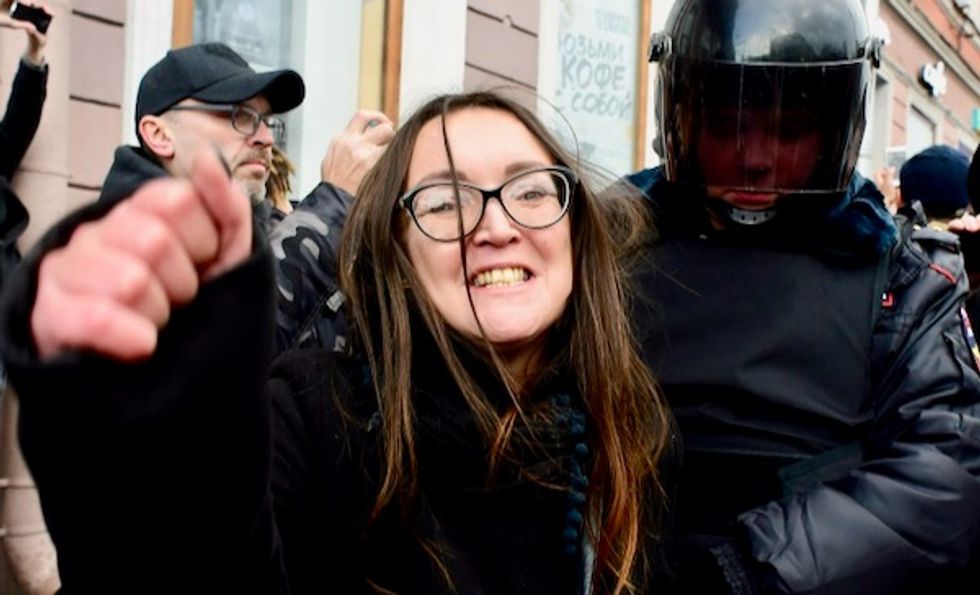 When LGBT activist Yelena Grigoryeva found her name on a hit list of a "gay-hunting" group, she did not appear to take the threat seriously.

The group called itself "Pila", meaning "saw", after the series of Hollywood horror films of the same name, in which a serial killer plays games with his victims.

"That's just a threat," Grigoryeva wrote on Facebook early last month, posting a screen grab of the group's website on her page.

"This is not how crimes are committed."

On July 21, her body was found in bushes close to her home in Saint Petersburg, with at least eight stab wounds to her face and back. She was 41.

The murder has horrified Russia's LGBT community, even though there seems to be no firm evidence linking Pila directly to Grigoryeva's fatal stabbing.

"I do not know who these people are, but it's significant that people who think this way live among us," said activist Mikhail Tumasov, who has also received threats from Pila.

"Many people would like to do in reality what Pila is threatening us with. The idea has emerged that killing people over their sexual orientation is not just normal, but noble," he told AFP.

Russia's gays and lesbians are no strangers to violence, hate crimes and even homophobic murders.

But a vigilante group seeking to turn violence against LGBT people into a game and encouraging Russians to hunt them down for sport plumbs new lows, campaigners say.

Activists said the Pila website had been around for about a year, posting names and pictures of their targets and promising "awards" for attacks on them.

Prominent activist Igor Kochetkov accused authorities of doing little to stop it as he urged police to probe the website and the death threats against Grigoryeva.

AFP / OLGA MALTSEVARussia's LGBT community is no stranger to violence, hate crimes and even murders

"Dear police and other law enforcement agencies. It's time to get to work!" Kochetkov, whose name was also on the hit list, said in a recent video address.

"Start protecting all citizens! And if you believe that people like us should not be protected find yourselves a different job."

Pila's website has only recently been blocked, as have its channels on the popular encrypted messaging app Telegram.

But Pila has promised "to play until the end", despite the ban.

Late last month, investigators arrested a man suspected of killing Grigoryeva, suggesting the attack was the result of a personal dispute.

Then they said they had taken the wrong man and detained a new suspect.

But the investigators made no mention of the homophobic threats against the activist, implying she was killed by a drinking companion.

Separately, Russia's Anti-Extremism Centre said it could not conduct a probe into Pila because its website had been blocked.

They say Pila may not be made up of cold-bloodied killers, but that its main goal was to further terrorise Russia's beleaguered gay community.

"Pila is dangerous because it sows hatred. It inspires people to commit real crimes," said Alla Chikinda, spokeswoman for an LGBT support centre in the Urals city of Yekaterinburg.

The centre, too, has received threats from Pila, which called for it to be shut down.

"You will be the next victims of our game if you don't comply with our conditions," the group warned in a letter.

The Yekaterinburg centre has now installed video cameras and complained to the police.

Even though Russia decriminalised homosexuality in 1993, it remains a deeply homophobic society.

A rise in violence against gays has been seen since 2013, when Russia passed a law banning gay "propaganda" among minors.

At a G20 summit in Japan in June, President Vladimir Putin insisted Russia respected gay rights, but also made fun of gender identity.

"Transformers, trans... I don't even understand what this is," he said.

Activists say it should come as no surprise that groups like Pila did not fear punishment.

"They enjoy a feeling of impunity," said Vitaly Bespalov, editor at a gay online portal and one of the targets.

"They know they will face nothing for it."