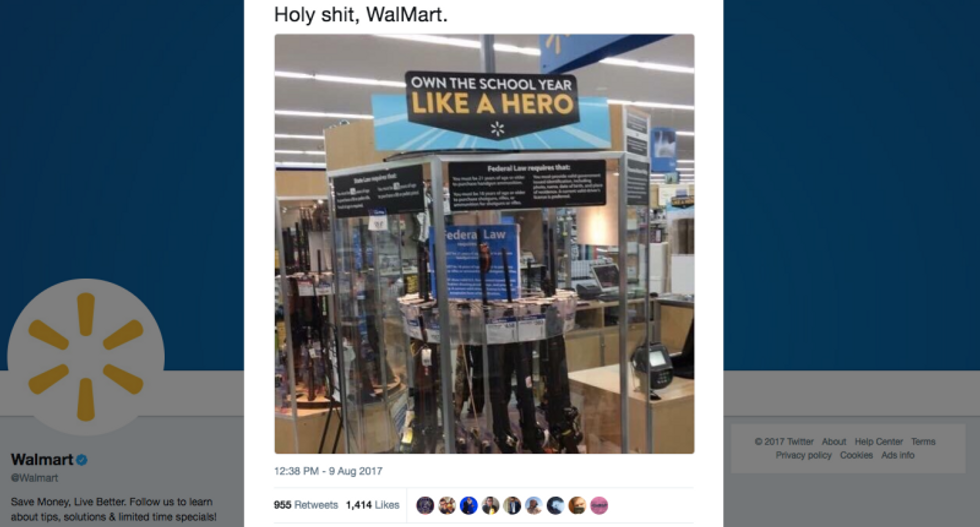 A sign reading, 'OWN THE SCHOOL YEAR LIKE A HERO' above a rack of rifles at Walmart

America's largest retailer has refused to stop selling guns after the latest massacre at one of their stores -- but will limit ads for video games.

Walmart has been pressured to stop selling firearms, including in a public letter to CEO Doug McMillon by New York Times columnist Andrew Ross Sorkin.

"You, singularly, have a greater chance to use your role as the chief executive of the country’s largest retailer and largest seller of guns — with greater sway over the entire ecosystem that controls gun sales in the United States than any other individual in corporate America," the open letter read. "What happened over the weekend was not your fault — but it is your moral responsibility to see that it stops."

"The 22 people who died in your store this past weekend deserve more than words of consolation to their families. They deserve a leader who is going to work to make sure it never happens again," the letter concluded.

But Walmart is instead cracking down on video games -- despite the fact there is no evidence they have anything to do with mass shootings.