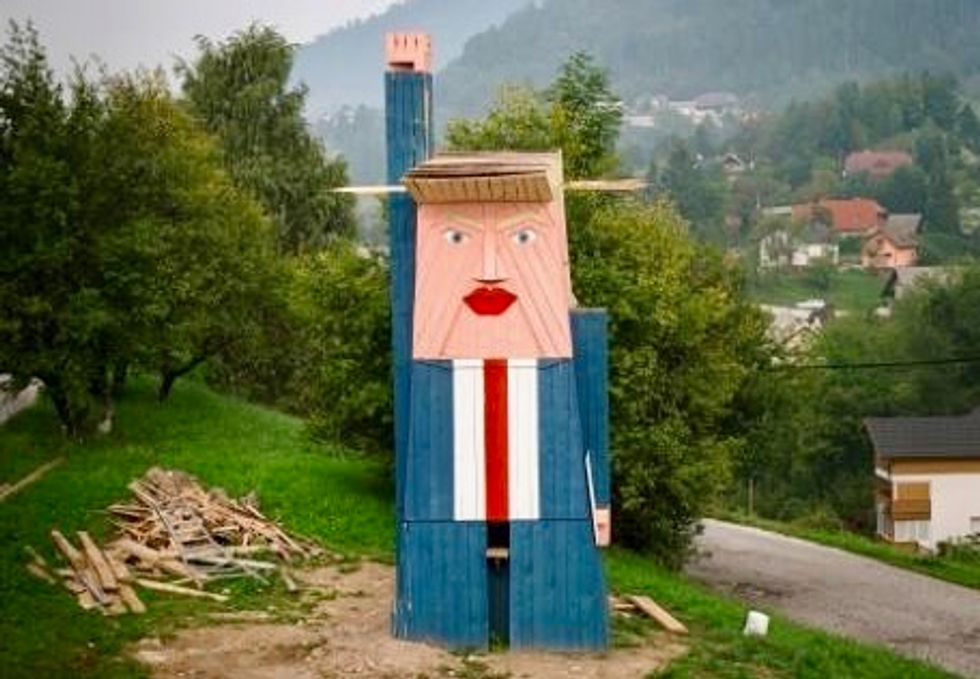 Amid the idyllic calm of a sleepy corner of northern Slovenia, the unlikeliest of disturbances intrudes -- an irate villager on a tractor ploughing into a huge effigy of US President Donald Trump.

The scene, witnessed by AFP, unfolded this week in the village of Sela pri Kamniku, around 30 kilometers (20 miles) north of the capital Ljubljana in the homeland of Trump's wife Melania.

The man was making his feelings clear on the place's newest feature -- an eight-meter-high (26 feet) statue of Trump complete with his trademark mane, blue suit, white shirt and red tie.

The statue emerged unscathed from the attack, despite threats from the incensed villager to burn it down.

Ahead of the official inauguration on Saturday, the artwork is sparking strong emotions in Sela pri Kamniku.

Its creator, architect Tomaz Schlegl, told AFP he wanted the piece to serve as a comment on populist politics.

A mechanism installed in the head allows the facial expression to change from "very friendly during the week to really scary over the weekends", symbolizing the hypocrisy of populist politicians, according to Schlegl.

The right arm is raised to the sky, in a pose reminiscent of New York's Statue of Liberty - or an iron-fisted salute, perhaps.

"We want to open people's eyes about what democracy is," he said while he and volunteers put the finishing touches to the figure.

However, Schlegl admits the message has been lost on some locals.

"Our more traditional neighbors, country folk, claim it's ugly and say it does not fit in this beautiful landscape," Schlegl said.

Comments on online news sites have scarcely been more forgiving than the villager on the tractor.

"What a waste of wood," reads one, while another simply asks: "Which idiot built this?"

Another critic laments that "the fact that Trump is a Slovenian son-in-law is no reason to build him a statue. Trump has only caused damage to the world and to the US."

Nevertheless Schlegl insists that some villagers have backed the statue and even volunteered time over the past few weeks to build it.

Sela pri Kamniku's statue is one of a fast-growing canon of Trump sculptures in the Alpine republic.

Schlegl came upon the idea of building the sculpture as a reaction to a similar monument to Melania Trump inaugurated in May near her hometown of Sevnica.

That too sparked mixed reactions.

While some saw the life-size statue as an effective parody, others said it looked like a scarecrow and should be removed.

Slovenes can now put their thoughts on Trump to newly appointed US ambassador Lynda C. Blanchard -- a donor to Trump's campaign -- who presented her credentials to Slovenian President Borut Pahor on Thursday.

Slovenian media have suggested that the appointment of a Trump supporter could be a sign Washington wants to boost relations with Ljubljana after a year of the post lying vacant.

Whether the route to closer ties will run through Sela pri Kamniku and its new artwork remains to be seen but in any case Blanchard will have to hurry if she wants to catch it.

Under pressure from other villagers, the owner of the land which the statue stands on has only given it permission to stay for two months and it is due to burnt on October 31, Halloween.