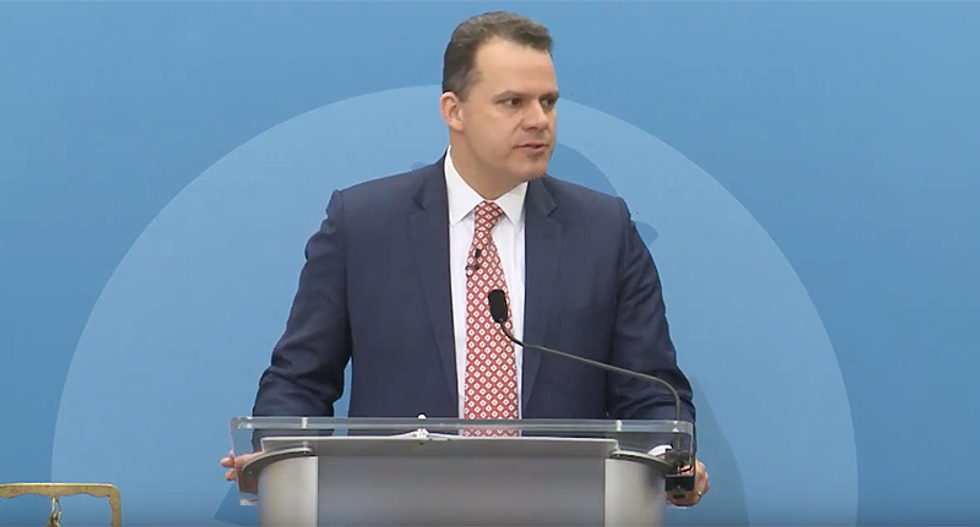 Justin Herdman, the US attorney for the Northern District of Ohio (Photo: Screen capture)

A federal prosecutor in Ohio used a recent press conference to not only announce criminal charges against an accused criminal but to take down white supremacists and Nazis, CNN reported.

In a Thursday press conference, Justin Herdman, the US attorney for the Northern District of Ohio, outlined the charges against white nationalist James Reardon, who threatened a Jewish community centre. Reardon already faces state charges after a mass shooting was thwarted by police.

Reardon's social media accounts were littered with anti-Semitic slurs and videos showing someone shooting a rifle with sirens and screams playing over it.

Herdman, said that he wanted to release a statement to Reardon and those like him, who believe that they can get away with domestic terrorism.

"Go ahead and make your case for Nazism, a white nation, and racial superiority," he told the press. "The Constitution may give you a voice, but it doesn't guarantee you a receptive audience. Your right to free speech does not automatically mean that people will agree with you. In fact, you have a God-given and inalienable right to be on the losing end of this argument.

"What you don't have, though, is the right to take out your frustration at failure in the political arena by resorting to violence," he continued. "You don't have any right to threaten the lives and well-being of our neighbors. They have an absolute and God-given and inalienable right to live peacefully, to worship as they please, to be free from fear that they might become a target simply because of the color of their skin, the country of their birth, or the form of their prayer."

He went on to say that threatening to kill Jews or Latinos while shopping for school supplies, "don't make you soldiers, they make you cowards." He said that police and other law enforcement officials don't go to war with such people, they simply arrest them.