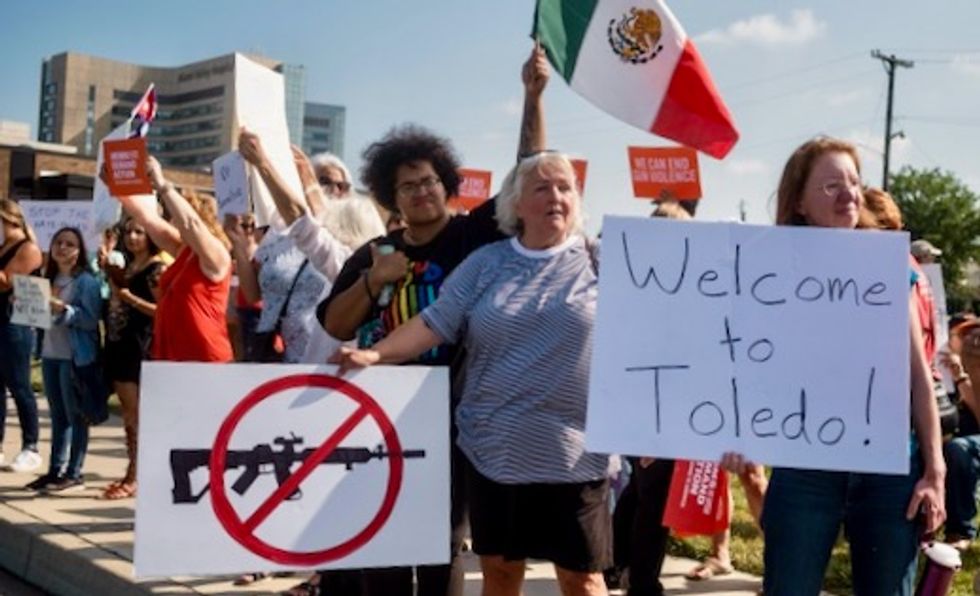 Demonstrators protest the visit of US President Donald Trump to the site of the mass shooting in Dayton, Ohio AFP / Megan JELINGER

President Donald Trump consoled victims of a mass shooting in Ohio on Wednesday but protesters and opponents denounced what they say is his extremist rhetoric on race and immigration.

The president's trip to Dayton, where nine people were gunned down over the weekend, was to be followed immediately after by a stop in the border city of El Paso, Texas, where 22 were murdered.

In Dayton, Trump and his wife Melania spent most of their time meeting patients and staff at Miami Valley Hospital, White House spokeswoman Stephanie Grisham said.

Trump told shooting survivors, "you had God watching. I want you to know we're with you all the way," according to Grisham.

But Trump's job of consoler in chief is complicated by charges that his own messaging -- in particular his vilification of illegal immigrants -- has emboldened political extremists.

Protesters gathered, holding signs that called for restrictions on gun buying and in one case simply demanding that politicians "Do something!" A Trump baby blimp, an inflatable effigy of the president in nappies, made an appearance.

There were, however, other protesters expressing support for the Republican president, illustrating just how divided the country is ahead of next year's elections.

Trump's next stop in El Paso was likely to be even edgier.

There, a gunman who echoed Trump's repeated use of the word "invasion" to describe illegal immigration, conducted his massacre at a Walmart store frequented by many Hispanic people.

Local Democratic congresswoman Veronica Escobar said she would not meet the president.

"From my perspective, he is not welcome here. He should not come here," Escobar said Tuesday on MSNBC.

Even the city's Republican mayor offered only a grudging welcome, stressing icily that he would greet Trump in his "official capacity."

AFP / MANDEL NGAN US President Donald Trump said before leaving for Dayton, Ohio that his rhetoric on race and immigration is not to blame for violent extremism

Trump pushed back before leaving the White House earlier Wednesday.

"I think my rhetoric brings people together," he said.

"My critics are political people, they're trying to make points. In many cases they're running for president," the Republican told reporters.

One of those critics, Democratic frontrunner Joe Biden, was to pile on the pressure later Wednesday with a speech accusing Trump of fanning "the flames of white supremacy."

"Trump offers no moral leadership, no interest in unifying the nation," the text of Biden's speech said. "We have a president with a toxic tongue who has publicly and unapologetically embraced a political strategy of hate, racism, and division."

Trump is infuriated by accusations that his administration is deliberately dividing the United States on racial lines.

"I am the least racist person. Black, Hispanic and Asian Unemployment is the lowest (BEST) in the history of the United States!" he tweeted Tuesday.

But his campaign speeches and tweets repeatedly link Hispanic migrants to murder, rape and invasion. As recently as May, the president laughed and made a quip when a supporter at one of his rallies yelled that they should "shoot" illegal immigrants.

Trump has also railed crudely against a string of ethnic minority Democratic opponents.

Where Trump and his mostly leftist opponents agree is on the unambiguous designation of the two events as terrorism.

Massacres by mostly lone gunmen are all but routine in the United States, where guns are easy to obtain legally and mass killings have taken on a sort of cult status in extreme circles.

Hardline defenders of gun ownership have long resisted portrayal of such tragedies as anything more than random, localized events.

But Trump on Monday said he had told the FBI to treat such crimes as "domestic terrorism."

On Wednesday, Trump also said that Republicans and Democrats were "close" to agreeing on stronger background checks for people purchasing firearms -- a measure opposed by gun rights lobbies.

"I think background checks are important. I don't want to put guns into the hands of mentally unstable people or people with rage or hate," Trump said.

However, he said "there is no political appetite" for banning military style assault weapons, which are widely available and are often chosen by mass killers.