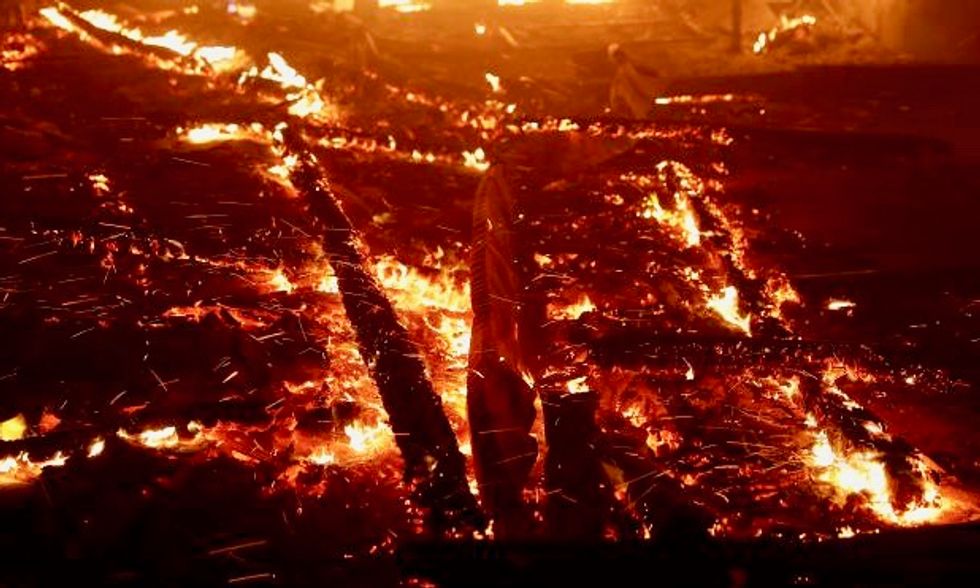 Millions of acres are burning in the Arctic, thousands of fires blaze in the Amazon, and with seemingly endless flareups in between, from California to Gran Canaria – fire seems everywhere, and everywhere dangerous and destabilizing. With a worsening climate, the fires dappling Earth from the tropics to the tundra appear as the pilot flames of an advancing apocalypse.  To some commentators, so dire, so unprecedented are the forecast changes that they argue we have no language or narrative to express them.

Actually, the fire scene is worse than the headlines and breathless commentaries suggest because it is not just about bad burns that crash into towns and trash countrysides.  It’s equally about the good fires that have vanished because they are suppressed or no longer lit.  More of the world suffers from a famine of good fires than from a surfeit of bad ones; the bad ones are filling a void; they are not so much wild as feral.

Underwriting both is that immense inflection in which humans turned from burning living landscapes to burning lithic ones in the form of fossil fuels.  That is the Big Burn of today, acting as a performance enhancer on all aspects of fire’s global presence.  So vast is the magnitude of these changes that we might rightly speak of a coming Fire Age equivalent in stature to the Ice Ages of the Pleistocene.  Call it the Pyrocene.

So there does exist a narrative, one of the oldest known to humanity, and one that has defined our distinctive ecological agency. It’s the story of fire.  Earth is a uniquely fire planet – it has been since life clambered onto the continents.  Equally, humans are a uniquely fire creature, not only the keystone species for fire but a species monopolist over its manipulation.  The fires in the Arctic testify to the planetary antiquity of fire.  Nearly all are kindled by lightning and burn biotas nicely adapted to fire; many could be suppressed, but extinguishing them will only put off, not put out, the flames. By contrast, the fires in the Amazon bear witness to a Faustian pact that hominins made with fire so long ago it is coded into our genome.  They are set by people in circumstances that people made, well outside ecological barriers and historical buffers.

This is a narrative so ancient it is prelapsarian. Our alliance with fire has become a veritable symbiosis.  We got small guts and big heads because we learned to cook food.  We went to the top of the food chain because we learned to cook landscapes.  Now we have become a geological force because we have begun to cook the planet.  We have taken fire to places and times it could never have reached on its own, and it has taken us everywhere, even off world. We have leveraged fire; fire has leveraged us.

How this happened is a largely hidden history – hidden in plain sight.  Fire disappeared as an integral subject about the time we hid fire into Franklin stoves and steam engines.  (The only fire department at a university is the one that sends emergency vehicles when an alarm sounds.)  It lost standing as a topic in its own right.  As with the fires of today, its use in history has been to illustrate other themes, not to track a narrative of its own.

Yet how the present scene came to be is clear enough in its general contours.  How, outfitted with firesticks early humans could take over select biotas.  How, with axes and plows and livestock as fire fulcrums, societies could recode the patches and pulses of vast swathes of land for agriculture.  How, hungering for ever more firepower, we turned from burning living landscapes to burning lithic ones – once-living biomass converted over eons into oil, gas, lignite, and coal.  Our firepower became unbounded.

That is literally true.  The old quest for sources has morphed into one for sinks.  The search for more stuff to burn has become a problem of where to put all the effluent.  Industrial combustion can burn without any of the old ecological checks-and-balances: it can burn day and night, winter and summer, through drought and deluge.  We are taking stuff out of the geologic past and unleashing it into the geologic future.

It’s not only about changing climate, or acidifying oceans. It’s about how we live on the land. Land use is the other half of the modern dialectic of fire on Earth, and when a people shift to fossil-fuels, they alter the way they inhabit landscapes.  They rely on industrial pyrotechnologies to organize agriculture, transportation, urban patterns, even nature reserves, all of which tend to aggravate the hazards from bad fire and complicate the reintroduction of good fire. The many conflagrations sparked by powerlines nicely capture the pyric collision between living and lithic landscapes. Still, even if fossil-fuel combustion were tamed, we would yet have to work through our deranged relationship to fires on living landscapes.

Because fire is a reaction, not a substance, the scale of our fire-induced transformations can be difficult to see.  But we are fashioning the fire-informed equivalents of ice sheets, mountain glaciers, pluvial lakes, outwash plains, and of course changing sea levels, not to mention sparking wholesale extinctions.  Too much bad fire, too little good, too much combustion overall - it’s an ice age for fire.  The Pyrocene is moving from metaphor to descriptor.

It’s all there: narrative, analogue, explication.  A couple of centuries ago we began hiding our fires in machines and off site, which can make it difficult for modern urbanites to appreciate how profoundly anthropogenic fire practices inform Earth today.  We use the rampaging flames to animate other agendas, not to understand what fire is telling us.  But fire, the great shape-shifter, is fast morphing beyond our grasp.

What does a full-blown fire age look like?  We’re about to find out.

Steve Pyne, emeritus professor at Arizona State University, is the author of the recently updated and revised Fire: A Brief History (University of Washington Press).