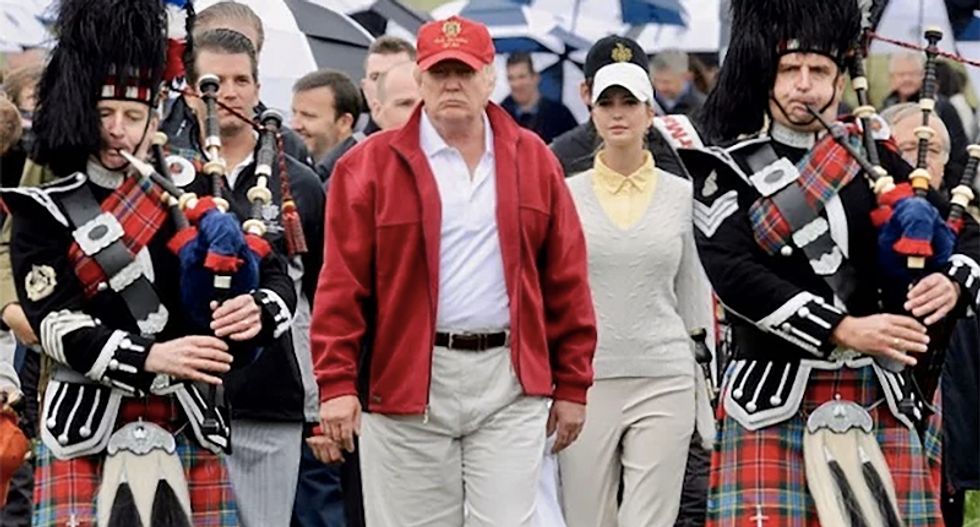 The Air Force has not only been staying at Trump's resorts for three years, but they were also likely the largest customer of Trump's Scottish golf club.

Washington Post reporters David Fahrenthold and Jonathan O'Connell outed President Donald Trump for working his official relationship with the Saudi royal family so they'd stay at his hotels. Politico reporter Natasha Bertrand uncovered the fact that the U.S. Air Force was being used to funnel cash to the president's companies.

Trump's Turnberry resort was losing money until he was able to reroute Air Force planes to land in Scotland to refuel instead of a military base. While that might cost American taxpayers significantly more money, it was good business for the president. Now the resort is doing extremely well.

"A lot of them are actually staying for multiple nights while their planes get serviced, which of course is more difficult at the airport because it’s not a military base so you’re having to bring in technicians to deal with these planes meanwhile you have the Air Force crews lodging at Turnberry for multiple nights, playing golf there, going to the bar," Bertrand told host Chris Hayes on MSNBC. "All of that money, particularly because the president never fully divests from his businesses, and I think that’s a really important point to remember, could be flowing back into the president’s pocket and it’s certainly helping keep the resort afloat because the U.S. Air Force actually acknowledged to us that they wouldn’t be surprised at all, and it would make complete sense, if they were Trump Turnberry's largest customer at this point."

"They told you that?" Hayes questioned.

"Yes, on background they acknowledged to us, it would be logical for people to assume they would be the largest customer for the resort," Bertrand said.

"We don’t know if that’s solely because of the U.S. military spending money there because of course once the president became president, more people of course would flock to his results, especially foreign money as we saw with our reporting this morning and Saudi lobbyists and Saudis themselves have spent thousands of dollars since he was elected," she said. "So, whether not it’s actually just the U.S. military we don’t know and it’s probably pretty unlikely, but the fact they are perhaps the single biggest customer recently as they’ve told us is pretty jarring.

At least 40 U.S. Air Force trips have brought in profits from Trump from the government. Trump never divested from his investments, including Turnberry.