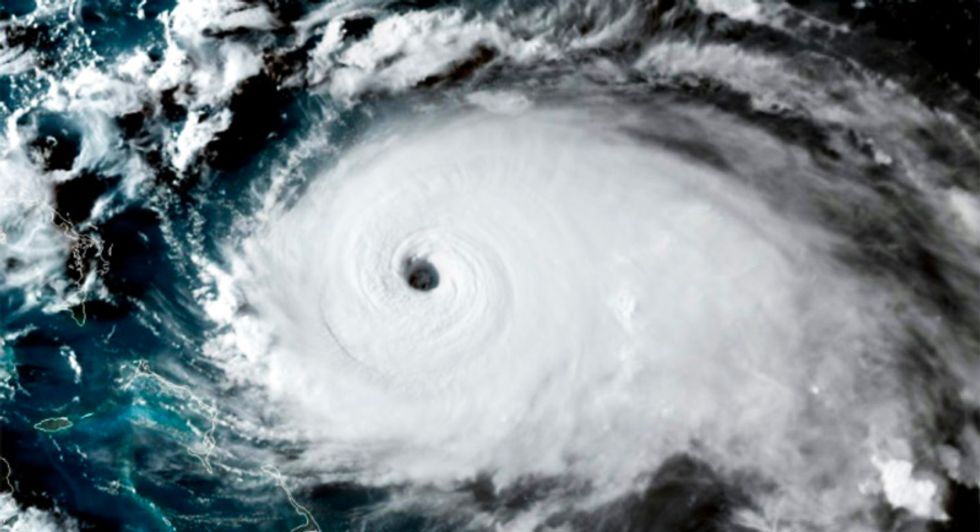 NOAA/RAMMB/AFP / HO This satellite image obtained from NOAA/RAMMB, shows Dorian as it approaches the Bahamas and Florida at 22:20 GMT on August 31

Hurricane Dorian roared Sunday towards the Bahamas as the island chain braced for a devastating direct hit, before the monster storm churns up the US coast from Florida towards the Carolinas.

Barreling in from the Atlantic Ocean, the core of the extremely dangerous Category 4 storm is set to be "near or over" parts of the northwestern Bahamas on Sunday, the US National Hurricane Center (NHC) said in its latest bulletin at 0500 GMT.

Further ahead the NHC said Dorian would "move closer to the Florida east coast late Monday through Tuesday" but exactly where -- and how hard -- it will strike the US coast looked uncertain after the storm shifted course.

However a tropical storm warning was in effect for parts of Florida's coast, according to the NHC's latest bulletin.

In Grand Bahama, businesses were boarded up and thousands have evacuated Dorian's predicted path with forecasts of devastating winds, life-threatening surf conditions, and storm surges of up to 15 to 20 feet (4.5 to 6 meters).

Yasmin Rigby, a resident of the island's main city Freeport, told AFP "people are moving out of the east and west ends, fearing the worst."

Grocery stores' shelves were "just about cleared," Rigby said, and most homes and businesses had been shuttered since Friday.

She said memories of past hurricanes -- including 2005's historic storm Wilma -- were still fresh. "It took weeks for water, food and electricity to be back to normal."

The storm's leisurely pace of eight miles per hour (13 kph) means as much as 25 inches of rain could land in the northwestern Bahamas.

That, coupled with the storm surge predictions, poses a fearful prospect for many of the islands, some barely feet above sea level.

Still, Rigby was among the Grand Bahamians who said they intend to ride the storm out.

"Where I am, it's not that bad. I will be filling tubs of drinking water tonight to wait it out," she said.

Currently located about 125 miles east of the Bahamas' Great Abaco Island, Dorian will keep moving slowly westward for the next day or two but is forecast to turn northward.

But the NHC has not ruled out the storm making landfall in Florida.

"Uncertainty remains high as any small shifts in the track could substantially change the potential impacts for locations along the Southeast US coast," the National Weather Center Eastern Region wrote on Twitter.

Dorian's current strength, with maximum sustained winds of 150 miles per hour (240 kph) and even more powerful gusts, makes it nearly a Category 5 hurricane -- the highest and most damaging level.

In the Bahamas, government offices were closed and people rushed to prepare for a storm they were told could prove catastrophic.

"The price you may pay for not evacuating is your life or other serious physical harm," Prime Minister Hubert Minnis warned residents.

Donald Trump, who canceled a high-profile trip to Warsaw to focus on storm preparations, was "being briefed every hour," his spokeswoman Stephanie Grisham told reporters who accompanied the president to his Virginia golf course Saturday.

Trump, whose properties include Florida's Mar-a-Lago resort, tweeted that Dorian's path was "very hard to predict, except that it is one of the biggest and strongest (and really wide) that we have seen in decades. Be safe!"

Given the storm's uncertain path, coastal Florida residents were not yet under evacuation orders but were stocking up on supplies and weighing whether to flee their homes.

While Miami appeared likely to be largely spared, 30-year-old David Duque, picking up sandbags there on Saturday, noted "everything could change... I know it could be a scare, but better prepare instead of doing nothing."

The Florida National Guard said roughly 2,000 service members had been mobilized, with another 2,000 poised to join them.

Trump has declared a federal state of emergency in Florida, authorizing US assistance to supplement state and local efforts.

Following a similar state order in Florida, South Carolina Governor Henry McMaster declared a state of emergency Saturday, saying, "Given the strength and unpredictability of the storm, we must prepare for every possible scenario."

Florida's NASA Kennedy Space Centre said it was moving an enormous mobile rocket launcher inside to protect it.