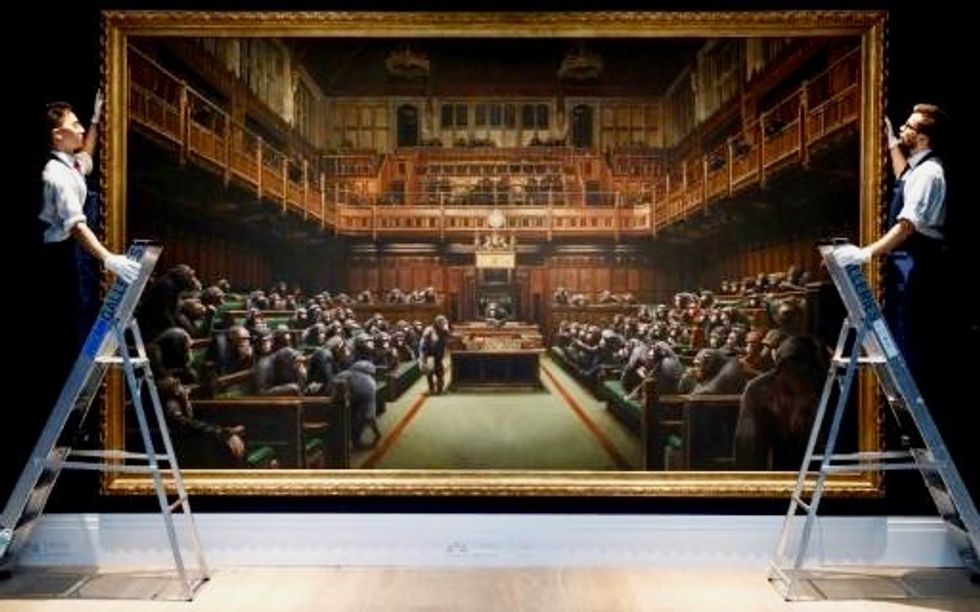 A painting by British street artist Banksy depicting parliament populated by chimpanzees is to go on show on Saturday before going under auction.

"Devolved Parliament", painted in 2009, is due to go on display until October 3, when it will go under the hammer at Sotheby's auction house.

The sale comes after the controversial five-week suspension of Britain's parliament by Prime Minister Boris Johnson was deemed unlawful by the Supreme Court, with time running out before Britain is due to leave the European Union on October 31.

Parliament was due to return on October 14 but instead reconvened on Wednesday, since when MPs have spent their time angrily arguing over the suspension, and then arguing about whether their language in doing so was too strong.

House of Commons Speaker John Bercow said they were the most toxic scenes he had ever seen in his 22 years in the elected lower chamber.

"Inevitably what we have been seeing in the Houses of Parliament over the last few months and weeks has become a daily soap opera, not just in the UK... but also across the rest of Europe and indeed the world.

The painting measures 4.46 metres by 2.67 metres -- the largest known canvas by the anonymous street artist.

It shows chimpanzees on the green benches of the Commons, from the viewpoint of the main entrance.

"What he's pointing to here is the regression of the oldest parliamentary democracy in the world into tribalistic animalistic behaviour, the sort that we've seen broadcasted on our televisions," said Branczik.

Banksy got the painting out again for March 29 this year, when Britain was originally due to leave the European Union.

"I made this 10 years ago. Bristol Museum have just put it back on display to mark Brexit day," the mysterious artist said at the time.

"Laugh now, but one day no-one will be in charge."