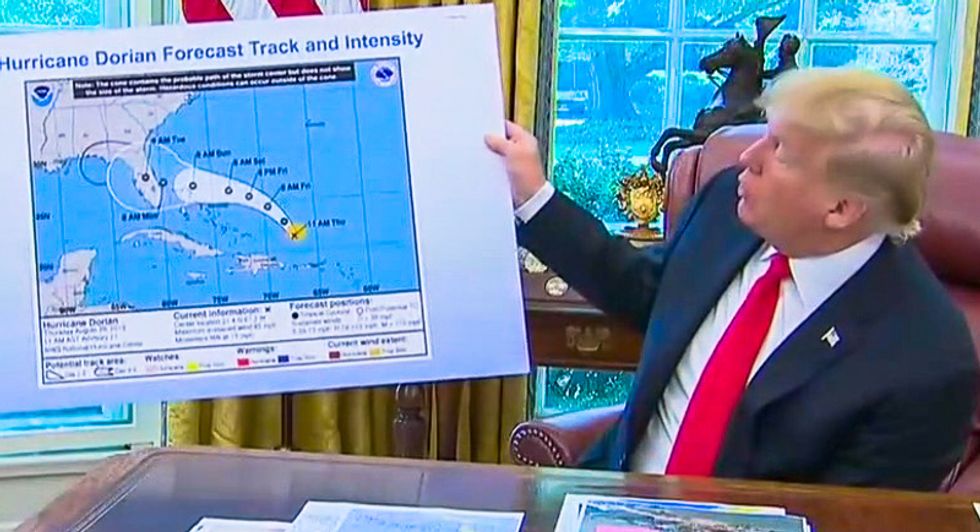 CNN's Brianna Keilar on Thursday tore into President Donald Trump for fixating on justifying his false claims about Hurricane Dorian hitting Alabama at a time when the actual hurricane is costing people their homes and their lives.

During her show, Keilar reviewed the president's decision to quintuple down on his false claims on Sunday that Alabama was in real danger from the hurricane even though the storm has now moved on and is hammering the east coast.

Keilar took particular offense to Trump's now-infamous doctored weather map in which someone at the White House used a sharpie to expand the radius of Dorian's impact so it could include Alabama.

"Bottom line: The White House is falsifying weather reports so that it doesn't have to admit the president, who spent the weekend golfing, was not up to date on the storm's forecast," she said.

As Keilar spoke, an absolutely brutal chyron appeared at the bottom of the screen that read, "As people die, Trump defends presenting doctored map."

Keilar then brought on former FEMA administrator Craig Fugate, who discussed the importance of public officials passing on accurate information to the public during natural disasters such as Hurricane Dorian.