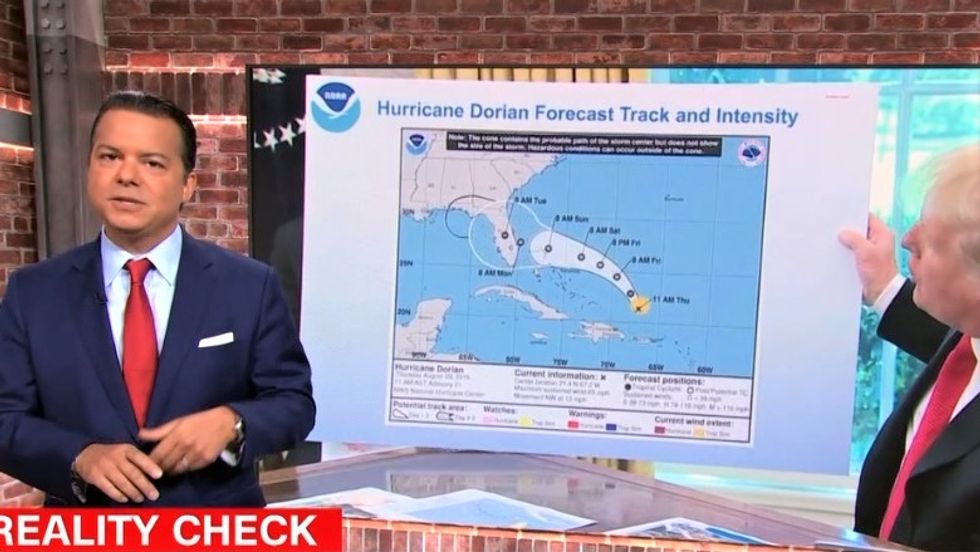 CNN's John Avlon on Thursday dropped the hammer on President Donald Trump for his shameless attempts to doctor weather reports and bully scientists just so he could avoid admitting error.

After recapping the latest reports about the president sending his "apparatchiks" to strong arm the National Oceanic and Atmospheric Administration (NOAA) into contradicting its own meteorologists about the path of Hurricane Dorian, Avlon explained why Trump is setting a horrible precedent for future administrations.

"This is called normalization, and it's not just creepy and cowardly -- it's a dereliction of duty," Avlon said. "It's far from the only example of the suck-uppery we've seen in recent days."

He then showed a video of Rep. Kevin McCarthy (R-CA) explaining why he wasn't concerned with government officials enriching the president by spending taxpayer dollars at his hotels and resorts.

"It's important to remember, folks, that none of this is normal," he said. "Threatening to fire experts for telling the truth instead of backing up the president? Not normal. Defending government officials for putting money in the president's pockets? Not normal."

Avlon concluded his segment by issuing a dire warning about the future of the American republic.

"When politicians line the president's pockets and shrug like there's nothing to see here, when career meteorologists can almost lose their jobs for putting accuracy over a president's ego, when our politics extend not only from sea to shining sea, but into the storm clouds themselves, something has gone very wrong in our democracy."