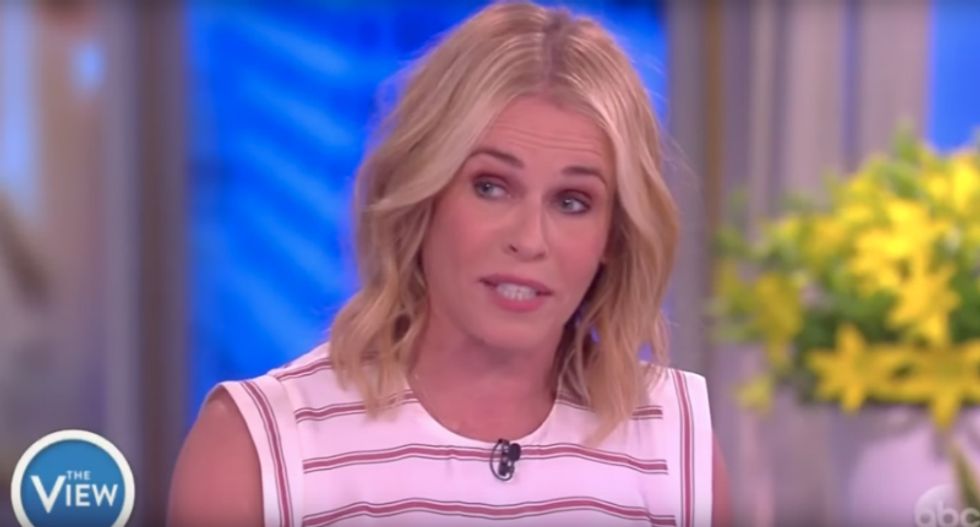 Chelsea Handler, star of the Chelsea show on Netflix, discussed that state of the president's marriage with the hosts of The View.

On Wednesday's edition of ABC's "The View," comedian Chelsea Handler discussed the perspective she gained on white privilege from talking to people of color — and the lessons white people should learn.

While shooting her upcoming Netflix documentary, "Hello Privilege, It's Me, Chelsea," Handler went to the University of Southern California and talked to African-American students. According to her, the whole situation made her uncomfortable — but that discomfort isn't anything to be afraid of.

"There were black people in that room that were taking me to task saying, 'All you do is come in here and take, take, take,'" said Handler. "You making a documentary about white privilege is an example of your privilege, and I' — yes, that's correct, and it was good for me to hear."

The lesson, Handler said, is that white people need to resist the impulse to react negatively when people of color discuss their privilege. "Guess what! It's OK to be uncomfortable! We can afford to be a little uncomfortable after everything that's happened and stretch our, kind of, brains and our bodies to — to put ourselves in situations that aren't natural, that aren't comfortable."

She added that it might also help if more white people took racial sensitivity classes proactively.

Handler's comments were mocked by some corners of conservative media, like The Blaze. But in reality, she is speaking to a very important phenomenon: some sociologists have noted a backfire effect, known as "white fragility" whereby people confronted with examples of their privilege deny, explain it away, or double down on it. And white liberals are often just as guilty as white conservatives.

Everyone wants to think they are one of the "good ones," and if people aren't used to being confronted with the forms their own privilege takes, they will be less able or willing to address it.