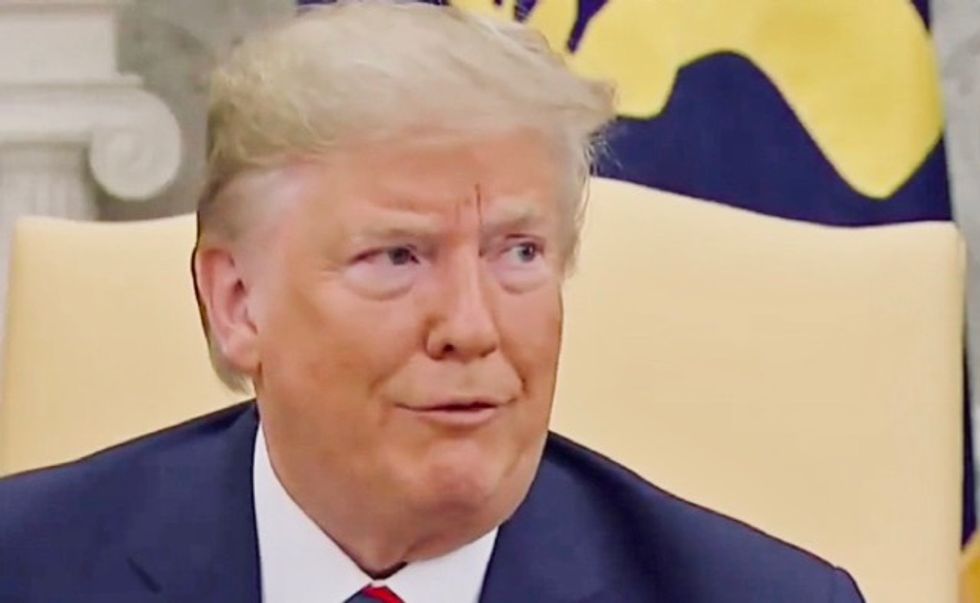 On Friday, President Donald Trump once again tried to undermine the intel whistleblower who alleged in an official complaint that the president had tried to trade military aid for information about Joe Biden.

"Sounding more and more like the so-called Whistleblower isn’t a Whistleblower at all," Trump wrote on Twitter. "In addition, all second hand information that proved to be so inaccurate that there may not have even been somebody else, a leaker or spy, feeding it to him or her? A partisan operative?"

But the scandal, which prompted the Democrats to launch an impeachment investigation, is not going away.

First, the Republican leadership has not been especially vociferous in defending the president. "The assumption that there could never be a vote to remove him or that it would never get Republican votes needs to be rethought," Rubin writes.

Then there are the polls. "An NPR/PBS NewsHour/Marist Poll shows a plurality (49 to 46 percent) favors impeachment, a large bump from April, when 39 percent favored and 53 percent did not. Likewise, the Morning Consult polls shows 43 percent favor and 43 percent oppose impeachment, including a small plurality of independents."

A third bad sign for the president is that the long roster of people who are implicated gives the scandal a Watergate feel. Plus, the fact that Trump's comments about executing the whistleblower were leaked so swiftly likely means many people close to him would be willing to rat him out.

In addition, the Democrats charged with the investigation are very good at their jobs. "House Speaker Nancy Pelosi (D-CA) has given the laboring oar to the Intelligence Committee headed by the very able Chairman Adam B. Schiff (D-CA) and on which two of the sharpest Democrats sit — Reps. Jackie Speier (D-CA) and Eric Swalwell (D-CA)," Rubin writes.

Plus, this particular controversy is easy to understand, so it's wise for Pelosi to hone in on it.

Finally, Donald Trump continues to be his own worst enemy.

"Surely he must see the walls closing in and the potential for removal, prosecution and, worst of all for a first-class narcissist, humiliation," Rubin writes.

"He was so thickheaded he didn’t even realize what was incriminating. He was so foolish as to take advice from the equally unhinged Giuliani. There is little doubt he will be regarded as one of the worst if not the worst president in history."