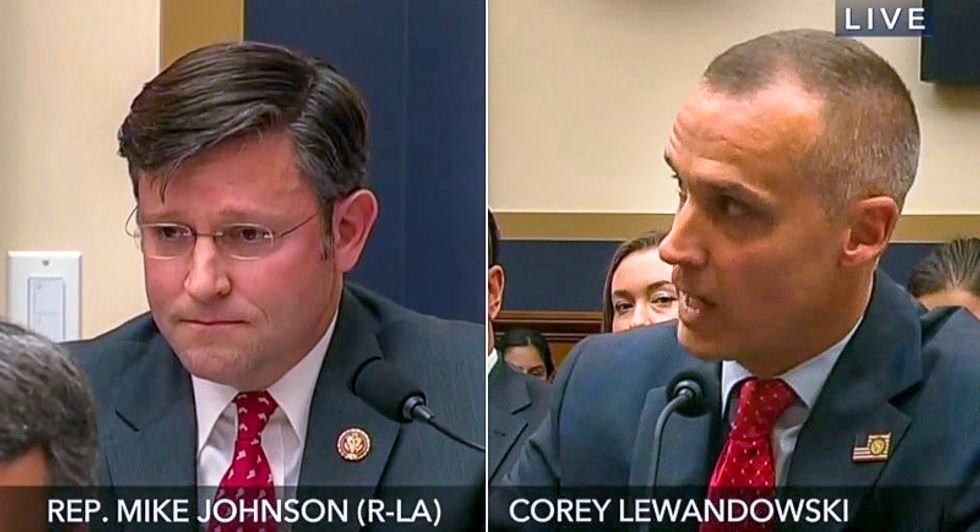 Former Trump campaign aide Corey Lewandowski said on Tuesday that the investigation into Russia's attack on the U.S. election system may be the "greatest crime" waged on the American people ever.

While appearing before the House Judiciary Committee, Republican Rep. Mike Johnson of Louisiana teed up a question for the president's adviser.

"You called it a witch hunt I wonder if you’d like to elaborate on that any further?" Johnson asked.

"I think that this fake Russia collusion narrative is the greatest crime committed against the American people in our generation if not ever," Lewandowski opined. "This is a president who was duly elected by the American people and members of certain bodies refuse to accept the election results."

"But when you support Hillary Clinton and Barack Obama its a different set of rules," he continued. "There's been no accountability for the FISA abuse that occurred, the spying on Americans in violation of the Fourth Amendment or the lives ruined because they wanted to support a candidate for president of the United States and it’s shameful."

Rep. Val Demmings (D-FL) quickly pointed out that Americans had faced many "crimes" worse than the Russia investigation.