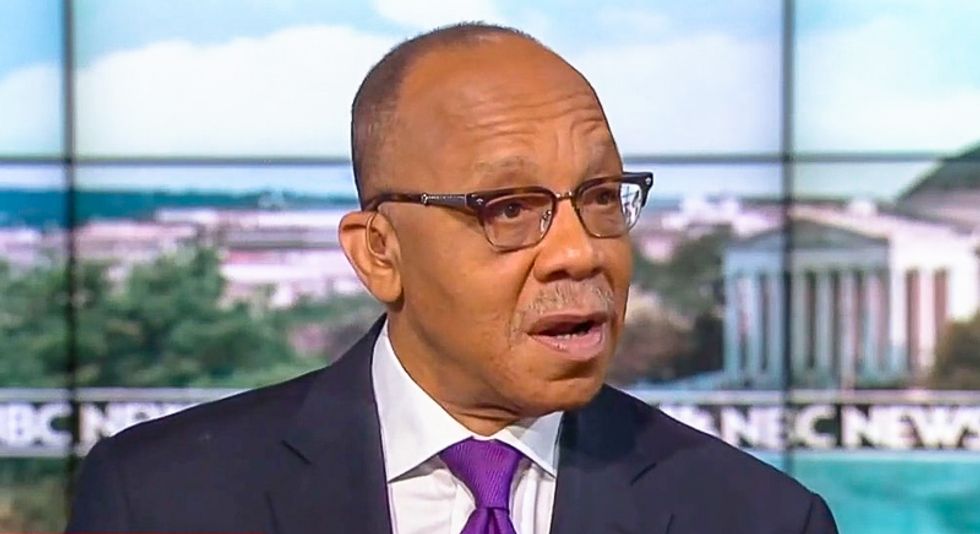 Democrats have spent months fighting over the tiniest details of each policy during the handful of Democratic debates and forums. While they may agree on 98 percent of the policies, it's the two percent that campaigns are zeroing-in on. The reality, however, is that few if any of the policies or campaign promises will ever come to fruition. As Washington Post columnist Eugene Robinson explained in his latest column, the greatest challenge of any Democratic leader post-Trump will be fixing the things the president broke.

In his Monday column, Robinson demanded to know not just how Democrats plan to actually beat Trump, but how they'll repair the damage he'll leave. He doesn't doubt Democrats can accomplish the goal of kicking the president out of the White House, but the aftermath is another matter.

"Perhaps the most straightforward and least complicated undertaking, since it would be entirely within the next president’s purview, is rebuilding the executive branch from the corrupted ruin Trump will leave behind," wrote Robinson. "One of the most underreported stories about the Trump administration is its basic incompetence. Perhaps Trump’s biggest con of all was convincing his supporters that he was some sort of business wizard with a genius for management. In truth, the Trump Organization was a mom-and-pop family business that he repeatedly micromanaged to the brink of collapse. He is doing exactly the same with the government of the United States."

He explained that the White House isn't like the fictional series "The West Wing" so much as it's like "Game of Thrones." A new president will be forced to repair that on both the national and international stages.

"So, the first job of the next president will be to restock the executive branch with the kind of competent, dedicated professionals who have served both Democratic and Republican administrations in the past," he wrote. "This will be a big endeavor, but it’s relatively straightforward."

The more complicated task will be figuring out how to fix the legislative branch that Trump and Senate Majority Leader Mitch McConnell (R-KY) have neutered.

"Even if voters hand control of the Senate to Democrats, McConnell would still be able to use the Senate’s rules to delay, deflect and disrupt," Robinson wrote. "In that eventuality, would the next president push Senate leaders to get rid of the filibuster? And if the Republicans retain Senate control, which is a very real possibility, do the Democratic candidates have ideas for going over, under, around or through McConnell to make Congress a functioning legislature once again?"

The hardest task will be fixing the judicial branch. Already Democrats are talking about the impeachment of Justice Brett Kavanaugh after it was discovered the FBI never investigated accusations of sexual misconduct. But after McConnell blocked hundreds of judicial appointments under Obama, he's handed them over to Trump. The far-right ideologues will change jurisprudence for a generation if they're allowed to serve without accountability.

Robinson closed with a quote from Benjamin Franklin, who famously said the Constitutional Convention produced “a republic, if you can keep it.” Robinson said that the banana republic Trump leaves Americans with will need a lot of fixing from his successor.