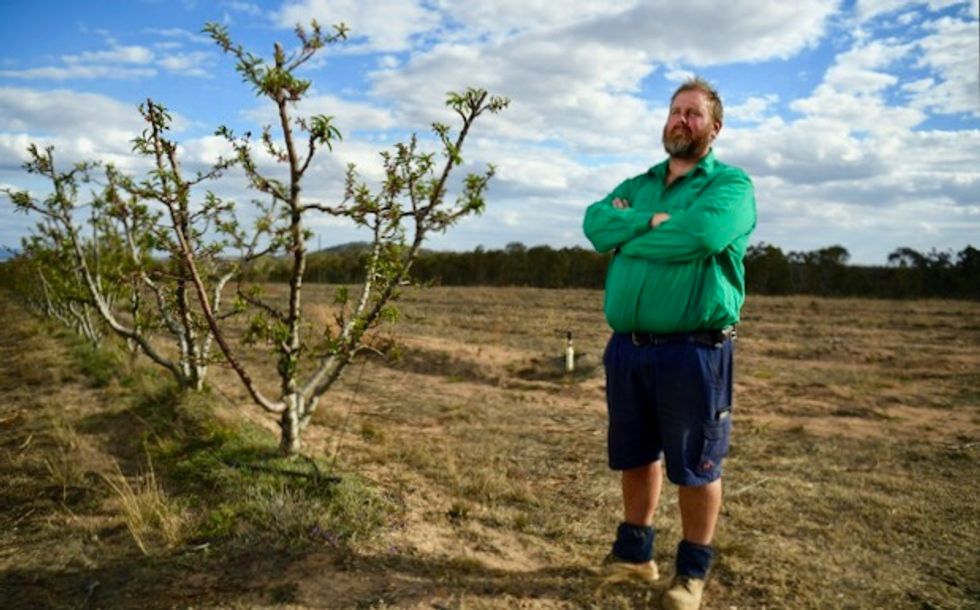 An unprecedented water shortage in drought-stricken eastern Australia is driving home the brutal realities of climate change and threatening the much-mythologised Outback way of life.

From sunny Queensland all the way to Sydney, more than a dozen small towns are facing their own "Day Zero" within months, a water crisis reminiscent of the taps being turned off in Cape Town and Chennai.

It's getting hotter, it's getting drier, and adding to the misery, precious water supplies are being tasked to fight hundreds of bushfires ripping through the Australian countryside.

In the small horticulture hub of Stanthorpe, Queensland, a prolonged crushing drought has left water supplies at the local dam sitting metres below normal levels.

Despite sitting within the basin of Australia's biggest river system -- as do all of the towns running dry -- Stanthorpe is set to run dry by Christmas.

Authorities will have no choice but to truck-in water at a monthly cost of Aus$1 million ($690,000) -- a temporary reprieve expected to remain sustainable for just 12 months.

In Angus Ferrier's orchard, citrus trees that once blossomed in orderly rows now lie in a twisted heap.

His farm's water own supply will be empty within weeks, so he has dug up thousands of trees and expects to sacrifice the same number again before the year is out.

"They were eight years old," he said, pulling a dried flower off a gnarled branch, "so eight years of your life, gone in a day."

The local growers' association believes drought will cost the region's economy Aus$100 million this season alone -- an enormous amount for a small community like Stanthorpe.

Farmers are taking radical measures just to survive, spending a small fortune to truck-in water for their crops or renting land in other districts that have been less badly affected.

"I do know of some growers who are literally bone dry and have decided to plant nothing this year and practically close their businesses down in the short-term," Ferrier said.

Their struggles have had a knock-on effect in town, where shops are on the brink of shutting, and desperation has led to several instances of water theft across the region.

To the south, the entire state of New South Wales was declared in drought last December. Some reservoirs are as low as one percent of capacity, and smaller towns such as Guyra have effectively already run dry.

Water is being trucked in until a fast-tracked Aus$13 million pipeline comes online at the end of September. But at current water usage rates, even the pipeline's supply will only last the wider 30,000-strong Armidale district another year.

"We are looking at alternative sources of water, not just that which comes from the sky by way of rain," Armidale Regional Council CEO Susan Law said.

"A hydrogeologist has identified nine sites around the Guyra region where we will be drilling to see if there's groundwater there to supplement our supply."

Australia -- dubbed the "Sunburnt Country" -- has long been buffeted by drought and floods.

AFP / William WEST Storm King dam near Stanthorpe in regional Queensland used to be a popular swimming spot, but there is hardly any water left now

But scientists say weather extremes are exacerbated by climate change, which Australians -- even some in these conservative bush areas -- increasingly acknowledge.

The government, anxious to support the country's huge coal mining and export sector, has rejected calls to make fighting climate change a priority on the grounds this would undermine economic growth.

Local authorities are scrambling to respond to the immediate crisis with measures such as pipelines and drilling, but there is growing pressure for a national policy response.

That could include dam-building and more stringent restrictions on using river water for irrigation.

"You get the feeling that everyone's on edge because you've got to watch everything you do -- you've got to be careful of every little drop you use," said Stanthorpe resident Tom Hehlen.

"That can be very stressful."

Guyra grazier Gordon Youman said the very fabric of Australia's Outback is at stake, with many farmers suffering mental health issues as they face the prospect of going broke.

"It's that core of the country -- where mum and dad and the kids work together -- they're the ones that are going to be pulled down," he said.