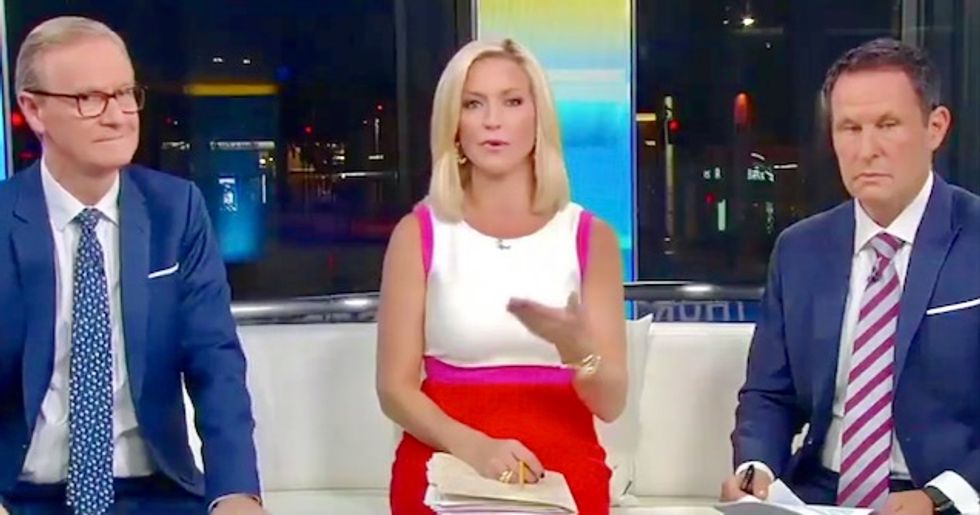 "Fox & Friends" co-host Ainsley Earhardt is defending President Donald Trump for lying for years about Mexico paying for his border wall by saying "he doesn't want to make them mad," and  suggesting that at least Americans aren't paying for it via tariffs. They are, however, paying for it directly, via taxes.

"A lot of people, especially Democrats, are saying, 'I thought you said Mexico is going to pay for the wall?'" Earhardt told Fox News viewers Thursday, ahead of airing an interview with the president.

"He said, 'I could easily slap a 5% tariff on their automobiles and other goods that are coming into the U.S.' He said, 'I don't want to do that right now, because Mexico is so helpful because they've brought out 27,000 soldiers on the border to try and prevent people from coming into our country."

What neither Earhardt nor the president understood – or, at least, admitted – is that "slapping a 5% tariff" on goods coming in from Mexico means Americans would be paying the increased costs, not Mexico.

Trump refuses to admit that it is Americans who ultimately are forced to pay the cost of his tariffs, not the country exporting the goods.

"So he doesn't want to make them mad by slapping tariffs because he said they've been so helpful, unlike Congress."

Again, Mexico is not paying for the wall, U.S. taxpayers are. And exactly zero miles of new border wall fencing has been constructed.