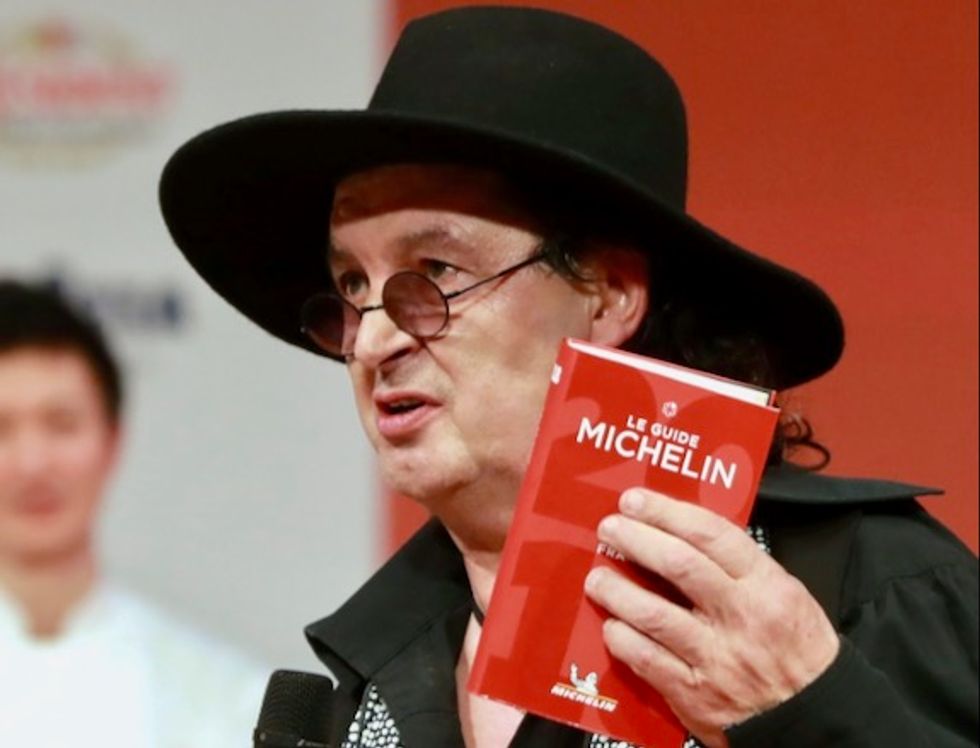 Celebrity French chef Marc Veyrat said Tuesday that he has sued the famed Michelin guide after inspectors stripped his restaurant of its coveted third star, claiming they had botched their evaluation, in particular over a cheese souffle.

"I've been dishonored, I saw my team in tears... to have them call you one evening without warning, without anything written down, without anything, to say 'That's it, it's over'," Veyrat told France Inter radio on Tuesday.

Veyrat's La Maison des Bois restaurant in the French Alps was demoted to two stars from the maximum three last January, just a year after he secured the industry's highest accolade.

He said the move plunged him into depression, and the furious chef later demanded that he be removed from the vaunted red guides -- in vain.

He claims the downgrade came after a Michelin inspector mistakenly thought he had adulterated a cheese souffle with English Cheddar, instead of using France's Reblochon, Beaufort and Tomme varieties.

"I put saffron in it, and the gentleman who came thought it was cheddar because it was yellow. That's what you call knowledge of a place? It's just crazy," Veyrat told France Inter.

His lawyer Emmanuel Ravanas had told AFP late Monday that Veyrat hopes the court will force Michelin to hand over documents "to clarify the exact reasons" justifying its decision.

He said a court hearing has been set for November 27 in Nanterre, just west of Paris.

"For decades, Marc Veyrat has been used to having his cooking graded, evaluated and compared, and he knows quite well that you don't own a star for life... He accepts it all, as long as the criticism is accurate," Ravanas said.

Veyrat, 69, made his name with his so-called "botanical" cooking, employing the wild herbs gathered around his restaurants in his native Haute Savoie region.

Earlier this year the chef, who is instantly recognizable in France for his signature wide-brimmed black Savoyard hat and smoke-tinted glasses, had tried to get Michelin to hand over the inspector notes or the bills proving they had indeed dined at his establishment.

He also claimed that a new generation of editors at the head of the guide were trying to make their names by attacking the pillars of French cuisine.

But in a statement Monday, Michelin said it "understands the disappointment for Mr Veyrat, whose talent no one contests, even if we regret his unreasonable persistence with his accusations."

"Our first duty is to tell consumers why we have changed our recommendation. We will carefully study his demands and respond calmly," it said.

Veyrat's recovery of a third star for La Maison du Bois in 2018 capped a comeback after he was forced to give up cooking a decade ago after a serious skiing accident.

He had previously won three stars for two other restaurants.

The intense strains of reaching cooking's highest spheres -- and the financial impacts of losing Michelin stars -- have been highlighted in recent years by the suicides of several top chefs.

French chef Bernard Loiseau shot himself in 2003 after a newspaper hinted that his restaurant was about to lose its three-star status.

And Benoit Violier ended his life in 2016 just months after his Swiss restaurant was named the best in the world in the La Liste ranking.