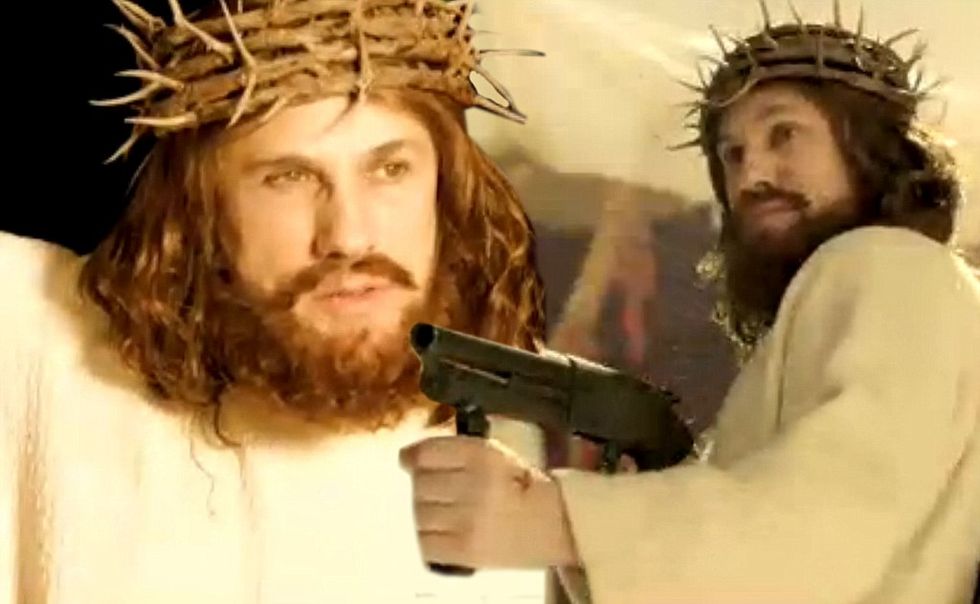 Just ask Bonnie and Mikey Weinstein, co-founders of the Military Religious Freedom Foundation, who regularly receive messages like these:

I’m the mother of 4 God fearing children of the Lord Jesus Christ. Do your kids and the Lord’s whole green earth a favor today and choke to death on a chicken bone. You’re a servant of Satan and deserve the flames which surely await you. 2 Peter 2:4. 1 Thessalonians 2:15

Ye better be able to grow eyes in the back of your head jewboy. Lovers of Christ will not be taking anymore of your menacing in the military. Christ’s message of salvation will conquer your kike attacks as Christ was victorious over the Pharisees.

PLEASE, do every real US citizen (ie true patriots) a huge favor & point a loaded 1911 at your temple and pull the trigger. If you’re too chicken-shit to complete the task, I volunteer to assist.

Why the vitriol and threats? The Military Religious Freedom Foundation defends the 250-year-old separation between church and state in the US military. Their legal team and volunteers jump into action in response to calls and emails from soldiers—either individuals or groups—who are being pressured to participate in the religious beliefs and practices of chaplains, superior officers or colleagues–beliefs that they don’t share.

It happens more than you might think: Fliers on plates in a dining hall. Bible verses on walls. Prayers at all-hands meetings. Inspirational lectures with a message of salvation. Speeches denigrating religious minorities or the nonreligious. Awkward invitations to a commanding officer’s Bible study or church. A decade in, MRFF says they have represented more than 50,000 clients—pushing back against violations large and small. Some Bible believers take that personally.

MRFF goes bulldog no matter who commits the violation. But the vast majority of their time is spent fending off fundamentalist Evangelical Christians that are exploiting the military hierarchy or public spaces and events to promote their form of Bible belief. Why center on fundamentalist Evangelicals? Because Jews, Hindus, Muslims, atheists, Wiccans, and even mainline Christians typically aren’t consumed with “sharing” their “good news” and questing for converts. In fact, the vast majority of MRFF clients are moderate Christians who value separation of church and state and their own spiritual privacy on the job.

Fundamentalist Evangelicals, though—especially in the military—are caught between a rock and a hard place. In their role as soldiers, their mission is to defend the United States including the American traditions of secularism and religious pluralism. But most religions teach that serving the will of God should take precedence over all else including any loyalties to nation or profession, and Evangelicals believe that the Bible commands them to win converts.

The word evangel literally means good news, by which Christians typically mean the notion that Jesus died for your sins so that you don’t have to be tortured forever in hell. Evangelical means centered on this salvation message, and evangelism means persuading other people that they too can be saved if only they believe. Where mainline Christians may elevate a Bible passage called The Great Commandment (love God and love your neighbor as yourself), many Evangelical churches elevate a passage called The Great Commission (go into the world and make disciples of every creature). In an individual life, prioritizing one or the other can make a world of difference.

The perceived biblical mandate to win converts means that some fundamentalist Evangelicals feel threatened by anything or anyone that obstructs this mission. And when members of the military blow past the founding fathers, laws, and military regs in their quest to serve Jesus, MRFF is one organization that steps in their way.

When you step in the way of fighting men and women, it should be no surprise that some of them react, not by self-reflecting but by fighting. What may surprise many people on the outside, though, is just how ugly that can turn. Christianity makes people better, right? The Church is a moral light unto the world. The fruit of the spirit are love, joy, peace, temperance, longsuffering. Christians turn the other cheek. They are generous and kind, just like Jesus himself. That’s what most Christian kids are taught in Sunday school, which is one reason Islamism looks violent when contrasted with (this idealized version of) Christianity.

But ideals and realities are two different things, and Christianity, like Islam, has always had a dark side. For both, that has always included divinely sanctioned death threats. The very same exclusive truth claims that motivated Christianity’s crusades, purges, inquisitions, executions, forced conversions, centuries of vomitous anti-Semitism, and hostility toward other religions still hold full force in some minds. Skeptical? Read Bonnie Weinstein’s latest book of hate mail from Christians to the Military Religious Freedom Foundation: When Christians Break Bad. Here is a sample to get you going.

Sharing the Gospel of the Son of God with our nation’s young war heroes was just an innocent picnic of love for sinners to learn how to rid themselves of sin through Christ. It could only be jacked up by some hell bound hook nose. With an anti-christian agenda of hate towards Jesus Christ.

Our military is sacred to Jesus and your fucking it up trying to take the only Son of God out of it. . . enjoy the sulfur fumes as your are consumed in the Lake of Fire for your 2nd death – Revelations 21:8

There is only 1 country which is the most pure and precious to Jesus and that is the USA. Our soldiers are soldiers for Christ. No separation of Jesus and state in the constitutions. We don’t need no queers or jewboys and sand niggers to bring down are once proud red white and blue.

Your organization is no different than those enemies of America. Why don’t you move to those countries and join the Jihad! You’re a disgrace to Americans who have died for your freedom . . . . May Jesus Christ have mercy on you . . . Cause I know conservative American Christians would love to watch you suffer.

Jews have that certain smell

you know, Mikie. That jew smell of murdering the innocent Lamb. The son of God. . . . Try as you might to keep Jesus out of our military you will just even more nail yourself to the cross of satan. And you will burn in hell forever. Every day will be a Dachau day for you. Every night will be a Kristallnacht. For all eternity. . . . Hell smells like Jews.

You need to be locked up and waterboarded until you accept the Lord Jesus Christ as the full sinner you are.

. . . hope you die in front of your kids and burn in hell for the apostasy you fuckers are. MAKE AMERICA GREAT AGAIN!

Are these emails—and the hundreds more like them and related images posted at the MRFF website—representative of how Christians think and behave? Of course not. They are not typical of even Evangelicals or fundamentalists, some of whom count themselves among MRFF clients. But they are a sobering reminder of Christianity’s dark side—and of the similar darkness in any ideology that makes exclusive truth claims, promotes division, competes for converts, and demonizes people who get in the way.