'Gym got owned': Internet applauds Jake Tapper for 'spanking' Jim Jordan with his own molestation scandal 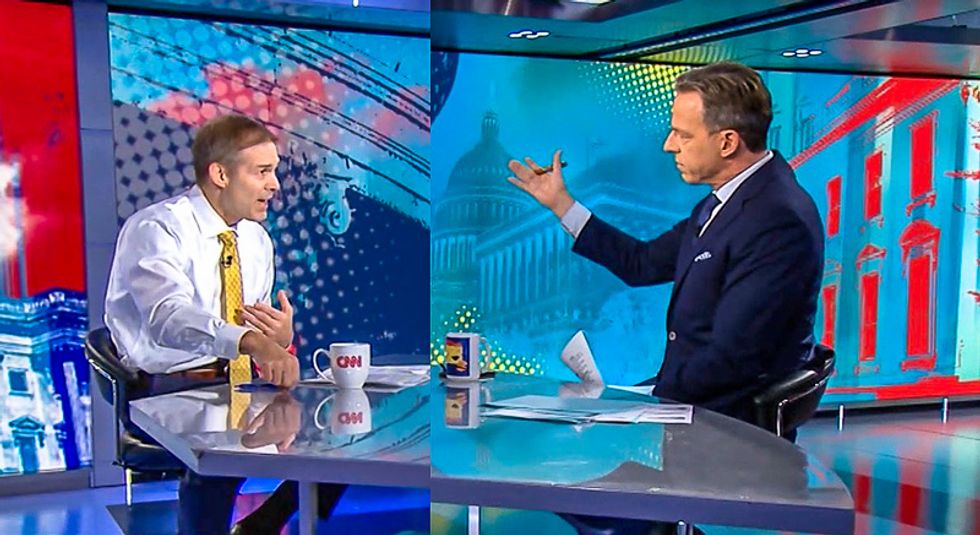 Internet users took to social media on Sunday to thank CNN host Jake Tapper after he called out a Republican congressman's hypocrisy on impeachment.

During an interview on CNN's State of the Union program, Rep. Jim Jordan (R-OH) claimed that a whistleblower came forward to report alleged wrongdoings by President Donald Trump because "he didn't like the president."

"These folks are bound and determined to go after the president," Jordan ranted.

Tapper pointed out that there is "no evidence" that the whistleblower had any bias against the president.

"It's amazing the gymnastics you guys will go through to defend the vice president," Jordan insisted.

"It's a fact," Tapper shot back. "And I would think that somebody that's been accused of things in the last year or two would be more sensitive about throwing out wild allegations against people."

The Internet quickly cheered Tapper for referring to allegations that Jordan turned a blind eye to a molestation scandal in Ohio.

Watch the video and read the responses below.

Jordan was trying his best to run roughshod over Jake Tapper and kudos to Jake for pointing this out. https://t.co/WlqA7hzkxi
— b bright (@b bright) 1569780955.0

@GOPChairwoman @Jim_Jordan We all was the @jaketapper interview with #GymJordan. LMAO. Makes me wonder why the GOP… https://t.co/ic2M2DAqzd
— Annabelle Leigh (@Annabelle Leigh) 1569780997.0