'He started this': CNN's Cuomo obliterates pro-Trump lobbyist for defending the decision to exit the Iran deal 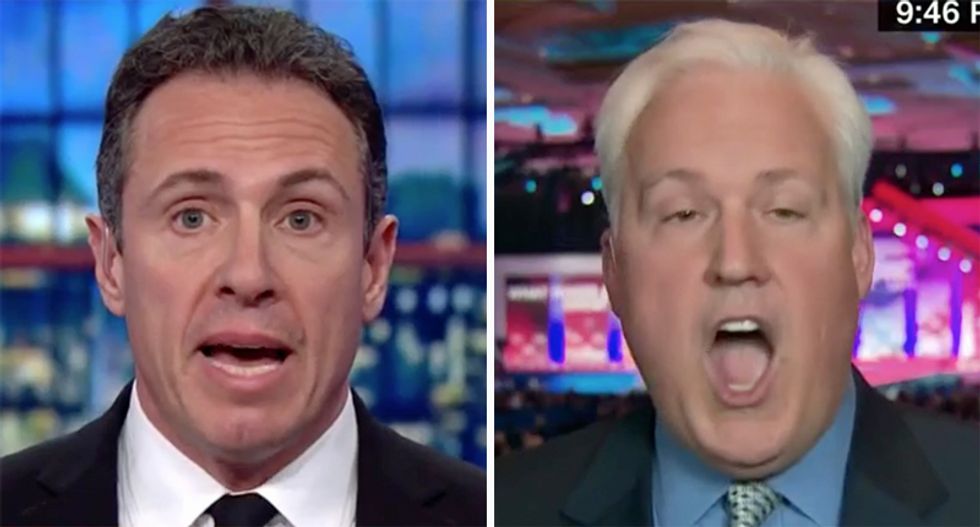 On Monday, following the attack on Saudi oil facilities that President Donald Trump says was carried out by Iran, CNN's Chris Cuomo clashed with pro-Trump lobbyist and American Conservative Union director Matt Schlapp by pointing out that it was Trump who escalated tensions with Iran in the first place.

"Now this is something of his own reckoning," said Cuomo. "He blew up that Iran deal ... He had nothing to replace it with. He just thought doing this is disruptive, this is why they brought me here. He loosed that company on the Middle East. They are vindictive and old and savvy as we both know as students of history. He started this. This is maybe the biggest threat to his presidency, Matt."

"Obama let loose $150 billion in assets to the Iran regime, the number one funder of terror," said Schlapp. "You can make an argument of whether they had a legal right to that. That money will go to fomenting jihad around the globe. I urged the president to pull out of the Iran deal. The Iran deal that we had had no proper verification."

"It is true," insisted Schlapp.

"No, it is not true," shot back Cuomo. "It had more verification we had before it."

"We had to give them notice before we could walk in any facility so they could cover their tracks," said Schlapp. (This is not true — the deal mandated inspections of any declared site within 24 hours, and undeclared sites within two months, none of which would give Iran time to cover up radioisotopes.) "Presidents of both parties did this. We didn’t want a confrontation with North Korea so we tried to extend the timeline by which they would nuclearize. It’s a similar policy Obama approached with Iran, extend the time and hope that something changed."

"You had a deal, multi-coalition, big countries that Iran had to worry about," said Cuomo.

"Iran would have a nuclear weapon at the end of that term," said Schlapp.

"That's not true," said Cuomo. "It was only about enriching, it was a decade and now you have nobody looking at what they’re doing. They ran around in Syria, they’re doing it in Yemen in a situation out of control and now they’re bombing his buddy in his backyard, if that’s true."

"People love the idea that a treaty was somehow going to keep Iran in a box," said Schlapp. The fact is a lot of people — and I will say I was one of them — believed that that treaty was an appeasement to Iran. It gave them funding to do all this around the globe. We should try a different way ... Just like North Korea. Do you agree that on North Korea it would be better if we had taken steps 10 and 20 years ago to prevent North Korea from getting a nuclear weapon?"

"I don’t believe we can look back that way," said Cuomo.

"So it’s inevitable and there’s nothing you can do?" said Schlapp.

"That just delayed the time they get the nuclear weapon," said Schlapp.

"It delayed the window, but gave you a pause and gave you something to work with," said Cuomo. "You removed it and have nothing, except you think Iran would have bombed — if that’s true and the president says he believes it’s true because U.S. officials are telling him."

"What is true?" said Schlapp.

"That Iran was behind what happened in Saudi Arabia," said Cuomo.

"I can’t know," said Schlapp. "I know what I read and it appears that’s the case."

"That’s what the president said and that’s what he says what the officials say," said Cuomo. "That takes us to another issue, will the people believe the American people."