'Heartless and unconscionable': Outrage as General Motors cuts off healthcare for 50,000 striking workers 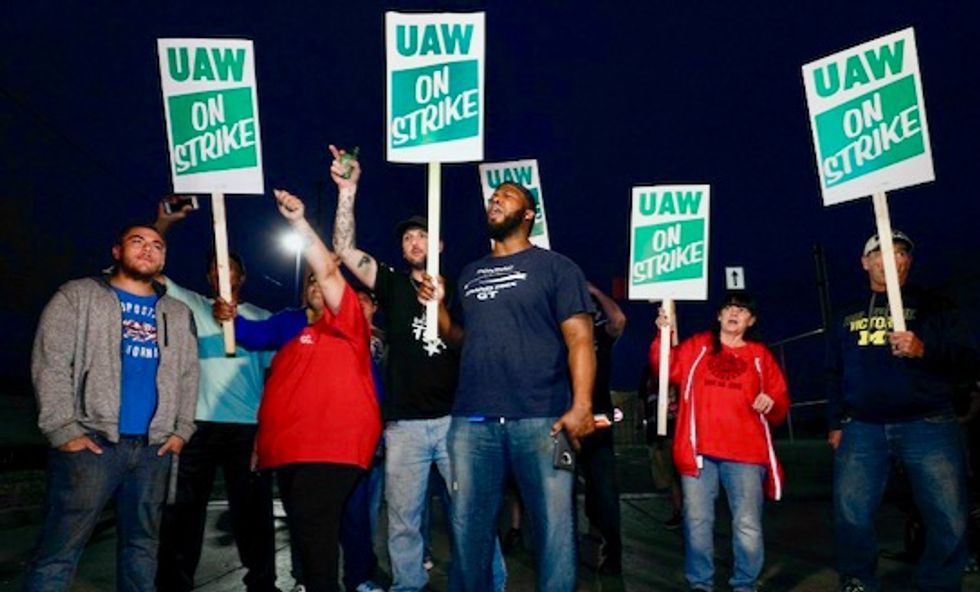 "It is cruel and outrageous that GM has cut off the healthcare benefits from their employees in a blatant attempt to force the union into submission," said Sen. Bernie Sanders.

In a move critics said exposes both the particular cruelty of General Motors executives and the systemic inhumanity of the American healthcare system, GM on Tuesday stopped covering health insurance premiums for the nearly 50,000 auto workers striking for fair wages and decent benefits.

The move shifts healthcare costs to the United Auto Workers (UAW), which will be forced to reach into its strike fund to pay the bills. As HuffPost reported, UAW negotiators on Monday sought to confirm with GM that workers' benefits would be covered through the end of the month. Hours later, GM said the benefits have been terminated.

"A note to anyone who wants to use union members as a wedge to oppose Medicare for All: UAW has one of the best plans in the country, but management can still use it to hold workers hostage. M4A puts power back in our hands."

"GM's decision to yank healthcare coverage away from their dedicated employees with no warning is heartless and unconscionable," said Mary Kay Henry, president of the Service Employees International Union (SEIU). "GM's actions could put people's lives at risk, from the factory worker who needs treatment for their asthma to the child who relies on their parents' insurance for chemotherapy."

"The UAW workers on the strike lines are showing immense bravery in the face of intimidation," added Henry.

The auto workers' nationwide strike, described as the largest in more than a decade, began just before midnight on Sunday after negotiations between UAW and GM broke down, with union leaders and members accusing management of proposing insulting wage increases and paltry benefits.

As the New York Times reported, GM is pushing for "employees to pay a greater portion of their healthcare costs" even as the company rakes in record-level profits and massive gains from the GOP tax bill.

Sen. Bernie Sanders (I-Vt.), a 2020 Democratic presidential candidate, said in a statement Tuesday night that GM's decision to stop healthcare payments "is the type of corporate greed that the American people are sick and tired of."

"At a time when the CEO of General Motors has received a $22 million compensation package and top of the line benefits, it is cruel and outrageous that GM has cut off the healthcare benefits from their employees in a blatant attempt to force the union into submission," said Sanders. "I say to General Motors: Restore the healthcare benefits that your workers have earned and deserve."

Speaking to CNN, Sanders said GM's move spotlights the urgent need for a healthcare system under which workers' insurance cannot be yanked away at the whim of corporate executives.

Others echoed Sanders' condemnation of America's privatized healthcare system and call for Medicare for All in the wake of GM's decision:

If we had universal single-payer healthcare, bosses couldn't use denial of insurance as a bludgeon against their wo… https://t.co/ZUQlv7U4JU
— Sarah Lazare (@Sarah Lazare) 1568751764.0

A note to anyone who wants to use union members as a wedge to oppose #MedicareForAll: @UAW has one of the best plan… https://t.co/sPtxHyRrTW
— Sara Nelson (@Sara Nelson) 1568755820.0

GM's move comes as the impasse between the union and management shows few signs of ending.

Steve Frisque, a full-time union steward and committee lead at the GM parts plant in Hudson, Wisconsin, told In These Times that by cutting off workers' healthcare, the automobile giant is "using scare tactics, making people worried about how they're going to make it" through the strike.

"We are also hearing that at big plants like in Flint and Arlington," said Frisque, "GM is planning on busing in what we call scabs into the building to try and do the work. It does look like almost a union-busting type of plan at this point."

"We sacrificed for GM, and now it's time for GM to share the wealth," Frisque added. "They paid essentially no taxes last year, and they act like they're broke. They have made record profits for the last four or five years. When their CEO Mary Barra is making over $20 million and they say they don't have enough money to pay their employees on the floor, then I have an issue with that and I think all of us do."