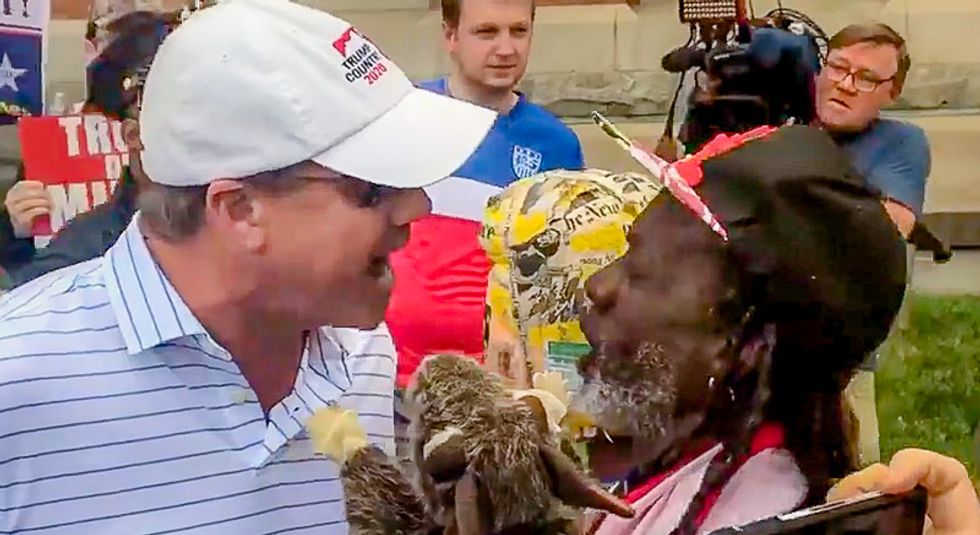 One of President Donald Trump's supporters was caught on video lecturing a Baltimore protester about the president's accomplishments for minorities.

The confrontation took place where protesters were gathered in Baltimore to oppose Trump's Thursday night speech at a Republican retreat.

"Name one thing!" the Trump supporter demands as the video begins.

"Lock us up," the protester replies.

"He actually signed prison reform legislation!" the president's fan shouts in the demonstrator's face. "He's letting thousands of minorities out of prison!"

At that point, a Baltimore police officer interrupts the disagreement.

"I'm going to talk just as loud as his white ass," the protester tells police. "F*ck 'em. Trump and all of them."

"Donald Trump has lowered unemployment to the lowest levels in history!" the Trump fan exclaims. "I don't understand it -- why you don't like him."

"Because he's a pedophile," the protester yells back.

Watch the confrontation below.

Anti-#Trump protestors and pro-Trump supporters get heated ahead of the president’s visit to #Baltimore - warning -… https://t.co/dnwoOjB5nI
— Phil Yacuboski (@Phil Yacuboski) 1568323737.0