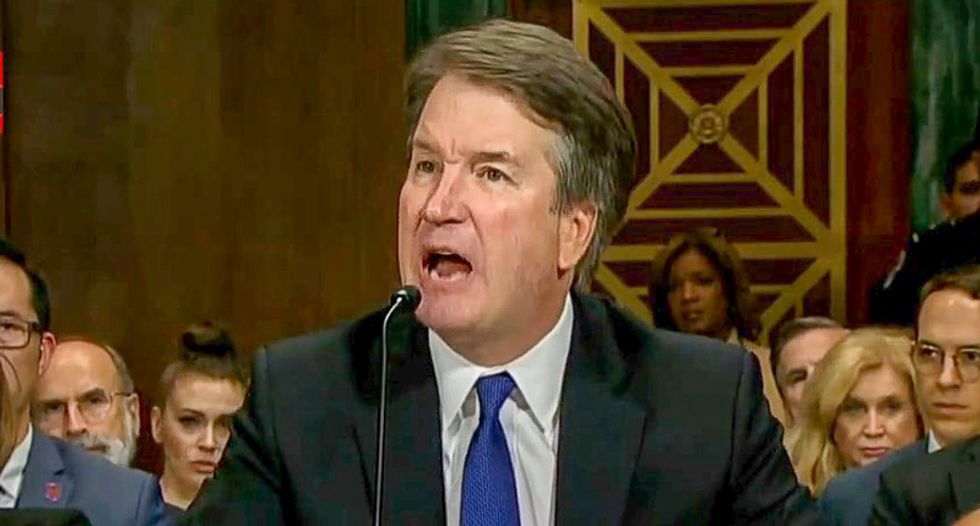 Progressive advocacy groups and 2020 Democratic presidential candidates led the chorus of voices demanding that House Democrats launch impeachment proceedings against Supreme Court Justice Brett Kavanaugh after the New York Times over the weekend published fresh details about sexual misconduct allegations against the judge and FBI failures to investigate complaints made against him prior to his confirmation.

"The evidence that Kavanaugh committed perjury in his Senate testimony is mounting," Demand Justice, Women's March, and Center for Popular Democracy said in a joint statement on Sunday. "Brett Kavanaugh is unfit to sit as a Supreme Court justice in the face of so many credible allegations that he sexually assaulted these women. House Democrats must not delay in launching an impeachment probe."

"During the winter of her freshman year, a drunken dormitory party unsettled her deeply," Times journalists Robin Pogrebin and Kate Kelly wrote of Ramirez. "She and some classmates had been drinking heavily when, she says, a freshman named Brett Kavanaugh pulled down his pants and thrust his penis at her, prompting her to swat it away and inadvertently touch it."

Kavanaugh denied Ramirez's allegation during his Senate confirmation hearing last year. "During his Senate testimony, Mr. Kavanaugh said that if the incident Ms. Ramirez described had occurred, it would have been 'the talk of campus.' Our reporting suggests that it was," wrote Pogrebin and Kelly.

According to Porgrebin and Kelly,

A classmate, Max Stier, saw Mr. Kavanaugh with his pants down at a different drunken dorm party, where friends pushed his penis into the hand of a female student. Mr. Stier, who runs a nonprofit organization in Washington, notified senators and the FBI about this account, but the FBI did not investigate and Mr. Stier has declined to discuss it publicly. We corroborated the story with two officials who have communicated with Mr. Stier; the female student declined to be interviewed and friends say she does not recall the episode.

"This new report corroborates the allegations made by Debbie Ramirez and proves the FBI investigation conducted last year was a sham from the start," said Demand Justice, Women's March, and Center for Popular Democracy. "At this point, an impeachment inquiry in the House is the only appropriate way to conduct the fact-finding that Senate Republicans refused to conduct."

Democratic presidential candidates were quick to join calls for impeachment proceedings against Kavanaugh, who was sworn in last October after being narrowly confirmed by the Republican-controlled Senate thanks to the decisive vote of Sen. Susan Collins (R-Maine).

"Confirmation is not exoneration," said Warren. "Like the man who appointed him, Kavanaugh should be impeached."