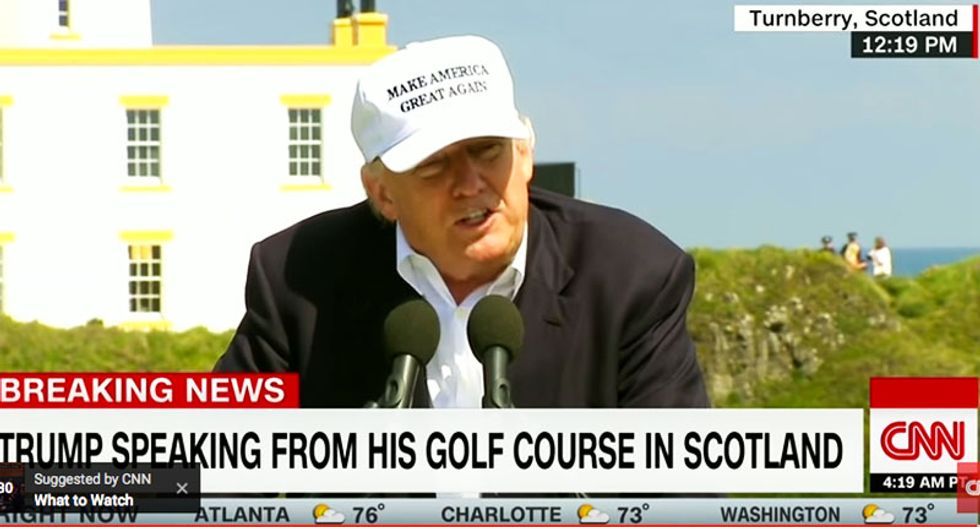 President Donald Trump’s private golf resorts are once again in a scandal after a bombshell report published by Politico on Friday evening.

“In early Spring of this year, an Air National Guard crew made a routine trip from the U.S. to Kuwait to deliver supplies. What wasn’t routine was where the crew stopped along the way: President Donald Trump’s Turnberry resort, about 50 miles outside Glasgow, Scotland,” Politico reported.

The event has been under investigation for over four months.

“Since April, the House Oversight Committee has been investigating why the crew on the C-17 military transport plane made the unusual stay — both en route to the Middle East and on the way back — at the luxury waterside resort, according to several people familiar with the incident,” the report noted.

Military expenditures may be keeping the resort afloat.

"According to a letter the panel sent to the Pentagon in June, the military has spent $11 million on fuel at the Prestwick Airport — the closest airport to Trump Turnberry — since October 2017, fuel that would be cheaper if purchased at a U.S. military base," Politico reported. "Taken together, the incidents raise the possibility that the military has helped keep Trump’s Turnberry resort afloat — the property lost $4.5 million in 2017, but revenue went up $3 million in 2018."

The Pentagon has reportedly provided no answers to congressional investigators.

"On previous trips to the Middle East, the C-17 had landed at U.S. air bases such as Ramstein Air Base in Germany or Naval Station Rota in Spain to refuel, according to one person familiar with the trips. Occasionally the plane stopped in the Azores and once in Sigonella, Italy, both of which have U.S. military sites, the person added. But on this particular trip, the plane landed in Glasgow — a pitstop the five-man crew had never experienced in their dozens of trips to the Middle East. The location lacked a U.S. base and was dozens of miles away from the crew’s overnight lodging at the Turnberry resort," Politico reported.