'How could they do this to us?' Ask Afghan farmers after reporting reveals officials knew civilians were in area of lethal US drone strike 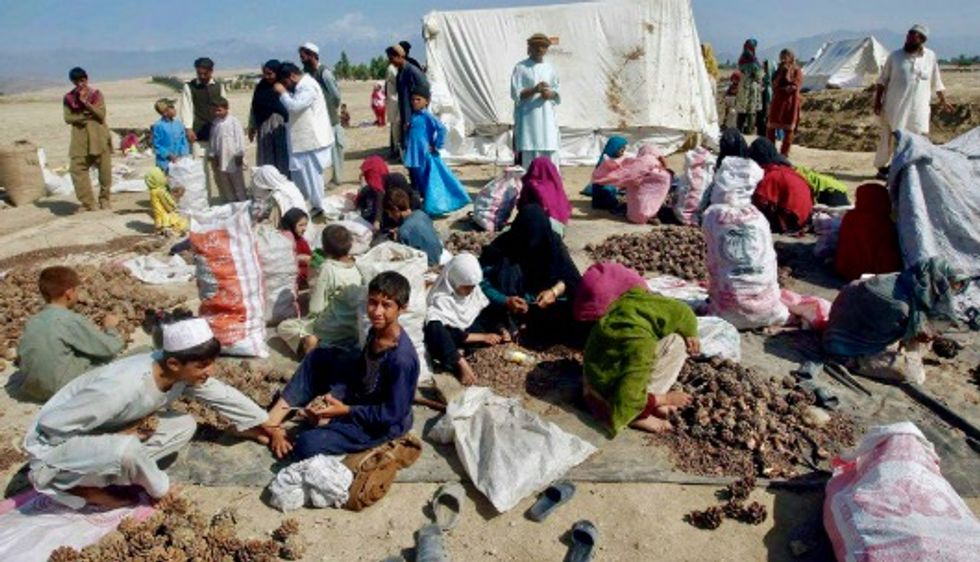 "This is just one of the horrors of endless war."

Afghan officials knew for over a week that civilians were in the area bombed by a U.S. drone strike on Wednesday, raising more questions about the attack that killed 30 farmers and wounded 40 more.

"My son and his friends were killed by the Americans," village chief Malak Khaiyali Khan told Reuters. "How could they do this to us?"

On Thursday, Common Dreams reported on the strike, which was decribed as a "total massacre" by journalist Emran Feroz.

According to Reuters, village elders from the Wazir Tangi area of Nangarhar province on September 7 sent a letter to the region's governor alerting him to the fact they planned to have as many as 200 laborers picking pine nuts.

The letter, seen by Reuters and dated Sept. 7, was sent in an effort to help protect laborers from getting caught in clashes between U.S.-backed Afghan forces and Islamic State fighters in the mountainous terrain largely controlled by the jihadists.

"We had huddled together around small bonfires and we were discussing the security situation in our villages, but suddenly everything changed," said survivor Akram Sultan. "There was destruction everywhere."

As fallout from the attack continued to reverberate around the eastern province, U.S. politicians and progressives condemned the strike.

"This is just one of the horrors of endless war," tweeted Sen. Bernie Sanders (I-Vt.), a candidate for the Democratic party's 2020 presidential nomination.

Attacks like the drone strike lead to more extreme radicalization and opportunities for groups like ISIS and the Taliban to recruit angry victims of U.S. aggression, said Young Turks commentator Hasan Piker.

"We are destroying these countries," Piker said, "and the only people with the infrastructure to fight back are extremist groups who take advantage of the destabilization."