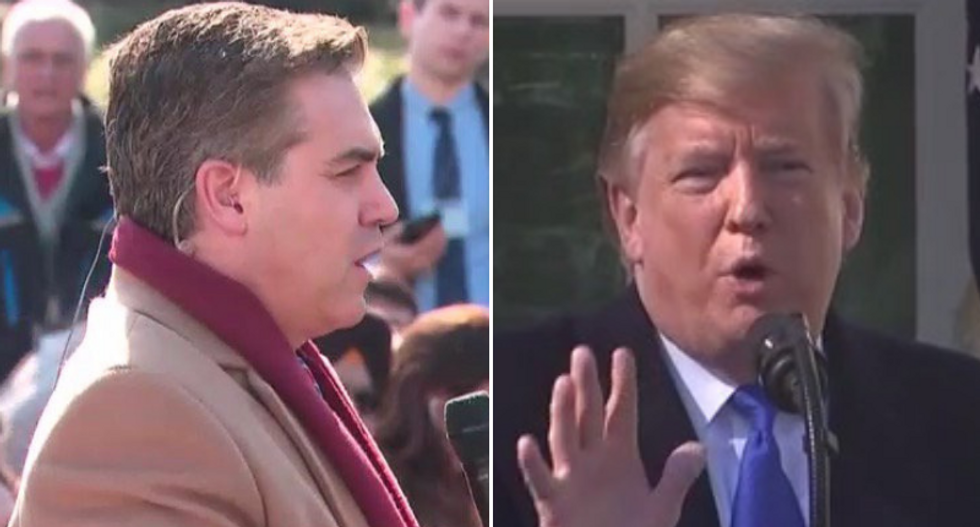 The news wars have nothing to do with a rivalry for ratings between CNN and MSNBC. According to Rolling Stone columnist Matt Taibbi, President Donald Trump is leading the Pentagon to act on his war against the news.

"Fake news and social media posts are such a threat to U.S. security that the Defense Department is launching a project to repel 'large-scale, automated disinformation attacks,' as the top Republican in Congress blocks efforts to protect the integrity of elections," Bloomberg reported over the weekend. "One of the Pentagon’s most secretive agencies, the Defense Advanced Research Projects Agency (DARPA), is developing 'custom software that can unearth fakes hidden among more than 500,000 stories, photos, video and audio clips.'"

Rolling Stone columnist Matt Taibbi explained that DARPA's new program "MediFor" aims to prevent fake images or text from making their way into the news. It doesn't specify if "deepfake" videos will be found through the software. A recent example of a deepfake is the altered Nancy Pelosi speech Trump and his allies pushed out saying that the House Speaker was drunk during a speech. Facebook has already said that it won't remove the video, despite its rule to cut out fake news.

The DARPA program should "horrify" reporters, said Taibbi, but for some reason it isn't.

"From the Senate dragging Internet providers to the Hill to demand strategies against the sowing of 'discord,' to tales of hundreds of Facebook sites zapped for 'coordinated inauthentic behavior' following advice by government-connected groups like the Atlantic Council, it’s been clear the future of the information landscape is going to involve elaborate new forms of algorithmic regulation."

He noted that the idea of "fake news" isn't defined outside of the president's rally rants, Fox News and the Macedonian troll farms. Stories like PizzaGate or the InfoWars conspiracy theories about Hillary Clinton and mass shootings would once be relegated to an ignored corner of the internet. Yet, Trump's war against fake news has only done more to bring it out in the open.

"Even a controversy about Hillary Clinton’s health, cited by Ohio State University researchers as an example of the pernicious impact of fake news, was an amalgam of true and fake," Taibbi recalled from the 2016 election.

When Clinton suffered from a blood clot, mainstream media reported it along with the right-wing conspiracy theories that she was dying, suffering from seizures or had dementia.

"It has the hallmarks of an old-school, WMD-style propaganda campaign," wrote Taibbi. "The most enormous issue posed by the modern media landscape is the industry’s incredible concentration, which allows a handful of private platforms – Facebook, Twitter, Google – to dominate media distribution."

It means news is taken out of the hands of responsible fact-checkers and onto any website with a WordPress theme close to the New York Times.

"What if the same people who can’t tell the difference between Truthdig and Pravda get to help design the new fake news algorithms?" Taibbi asked. "That’s a much bigger worry than the next [Fox News] Paul Horner [story] or even, frankly, the next Russian Facebook campaign. While Donald Trump is in the White House, progressives won’t grasp how scary all of this is, but bet on it: In a few years, we’ll all wish we paid more attention when the Pentagon announced it wanted in on the news regulation business."