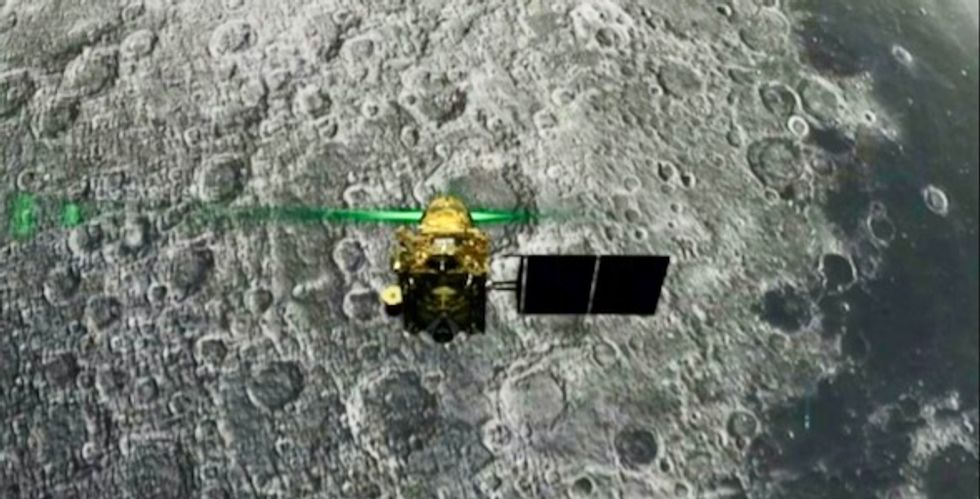 Indian space scientists were desperately trying Tuesday to establish communication with their broken Moon lander, having located the probe that went silent moments before it was due to make a historic soft landing.

The lander, called Vikram -- after the founder of India's space program -- was due to touch down on the Moon in the early hours of Saturday, but contact was lost around 2.1 kilometers (1.3 miles) above the surface.

The Indian Space Research Organization (ISRO) tweeted an update on its Chandrayaan-2 ("Moon Vehicle 2") mission, which blasted off in July with India hoping to become just the fourth country to make a successful soft lunar landing.

The emerging Asian giant's most complex space mission, carrying an orbiter, lander and rover, was almost entirely designed and made in India -- and cost a relatively modest $140 million.

Indian media reports have said that the lander suffered a "hard landing", possibly damaging it and the rover inside.

The Press Trust of India (PTI) news agency reported on Monday that the lander was unbroken but was lying tilted on the lunar surface, and that the chances of restoring communication were low.

"Unless and until everything is intact, it's very difficult (to re-establish contact)," PTI quoted an unnamed ISRO official as saying.

"Only if it had a soft landing, and if all systems functioned, could communication can be restored. Things are bleak," the official said.

The ISRO was not immediately available to comment on the claims.

Only the United States, Russia and New Delhi's regional rival China have made a successful soft landing on the Moon, and India had hoped to be the first on the lunar South Pole.

According to the ISRO, the orbiter will continue to circle the Moon for almost seven years, providing "high resolution images which will be immensely useful to the global scientific community".

India is also preparing Gaganyaan, its first manned space mission, and wants to land a probe on Mars.

In 2014, it became only the fourth nation to put a satellite into orbit around the Red Planet, and in 2017 India's space agency launched 104 satellites in a single mission.

In March India shot down a low-orbiting satellite, prompting criticism for creating "space junk" that could damage the International Space Station, something rejected by New Delhi.