Is Trump aiming for talks with Iran after chucking John Bolton to the curb? 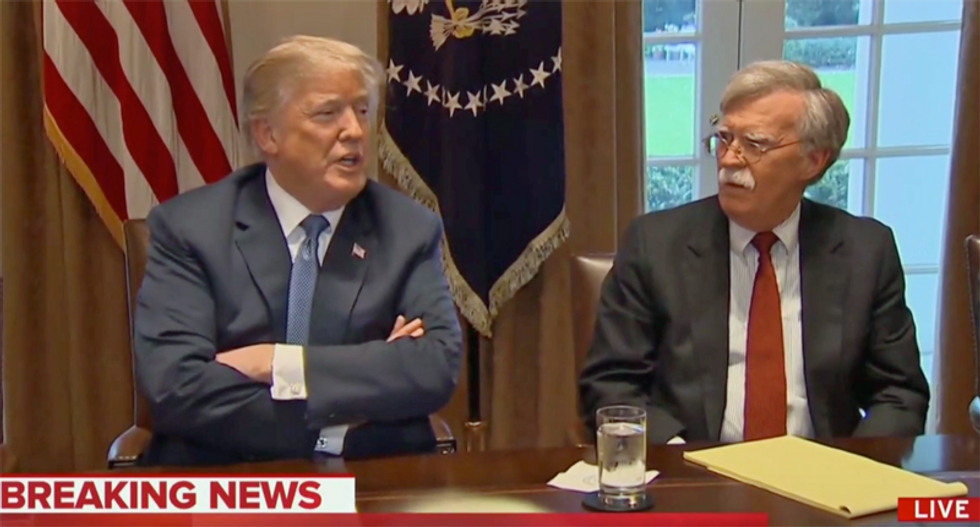 Bolton became Trump’s fourth national security adviser in April 2018, replacing Gen. H.R. McMaster, who had been appointed earlier in the administration to replace former Gen. Michael Flynn, who was forced out in scandal after just a few weeks. Keith Kellogg served as acting adviser between Flynn and McMaster, and is probably grateful no one remembers him.

Bolton stood by Trump’s side a month after his appointment as the president announced he was unilaterally withdrawing from the historic Iran nuclear deal — which Bolton has long opposed, and predicted would never come to fruition just a few months before the Obama administration successfully closed the deal (with the help of other leading nations). Bolton has been an advocate of regime change in Iran for years, and wrote in a 2015 New York Times op-ed that the U.S. had to bomb Iran because that nation "will not negotiate away its nuclear program."

Trump’s more conciliatory tone towards Iran in recent months should have been the clue that Bolton, always a bad fit for this administration, was beginning to sour Trump.

Following the Iranian downing of a U.S. drone in the Persian Gulf in June, Trump approved an airstrike against Iran and then abruptly called off the operation, a move that undoubtedly dismayed Bolton. Now the latter's sudden, if unsurprising exit has prompted speculation that the chances of military conflict between the U.S. and Iran have decreased — so much so that oil prices fell swiftly on Tuesday after Trump’s tweets hit the headlines.

“I informed John Bolton last night that his services are no longer needed at the White House,” Trump (or at least someone using his Twitter account) wrote. “I disagreed strongly with many of his suggestions, as did others in the Administration …”

The White House had recently defended Bolton’s standing and even sent out notice that he would appear with Secretary of State Mike Pompeo and Treasury Secretary Steven Mnuchin at a rare press briefing only an hour before Trump’s tweet. Those two, much more devoted yes-men than the ideologically inclined Bolton, announced that Trump would speak to the Iranians with "no preconditions."  Trump is reportedly even considering giving Iran $15 billion line of credit if the regime comes back into compliance with the deal Obama negotiated and which they were complying with until Trump tore up the deal at Bolton's behest. Bolton is a true believer who wanted to keep the war going in Afghanistan in order to use it as a base to attack Iran.

Bolton had also taken a hard-line position on North Korea, writing in a Wall Street Journal op-ed shortly before coming to the White House that a pre-emptive strike by the U.S. would be “perfectly legitimate.” He was sent to Mongolia on a mysterious errand while Trump became the first sitting president to set foot inside North Korea.

Bolton’s “priorities and policies just don’t line up with the president,” White House spokesman Hogan Gidley told reporters on Tuesday. Pompeo echoed the administration's line while announcing the new stance towards Iran: “There were definitely places Ambassador Bolton and I had different views about where we should proceed.”

Bolton clearly did not appreciate the attempts to further embarrass him following his bitter departure. Instead of simply submitting like previously-canned Trumpites, he fought back.

Bolton released his resignation letter and took to the media to make his case, texting Fox News’ Brian Kilmeade: "Let's be clear, I resigned.” Pressed further by The Washington Post, he said: “I will have my say in due course.”

Bolton’s vow to not go quietly into the night may have something to do with Trump’s reported anger at his unwillingness to support a planned meeting with the Taliban scheduled for the week of 9/11.  The Washington Post has reported that Bolton had fought against peace negotiations with Taliban leaders and the planned meeting at Camp David, while Pompeo was supportive. Trump may well have gotten angry about the bipartisan blowback from the Taliban fiasco and, in Trumpian fashion, punished the adviser who had told him it was a bad idea.

Indeed, the circumstances surrounding Bolton’s departure make it difficult to give Trump much credit. He hired Bolton in the first place, perhaps impressed by the latter's tough rhetoric but without much understanding of his substance. It appears now that Trump is simply trying to get rid of any constraints or checks on power in his decision-making.

Quite likely the president got talked into picking Bolton by Fox News, where Bolton worked for over a decade. Trump surely loved Bolton's praise for the administration’s policies, but he could never get the committed ideologue to pipe down and be a team player once empowered in the White House. Trump is just too fragile to tolerate an actual team of rivals.

NBC News reported after Bolton's firing that Trump had made several phone calls to McMaster, beginning last fall, telling his former national security adviser "that he missed him, according to two people familiar with the conversations":

The president was angered by what he viewed as Bolton's positioning himself in the news media as the decision-maker on key issues like Iran and Venezuela, the officials said, and it didn't help that Trump thought those policies weren't working. ...

When Trump is unsatisfied with a top aide, he sometimes turns to that aide's predecessor, with whom he was at odds and had fired. For example, Trump began calling his first chief of staff, Reince Priebus, when his second one, John Kelly, started trying to get him to do things he didn't want to do.