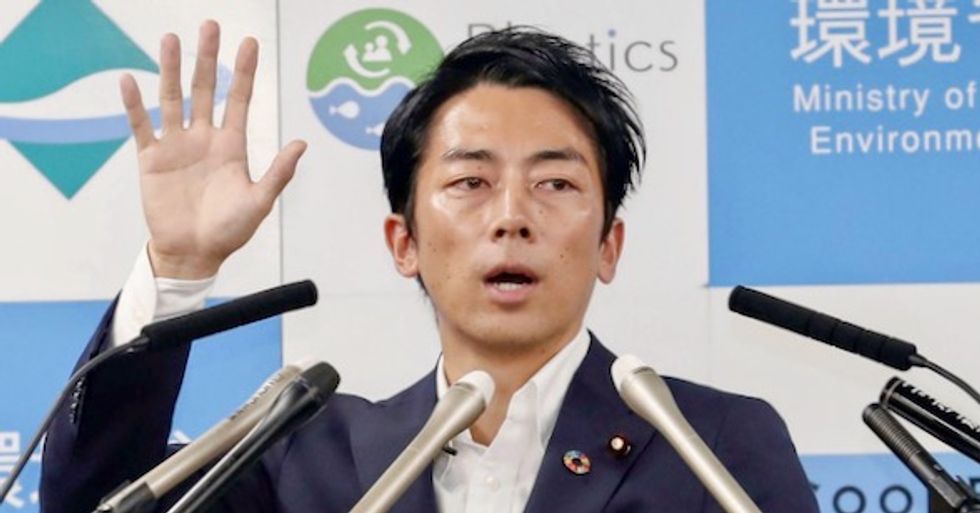 "We will be doomed if we allow another nuclear accident to occur."

Japan's new environmental minister, Shinjiro Koizumi, called Wednesday for permanently shutting down the nation's nuclear reactors to prevent a repeat of the 2011 Fukushima disaster, comments that came just a day after Koizumi's predecessor recommended dumping more than one million tons of radioactive wastewater from the power plant into the Pacific Ocean.

"I would like to study how we will scrap them, not how to retain them."

"I would like to study how we will scrap them, not how to retain them," the younger Koizumi, whose ministry oversees Japan's nuclear regulator, said during his first news conference late Wednesday. "We will be doomed if we allow another nuclear accident to occur. We never know when we'll have an earthquake."

In March of 2011, a powerful earthquake triggered a tsunami that caused the meltdown of three nuclear reactors at the Fukushima Daiichi power plant on Japan's northeastern coast, forcing tens of thousands of people to flee radiation around the plant. It was the world's second-worst nuclear disaster, after Chernobyl.

After the disaster, all 54 of Japan's nuclear reactors were shut down. Reuters reported Wednesday that "about 40 percent of the pre-Fukushima fleet is being decommissioned" and only six reactors are currently operating. Amid drawn out legal battles over the impacts of the meltdown, campaigners have ramped up opposition to nuclear power generation in the country.

However, some Japanese politicians, including the current prime minister, have argued that nuclear energy is necessary to meet national climate goals. Japan's new trade and industry minister, Isshu Sugawara, criticized Koizumi's call to shutter the country's reactors. "There are risks and fears about nuclear power," Sugawara said. "But 'zero-nukes' is, at the moment and in the future, not realistic."

According to The Guardian:

Japan's government wants nuclear power to comprise 20 percent to 22 percent of the overall energy mix by 2030, drawing criticism from campaigners who say nuclear plants will always pose a danger given the country's vulnerability to large earthquakes and tsunamis.

Abe, however, has called for reactors to be restarted, arguing that nuclear energy will help Japan achieve its carbon dioxide emissions targets and reduce its dependence on imported gas and oil.

Despite Abe and Sugawara's stances, "the government is unlikely to meet its target of 30 reactor restarts by 2030," due to local opposition and legal challenges, noted The Guardian.

The Telegraph reported Thursday that Koizumi "was a surprise addition" to Abe's cabinet, considering that the new minister "has expressed sharp differences with senior members of the ruling Liberal Democratic Party since he was first elected in 2009 and supported a rival in the most recent election for party president."

Polls often indicate that Koizumi is considered a popular contender to serve as the next prime minister—and Abe's choice to appoint him to the cabinet, according to The Telegraph, is "seen as an effort to give a new generation of politicians an opportunity to learn the ropes of government."

Koizumi replaced Yoshiaki Harada, who made headlines around the world earlier this week. Responding to a projection from Tokyo Electric Power (TEPCO) that the utility will run out of storage space for contaminated groundwater around the Fukushima plant around the summer of 2022, Harada suggested during a news conference Tuesday that "the only option will be to drain it into the sea and dilute it."

As Common Dreams reported Tuesday, Harada's comments were swiftly condemned by critics of nuclear energy both in Japan and around the world as well as the neighboring government of South Korea.

Watch: Trump bitterly complains that 'somebody leaked' his plans to launch Patriot missiles at Mexican cartels

Mark Esper spent over 15 months as Secretary of Defense in Donald Trump's administration, but that didn't stop the former president from lashing out his ex-Pentagon chief.

During a speech at the America First Policy Institute (AFPI) Hispanic Leadership Conference in Miami, Trump complained about a passage Esper's book A Sacred Oath, published in the spring.