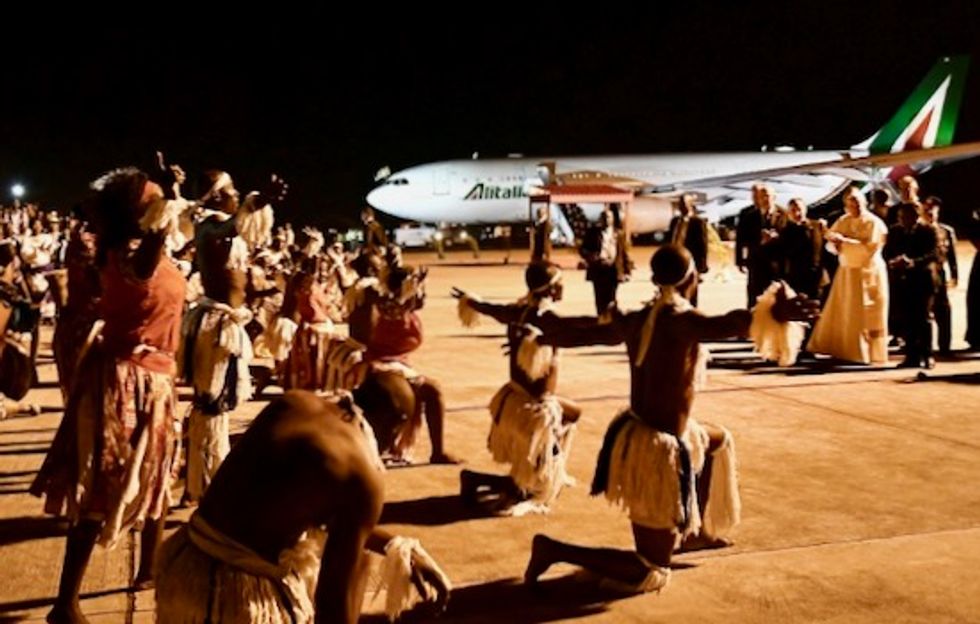 Touching down in Mozambique, Francis was welcomed by a military band and a display of traditional dance AFP / Tiziana FABI

Pope Francis arrived in Mozambique on Wednesday as he kicked off a three-nation tour of African countries, expected to focus on those hard hit by poverty, conflict and natural disaster.

Touching down just after 6:00 pm local time (1600 GMT) Francis was greeted on the tarmac by President Filipe Nyusi, a military band playing the national anthem and a display of traditional dance.

The first pope to visit Mozambique since John Paul II in 1988, he was then whisked away in his popemobile, flanked by police bikes as crowds waved signs reading 'welcome to Mozambique Prophet of reconciliation" and danced in celebration.

He stood in his popemobile and waved at the thousands of faithfuls who lined up along the fringes of the city' main streets as he made the five kilometer (three mile) route from the airport to the Nuncio's residence in the posh Sommerschield suburb, where he will stay during the visit.

On Friday he will address a mass at the giant Zimpeto stadium in the seaside capital Maputo.

The pope is expected to discuss the country's fragile peace process, the devastation caused by two back-to-back cyclones early this year, and the upcoming general election.

The three-day visit to Mozambique comes a month after the government signed a historic peace treaty with the former rebel group Renamo, which is now the main opposition party.

The pope may also address the issue of extremism in northern Mozambique where jihadist attacks have claimed more than 300 lives over two years.

"I hope his visit will bring us effective and long lasting peace," said Arnaldo Menezes, a 25-year-old student, referring to the treaty with Renamo.

"We don't want war anymore. I want to be able to travel freely across the country, even in the north," he said.

The pope will also visit the large Indian Ocean island of Madagascar and its much smaller and wealthier neighbour Mauritius -- both situated off the eastern coast of Africa.

Mozambique and Madagascar are among the world's poorest countries and Francis' decision to visit is seen by commentators as an act of solidarity from a cleric who was a frequent presence in the shantytowns of Argentina and is now called the "pope of the poor".

The pontiff will only have time to visit Maputo while in Mozambique, much to the disappointment of those in the central city of Beira where Cyclone Idai killed at least 600 people and left hundreds of thousands homeless in March.

"Although I am unable to go beyond the capital, my heart reaches out to all of you, with a special place for those of you who live in difficult situations," he said in a video message, adding: "You are all in my prayers."

The capital has been spruced up for the visit, with the government spending 300,000 euros ($330,000) for the trip, according to Foreign Minister Jose Pacheco, including repairs to Maputo's cathedral and city roads.

Many locals appear happy to splurge on pope-branded regalia.

Twenty-nine-year-old Catarina Simbine showed off a Pope-branded cloth known as a capulana.

"Me and my fellow congregants from Santa Theresa de Calcutta took about six months preparing for his arrival," she told AFP.

Beatrice Netu, 70, remembered welcoming the pope on his first visit to Mozambique as "one of the biggest privileges of my life".

"I would not be able to handle it if the Pope came up to us and greeted us or touched my hand here where I am standing in the crowd, I would probably faint!"

Former President Donald Trump is the only president in history to have been impeached twice. The number of presidents impeached was already a small number, with only two prior to Mr. Trump. In fact, the former president doubled the number of presidential impeachments after he attempted to shake down Ukraine for dirt on President Joe Biden and incited a riot at the United States Capitol after losing the 2020 election.

Writing Thursday, Rachel Maddow producer Steve Benen wondered why Republicans would be so focused on "expunging" Trump's second impeachment if he wasn't even convicted by the Republicans in the Senate. But the reason comes from the man himself.

An embarrassing slip of the tongue by former US president George W. Bush may have drawn laughter from his American audience, but it raised the ire of Iraqis.

In a speech Wednesday evening in Dallas about Russia's war on Ukraine, Bush called the invasion of Iraq, which he himself ordered, "unjustified and brutal" -- before quickly correcting himself.

The former president gave a speech Wednesday at the Bush Center at Southern Methodist University, where he compared Ukrainian president Volodymyr Zelensky to Winston Churchill, and he inadvertently condemned his own actions nearly 20 years ago that resulted in nearly 4,500 American troops killed and the deaths of countless Iraqis.