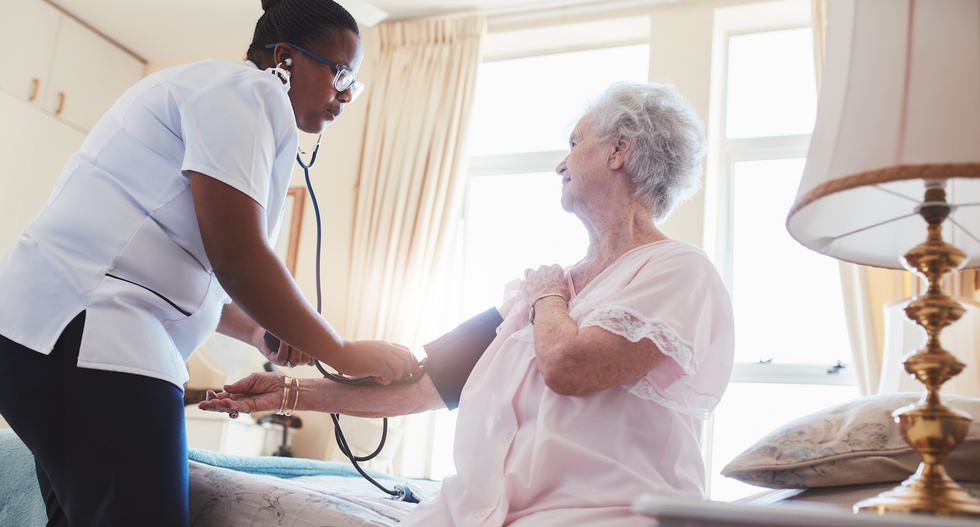 More than 80,000 Kaiser Permanente emergency medical technicians, nurses, respiratory therapists and other staffers are threatening to walk out of work next month, in what could be the nation's largest strike since 1997.

The authorization to strike, approved by 98% of the union members who voted, does not mean a walk out will happen, but it does allow union leaders to call one as early as Oct. 1, giving them leverage ahead of negotiations with the California-based health care giant. Kaiser Permanente, comprised of 39 hospitals and nearly 700 medical officers, serves more than 12 million members in seven states across the country.

The workers, represented by 300 unions, include most non-clinical staff, such as biomedical technicians, medical billers, transcriptionists, receptionists and janitors. If they carry out the move, it would be the largest strike since 1997, when 185,000 United Parcel Service workers walked off the job for 16 days.

Not all of the unions in the coalition have sanctioned a strike yet, but given outcomes elsewhere, the umbrella organization representing Kaiser Permanente workers in a host of unions in several states expects the move to gain support from coast to coast.

Three unions made up of 65,000 Kaiser Permanente workers in California, Colorado, Oregon and Washington have already voted to authorize a strike next month. Another four unions comprised of 15,000 Kaiser Permanente workers in California, Maryland, Virginia and the District of Columbia are expected to cast similar votes by Sept. 22. The employees are represented by more than 12 local affiliates of the Service Employees International Union, Office and Professional Employees International Union and International Federation of Professional and Technical Engineers.

The union members, who bargain together as the Coalition of Kaiser Permanente Unions, allege the non-profit health care giant has been outsourcing and automating union jobs, understaffing facilities, raising patient premiums, and is seeking to reduce worker wages and benefits in union contract negotiations — despite bringing in more than $11 billion in profits since January 2017, sitting on $38 billion in reserves and paying its CEO $16 million a year.

"I've been working there for over eight years. When I got hired there, it was the premiere place to work. But in the past few years, I've noticed that they've become really profit focused and that's really affected the work environment," Eric Jines, a radiologic technologist at Kaiser Permanente Los Angeles Medical Center, told Salon. "The idea of affordable health care, which is in their mention statement, they haven't been fulfilling it."

Kaiser Permanente has argued the coalition's demands are unfair to its members and the communities it serves.

Kaiser Permanente has proposed guaranteed wage increases of 3% across the board each year through 2022. It's unclear what pay increase the coalition is seeking, but union members have stressed the issue extends beyond their concerns over reduced worker wages and benefits, citing worries over management's future outsourcing of jobs.

The Coalition of Kaiser Permanente Unions is also alleging the giant health system has departed from its mission and is focused more on enriching top executives than its workers and patients. They argue Kaiser Permanente serves few Medicaid recipients, far less than other non-profit health plans, even though it receives billions of dollars in tax breaks for serving the public interest.

"My patients are suffering. They can't see a doctor due to long wait times. They stopped taking in many Medicaid patients, they've been outsourcing our jobs, breaking down our partnership. It seems like they care more about profits than their patients," Jeffrey Taylor, a medical assistant who has been working at Kaiser Permanente Sacramento Medical Center for 15 years, told Salon.

"When I started with Kaiser, we had good staffing. The partnership (between management and employees) was there. They came to labor management meetings prepared and we discussed our concerns. Right now, they're making all of the decisions at up and it's really affecting the patients and workers," he added. "I want to make sure Kaiser comes back to the way they used to be. They lost their way. They need to come back and care about the community, care about the patients and care about their workers."

On Labor Day, Harris, a 2020 presidential candidate, and Waters rallied with more than 2,500 Kaiser Permanente workers and their allies at a protest in Los Angeles, where they decried alleged unfair labor practices and good paying jobs.

The Denver City Council, the Los Angeles Labor Federation and 90 faith leaders in California have also expressed support for the looming walk out.

As the threat of the strike looms, Kaiser Permanente is facing increased scrutiny. Earlier this month, California Gov. Gavin Newsom, a Democrat, signed a bill requiring the health care behemoth to disclose its finances on a per-facility basis.

"This law arms employers and others with the information they need to fully understand why the cost of their health insurance with Kaiser Permanente may be rising," said state Sen. Richard Pan, a Democrat from Sacramento and the measure's author.

Ahead of the impending worker strike, management has agreed to sit down with the coalition for a bargaining session on Sept. 16, Sept. 23 and Sept. 24 to work out a new contract, a spokesperson for management told Salon. The last contract expired nearly a year ago. In December 2018, the National Labor Relations Board charged Kaiser Permanente with refusal to bargain in good faith.

The last time Kaiser Permanente workers held a strike was in December 2018. At the time, thousands of psychologists, therapists, social workers and psychiatric workers from more than 100 Kaiser Permanente facilities across California walked off the job for five days to demand management allocate more resources to mental health services.