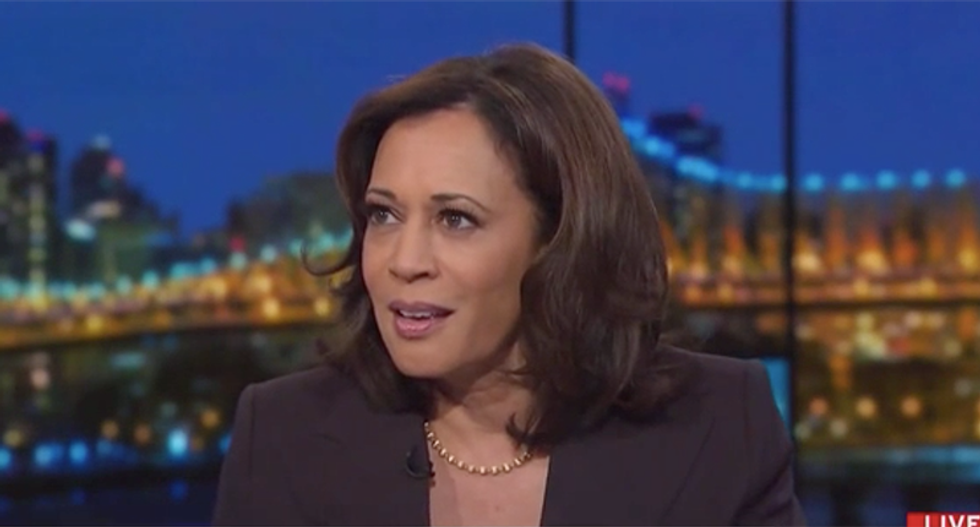 Sen. Kamala Harris (D-CA) speculated that any investigation done through the impeachment of Justice Brett Kavanaugh would likely be far from ethical or accurate. Still, however, Harris wants to see it happen.

"The invisible/not so invisible hand of the White House was basically orchestrating, choreographing, curating, what the Judiciary Committee would learn about this nominee to serve for a lifetime on the highest court in our land, a court that is supposed to do the work of justice, a court where inscribed in the marble that houses it," Harris told Maddow on Monday.

She said that government buildings proclaim "justice under the law" but when given an opportunity to ensure exactly that, the U.S. Senate had a "sham" hearing while the FBI did a "sham" investigation into complaints about Kavanaugh.

"And when we talk about expecting that people will have a sense of respect for the system of justice, we have to recognize that the process by which he was confirmed has created a crisis of confidence in that court," Harris said. "So, yes, I’ve called for impeachment. There — I believe that is the clearest way for us to get an investigation of these allegations and we should open an investigation of these allegations, and I know some have said, 'Well, it’s probably going to go nowhere because it will come over to the Senate if the House returns articles of impeachment and then it will go nowhere in the Senate because we’ve seen the majority in the Senate, you know, frankly, coddle the misbehavior of this president.'"

She went on to say that in the end, it comes down to the American people and the faith in the system of justice.