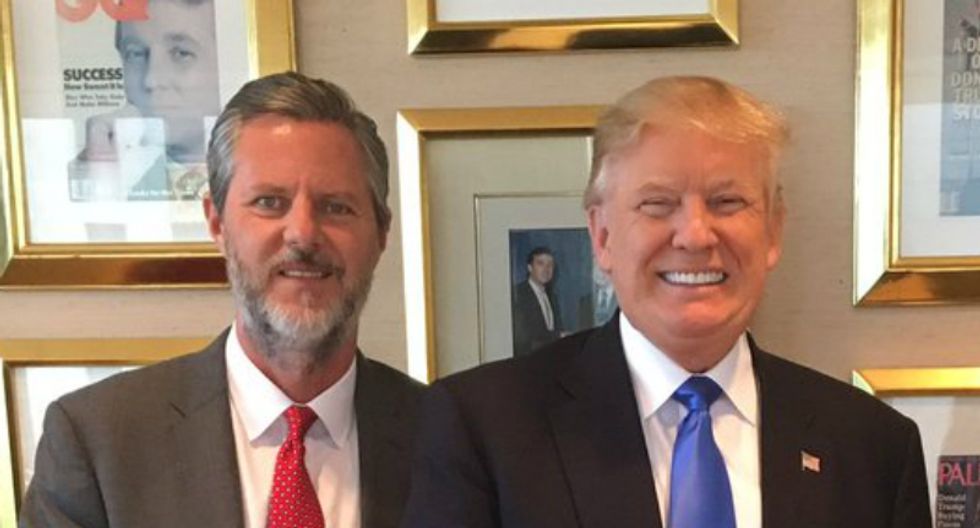 Jerry Falwell Jr., took over the evangelical Liberty University when his father died in 2007. Today, his myriad controversies—from his embrace of Donald Trump to the bizarre tale involving him, his wife and a pool boy—are threatening to spark a civil war at the institution.

"Fallout from a legal dispute led to a series of bombshell reports about Falwell, which unearthed wacky details about, in the words of the New York Times, 'the friendship between Mr. Falwell, his wife, and a former pool attendant at the Fontainbleau hotel in Miami Beach; the family’s investment in a gay-friendly youth hostel, and purported sexually revealing photographs involving the Falwells,'" Egger writes.

He points out that recent stories about Falwell Jr. in Politico and Reuters indicate Liberty insiders are leaking embarrassing information to reporters. The Reuter's story contained nasty emails Falwell had written about students and faculty. In one, he called a student “emotionally imbalanced and physically retarded." He also denigrated the police chief as a “half-wit.”

Eggers observes that whoever leaked the emails does not have a lot of faith in Falwell's leadership. "Somebody, or some group of somebodies, wants Falwell out," he notes. "The dispute is partly personal—Falwell certainly doesn’t come across as a guy who’s a good leader and manager in those emails—but also partly ideological."

He notes that Falwell's tenure has not been entirely unsuccessful: he's upped enrollment, possibly grooming future right-wing leaders. Yet, his vulgar demeanor—confirmed by the leaked emails—makes him an uneasy fit in the evangelical movement.

Egger observes that Falwell is very similar to Donald Trump in this way. "In other words, the argument for evangelicals supporting Falwell as president of Liberty bears a strong resemblance to the argument Falwell pioneered for evangelicals supporting Donald Trump as president of the United States," he writes. "You don’t have to like everything he gets up to; in fact, plenty of it you’re probably better off not knowing about. But he’s the kind of guy, the argument runs, that you want in your corner when the chips are down."

But that can easily backfire. "Because the trouble with having a guy like Falwell or Trump running your institution, is that there’s always a danger that the institutional brand is consumed by the individual’s personal brand."

"A few years more of that, and what brand beyond Fallwellism will Liberty have to call its own?" he asks.