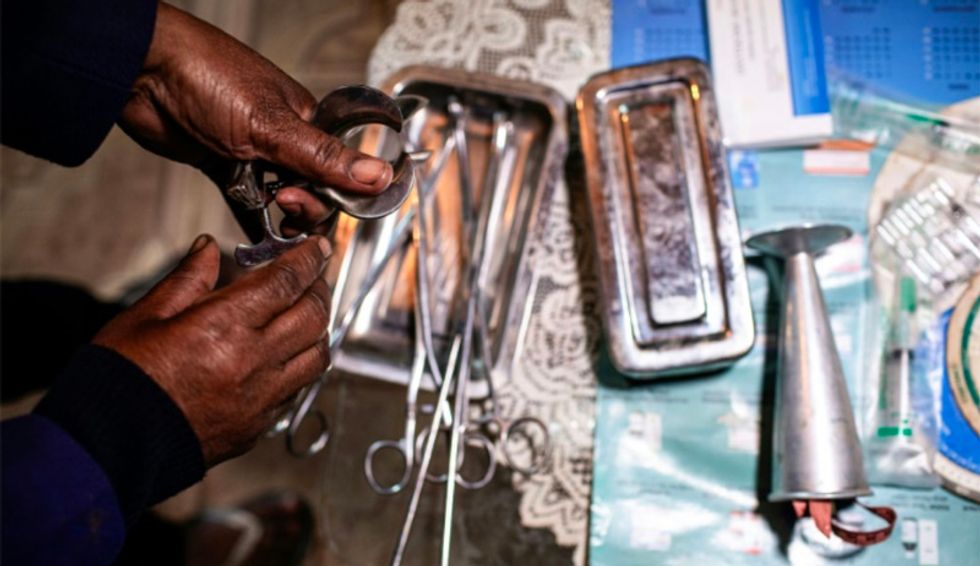 Volatiana keeps her secret behind a flimsy wooden gate, tucked along a red brick wall at the back of her vegetable garden in Madagascar's Antananarivo.

"There are around eight foetuses buried here," said the Malagasy mother of six, standing on a narrow patch of land hidden behind a corrugated metal sheet.

With them lies a baby delivered prematurely at seven months, she added.

"He was wailing when I put him in a plastic bag."

Volatiana, who did not wish to use her real name, had carried them all. When they were removed from her body, she felt only relief.

"I felt a sense of release," she said. "Having another baby would be hell."

Abortion is illegal on the island state of Madagascar, a majority-Christian country that Pope Francis is set to visit next week as part of his second trip to sub-Saharan Africa.

Termination here is punishable by 10 years in prison, and banned even when pregnancy results from rape.

Prosecution remains rare. But an attempt to decriminalise abortion was pushed back by parliament in 2017.

With mouths to feed, no running water and an alcoholic husband, Volatiana, 44, says she has "had enough".

When she gets pregnant, abortion is her only way out.

And she is not alone.

One in four women in Madagascar have terminated their pregnancies, according to pro-abortion group Nifin'akanga.

These women, who come from all social backgrounds, abort between two and eight times over the course of their lives, said Nifin'akanga co-founder Mbolatiana Raveloarimisa.

The association takes its name from a powerful blue-flowered herb that is often used in backstreet abortions.

Volatiana knows several abortionists -- "angel makers", as they are known.

Dety, an illegal abortionist whose name has been changed for this article, infuses avocado leaves for her clients to drink.

She then enters them with a tube or a ball of nifin'akanga and massages their abdomen to provoke contractions. The procedure takes up to three days and can be excruciating.

Another abortionist is a retired midwife, Lucie, whose method is faster and less painful.

She delivers her services at home, over a blood-stained tarpaulin amid the pungent smell of urine.

She gives antispasmodic medication and then pulls out the foetus using a speculum and pliers.

With a meagre monthly income of just 140,000 ariary -- 60,000 lower than the minimum wage -- Volatiana can only afford the services of Dety, but calls on Lucie if she suffers complications.

"I wait for Friday to abort so that I don't miss any days of work," said Volatiana, who works as a maid.

"Over the weekend I continue drinking the infusions and massaging my stomach," she said, wincing at the memories. "When I'm about to abort I ask the children to play outside."

Surrounded by squalor, she thanks God for being alive.

"Once I aborted twins. I almost died."

Abortions and miscarriages kill an average of three women per day in Madagascar, according to Lalaina Razafinirinasoa, country director for the British-based family planning NGO, Marie Stopes International.

Each year the charity provides post-abortion care to 200,000 women.

Many suffer bleeding and infections after inserting themselves with banana peels, nifin'akanga, clothes hangers, bleach and ash. They are treated in public hospitals.

"Our duty is to cure rather than castigate."

Raveloarimisa says treatment as opposed to prevention is simply "hypocrisy".

"Why not take charge of women before all these complications arise, rather than sending them to a slaughterhouse?"

The country of 26 million has a fertility rate of more than four children per woman. It has one of the highest rates of demographic growth in the world, of 2.7 percent.

Volatiana could use contraception, but family planning is almost non-existent in Madagascar. Getting an appointment would cost her half a day's work.

"The barriers are financial, cultural and linked to the availability of contraceptives," said Razafinirinasoa.

While some public hospitals provide birth control, their numbers remain insufficient. Marie Stopes estimates that around one fifth of women who wish to use contraception have no access to it.

The main reason is lack of money.

"2,000 ariary is maybe half the daily income of a street vendor," said Razafinirinasoa.

Many women are influenced by rumours about contraception leading to weight gain, malaria and cancer. And others face pushback from their husbands.

In Malagasy society, "the man is a semi-God" and "woman must bend to his wishes", said Raveloarimisa.

Volatiana said her husband turned violent if she refused his sexual advances.

In a country whose leaders are highly influenced by the Pope, pro-abortion groups are urging Francis to take a new stance on the practice during his visit.

"Why is it that someone who has no uterus, no daughter and not even a wife has laws to dictate on women?" said Raveloarimisa, struggling to contain her outrage.

"Sometimes I lay flowers there. I pray that they will understand why I chose to do what I did."