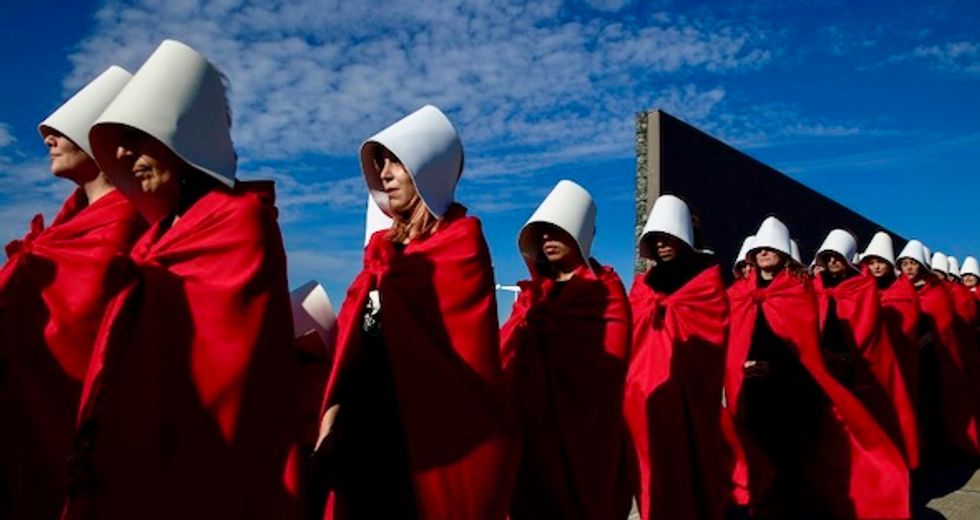 Margaret Atwood released the much-anticipated sequel to her award-winning 1985 novel "The Handmaid's Tale" on Tuesday, with "The Testaments" set to become a similar smash.

A terrifying, misogynistic dystopia set in the US northeast in the near-future, "The Handmaid's Tale" has been turned into a major television series and has become a feminist rallying point for the #MeToo generation.

Fans flocked to Waterstones' flagship bookstore in Piccadilly, central London, where Atwood, 79, read from her new novel to around 400 avid followers who could get their hands on the book at midnight.

"It's very accurate with what's going (on) at the moment, where the world is heading and that's kind of scary," said 27-year-old Melisa Kumas, from the Netherlands but living in London, who wore a red handmaid's outfit.

"It may be a bit of a warning to the people."

The sequel has already been nominated for the 2019 Booker Prize, one of the English-speaking world's most prestigious literary awards.

Its predecessor, which was nominated for the 1986 Booker Prize, was turned into a film in 1990, an opera in 2000, and an award-winning television drama series, which first aired in 2017.

The show has boosted sales of the novel, which has shifted eight million copies worldwide in English alone.

In the original novel, the United States has become the Republic of Gilead, a totalitarian religious state where women are sexually subjugated.

More than 15 years on from the events of "The Handmaid's Tale", the oppressive theocratic regime maintains its grip on power, but there are signs that it is beginning to rot from within.

The lives of three radically different women converge in the novel.

Two, Agnes and Daisy, grew up in the first generation since the new order took over, while a third, Aunt Lydia, wields power through the ruthless accumulation and deployment of secrets.

Aunt Lydia was a character in "The Handmaid's Tale", while Agnes and Daisy also cropped up. They are the daughters of the first novel's protagonist and narrator June, who goes under the slave name Offred.

When the new story begins, Agnes lives in Gilead, while her sister lives in neighbouring Canada and is appalled by the human rights abuses being perpetrated across the border.

But the third narrator in particular holds the reader in suspense: the Machiavellian leader of the Aunts -- the group of women responsible for training and policing the handmaids.

The reader discovers her past as a free woman and her transformation into a monster through her survival instinct in the face of tyrannical men, and her aspiration for power to get her revenge.

Canadian writer Atwood took more than three decades to create the sequel, inspired by questions asked by her readers about the characters in the first book.

"Thirty-five years is a long time to think about possible answers, and the answers have changed as society itself has changed," Atwood wrote in the novel's acknowledgements.

"Countries, including the United States, are under more stresses now than they were three decades ago."

The TV adaptation has brought "The Handmaid's Tale" to a new audience.

The handmaids' white hats and red dresses have become a symbol of feminist struggles such as abortion and women's rights campaigns in countries such as Argentina, Hungary, Ireland and Poland.

In the US, they have become an emblem of the anti-Trump and #MeToo movements.

Debbie Wythe, 57, a carer from Woking, southwest of London, is a new fan who came especially for the book launch.

"I just want to get my hands on it. I love books, to touch and smell it! I hope there is a happy conclusion in a way. I want to be hopeful and optimistic."

Ghouls and spirits draw Taiwanese crowds to exhibition of underworld

Hopping vampires from China and disembodied flying heads and organs from Thailand have enticed hordes of people to an exhibition in Taiwan, scandalizing religious groups who have called for the show's cancellation.

Ticket sales had to be temporarily suspended twice on opening day to avoid overcrowding inside the Tainan Art Museum on the island's south-western coast, with thousands waiting in line for a chance to see the gory display.