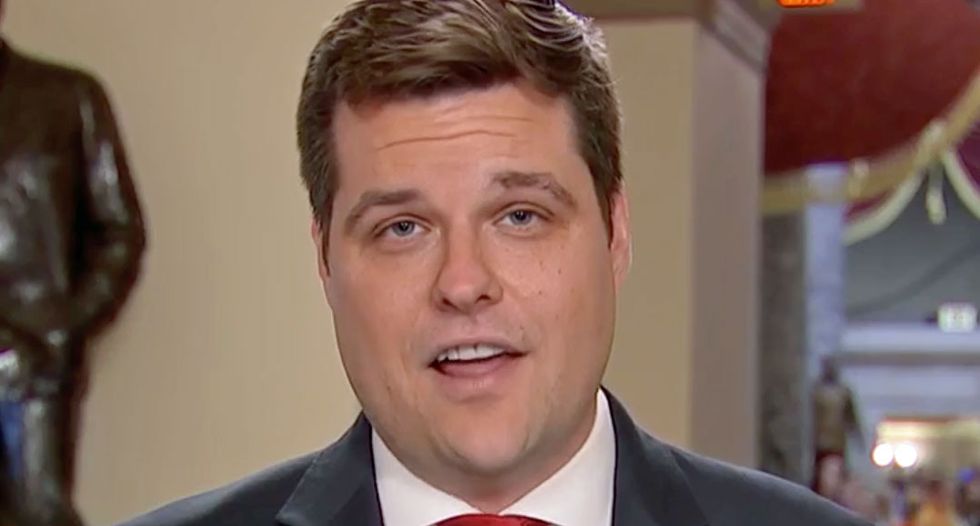 Rep. Matt Gaetz (R-FL) on Wednesday quickly clammed up after he accidentally revealed that he and his fellow Republican lawmakers got a sneak peek at the White House's summary of a phone call between President Donald Trump and Ukrainian President Volodymyr Zelensky.

During an interview with MSNBC's Hallie Jackson, Gaetz tried to dismiss the incredibly damning summary of the call, which showed Trump repeatedly pressured Zelensky to open an investigation into potential 2020 rival Joe Biden.

In the course of defending the president, Gaetz said that he "had a chance to review the transcripts and chat with the president about them."

"Were you at the White House?" Jackson asked.

"Yeah, we went over to the White House," Gaetz said.

"Who's 'we'?" Jackson replied. "You and Democrats, you and Republicans?"

Hallie then pressed Gaetz on whether there were any Democrats at the meeting, and Gaetz just replied that it was "a group of legislators."

Washington Post reporter Ashley Parker has since confirmed, however, that Republicans were given a preview of the call readout before it was released to the public.

"The White House invited a dozen Republican lawmakers to the White House to review the transcript before it was released to the public -- and to discuss among themselves and ask questions of White house officials," Parker reported. "At one point, Trump called in from New York."