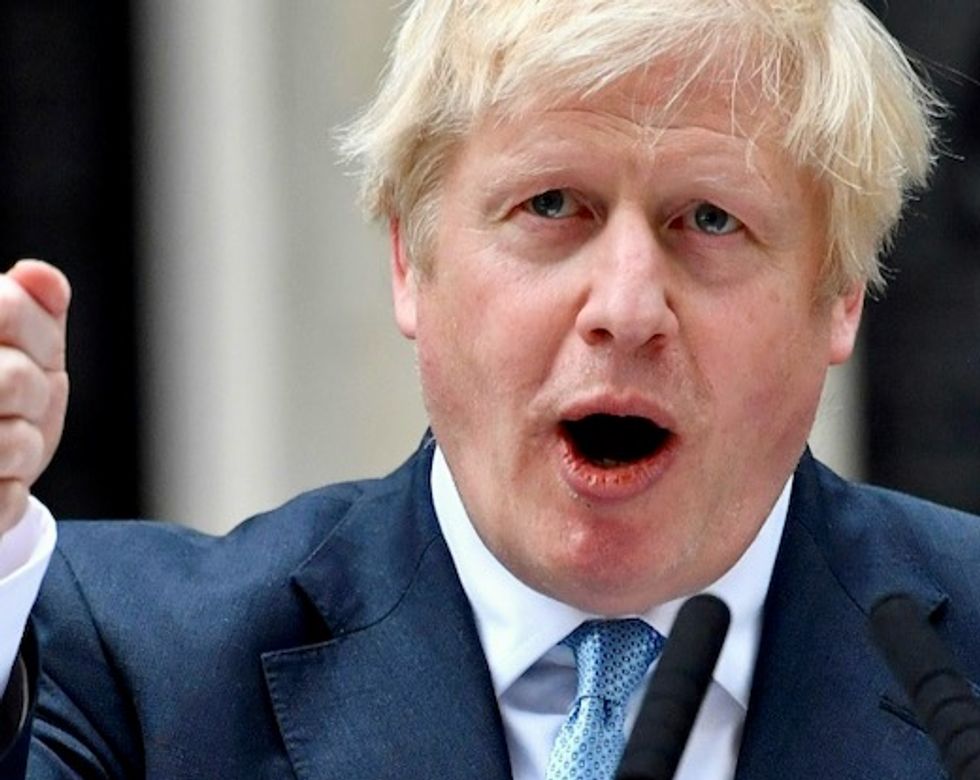 MPs voted by 311 to 302 for a motion by a rebel Conservative MP demanding the government publish all documents relating to Operation Yellowhammer, the codename for preparations for a no-deal Brexit.

The House of Commons vote came after a stormy week in which lawmakers passed a law undermining Johnson's threat to leave the European Union on October 31 without having first agreed a deal with Brussels.

In yet another day of drama in Westminster, House of Commons speaker John Bercow announced he would be stepping down by October 31 at the latest.

That came ahead of another expected defeat for Johnson, with MPs poised to reject for a second time his call for an early election to break the political impasse over Britain's future.

Many MPs are deeply opposed to Johnson's threat to end Britain's 46-year-old membership of the EU at the end of next month without agreeing any new arrangements.

In Monday's vote, MPs also asked the government to publish communications, including WhatsApp messages and private emails, from certain advisers relating to Johnson's decision to suspend parliament for five weeks.

The motion is not legally binding but is politically difficult to ignore.

The prime minister says the so-called prorogation is a routine move to allow his premiership, which only began in July, to start afresh with a new legislative programme.

'It's extraordinary that parliament is being shut down at the very moment the Brexit crisis is at its peak,' says Labour's Hilary Benn

But MPs see it as an attempt to silence them in the run-up to Brexit and believe documents will prove it.

Government minister Michael Gove warned their "desire to rifle through private correspondences of advisers is to set aside legal precedent and the rights of citizens".

'Downgrade parliament at our peril'

Britons voted in June 2016 to leave the EU but after three years of political wrangling, parliament still cannot decide how to implement the decision.

Johnson says he is working to revise the deal agreed by his predecessor, Theresa May, which MPs rejected – but insists Brexit must happen next month no matter what.

However, he has no majority in the House of Commons, having expelled 21 MPs from his own Conservative party last week for voting for the rebel legislation.

The bill, which became law on Monday, would force Johnson to delay Brexit to January or even later if he cannot get a deal with Brussels at a crucial EU summit on October 17-18 – or persuade MPs to back no deal.

In response, the PM called a snap election for early next month, but MPs refused to support him – and a second attempt later on Monday also looks doomed as it is opposed by opposition leaders.

The turmoil deepened when Bercow announced that he will step down by October 31 at the latest, with a few shots aimed at the government in his speech.

John Bercow announces he will stand down as Speaker at the next election or on 31 October, whichever comes first

"We degrade this parliament at our peril," he warned lawmakers, to a sustained standing ovation from opposition MPs – and little or no applause from stone-faced cabinet members.

Eurosceptics dislike Bercow for a perceived anti-Brexit bias, but he has been praised by supporters for sticking up for parliament's right to have a say in the tortuous Brexit process.

He fought back tears as he thanked his wife and children for their support during his 10-year tenure.

‘No backstop is no deal’

Johnson had earlier visited Dublin for talks with his Irish counterpart Leo Varadkar, a key player in the search for a Brexit deal.

MPs rejected the current agreement three times earlier this year, in large part because of its provisions to keep open the border between British Northern Ireland and EU member Ireland.

Johnson wants to scrap the so-called "backstop" plan, which would keep Britain aligned to EU trade rules long after Brexit to avoid any checks at the frontier.

But the EU accuses him of offering no alternative.

'A very bad day for Boris Johnson in Dublin and in parliament,' says Viviane Gravey, lecturer in European Politics at Queen's University Belfast

"Common ground was established in some areas although significant gaps remain," the two leaders said in a joint statement following an hour of talks.

Varadkar told Johnson that he must make specific proposals on the future of the Irish border if there is to be any hope of averting a no-deal Brexit, saying Dublin cannot rely on simple promises.

"In the absence of agreed alternative arrangements, no backstop is no deal for us," Varadkar told reporters. "We are open to alternatives, but they must be realistic ones, legally binding and workable and we haven't received such proposals to date."

South African police were on Monday combing a township tavern where 21 teenagers mysteriously died as survivors described a battle to escape the jam-packed premises and one reported a suffocating smell.

Most of the victims, some as young as 13 years, were found dead inside a popular bar in the southern city of East London.

Five of the 35 House Republicans who voted to investigate the Jan. 6 insurrection are facing primary challenges on Tuesday, after a series of bombshell hearings on Donald Trump's involvement in the effort to overturn his election loss.

So far, 12 of those GOP lawmakers have won or advanced in their primary elections, while two have lost and nine others have retired or resigned, and those results suggest Republicans can survive their vote, reported the Washington Post.